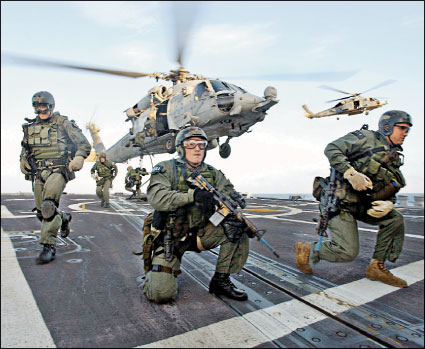 Sniper shots heard around the world blasted onto newspaper headlines and into TV news coverage just as we were putting the finishing touches on this issue. The news that U.S. Navy SEAL snipers had taken out three pirates who were holding America ship Captain Richard Phillips hostage was met with cheers in our offices, as they were by all freedom-loving people. The wounding of the first pirate at took place at night, shortly after the SEALs had parachuted into the waters beside the USS Bainbridge warship and deployed on the ship’s fantail. The episode took place in the terrorist-ridden seas off the coast of the near-lawless African nation of Somalia.

The capabilities of the SEALs in taking on such a precise strike with the world at attention came as no surprise to TW, who were going to press with special features on the training of Navy SEAL Special Operations personnel and the introduction of new sniper rifles currently getting the attention of military brass.

Defense Secretary Robert Gates has announced a major shift in the Pentagon’s spending, notably cuts on conventional warfare and futuristic military technology. Only time will show if the Obama Administration acted wisely by cutting America’s defense spending that includes 1.4 billion for missile defense, 11.3 billion for new helicopters, and F-22 fighter jets at 140 million each. Sadly, these cuts not only effect the future of America’s national security but also impact defense industry jobs and advancement in technology that has historically created practical benefits for the civilian sector (Does anyone still use formed plastic? Thank the private military defense industry for that one.). Like the heroic SEALs that rescued Capt. Phillips from Somali pirates, those in uniform will continue to serve above and beyond—doing whatever it takes to accomplish their mission.

Leading our coverage of weapons is the McMillan TAC-50 sniper rifle, an extreme-range sureshot with documented kills out to 2,430 meters. Lighter sniper rifles are getting a lot of attention these days as eight rifles battle to become the SOCOM PSR contract winner.

Speaking of firepower, wait until you see the Dragon—the Dillon Aero M134D Minigun, a new fire-spitting beast. Some “minigun”! It’s actually a Gatling gun with a cyclic rate of 3,000 to 4,000 rpm. Another rifle in our features is the Paramilitary Peacekeeper Sa vz. 58P 7.62 x 39mm being used by the Iraqi National Police. In the always-interesting Light Machine Gun group, we have the KAC Stoner, a SAW LMG that’s 10 pounds of pure bite.

Swooping into battle from the sky is the awesome Apache BLOCK III attack helo, while on the ground S.W.A.T. teams are getting a supreme ride from the Lenco BearCat armored vehicle.

The all-important shotguns of military and police are covered in features on the USMC M1014 combat shotgun, and in a detailed look at upgrading pump combat shotguns to take on any mission.

In addition to our in-depth look at Navy SEAL training and their weaponry, we have a behind-the-scenes feature on the training of the officers of the elite, NYPD Emergency Service Unit, the “E-Men” as they are called, ready to take on any attack that may happen in The Big Apple, 24/7.

As they have dating back to Pearl Harbor in December, 1941, attacks on America and Americans always make us stronger, not weaker. Our Navy SEALs have just proven that once again. 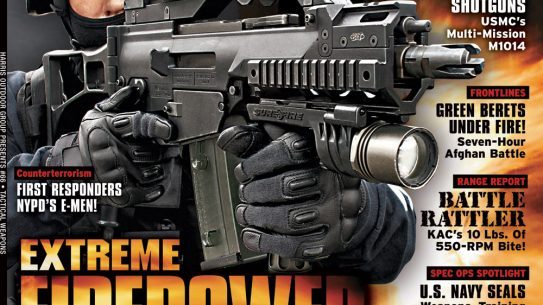