by Jon Sundra
in Guns, Rifles
0

0
SHARES
50
VIEWS
Share on FacebookShare on Twitter
Fluted barrel, smooth bolt action, camo stock—what more could Savage add to the Model 16 Bear Hunter for you to feel confident in bear or whitetail country? Most bruins taken in North America are black bears, for which Savage’s Model 16/116 Bear Hunter in any of the three calibers offered is plenty of rifle.

Over the years, I have written a good many bear hunting stories, as well as articles on bear guns and cartridges, but in all that time I never came across a specific model that was officially designated as being a “Bear Rifle”—until now. It seems the folks over at Savage Arms have come up with a rifle in which they’ve incorporated features that they consider to be particularly well suited to bear hunting—even narrowing it down to just two specific calibers.

Are there, in fact, certain features that make a rifle better suited than others for hunting bears? Well, the first thing we have to establish is the kind of bears we are hunting. I don’t know about you, but if I’m hunting brown/grizzly, I want something in the .375 H&H category, so given the two calibers this gun is chambered for—.300 and .325 WSM—I have to assume we’re talking black bears, which probably comprise 95 percent of the bruins taken annually. So, having established that, let’s take a look at what the Savage folks consider the ideal gun for Ursus americanus.

Officially designated the “Model 16 Bear Hunter,” it’s simply a variation of the company’s flagship Model 110 bolt-action rifle. Since its introduction in 1958, the 110 has gone through many minor design changes, but it’s still the same basic action, whether it’s a Model 112, 114 or 116, indicating it’s based on the standard/Magnum-length action, or a Model 10, 12, 14 or 16, indicating the short version. It’s really one of the more intelligent nomenclatures used to indicate various models. 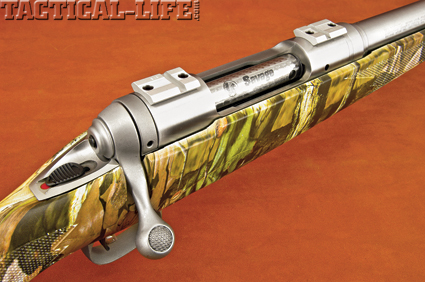 Over the last couple of years, Savage Arms has incorporated many changes to its flagship rifle, and many of them can be seen in the Bear Hunter. As this gun’s “16” designation indicates, it’s based on the short receiver, specifically, the one that’s designed around the WSM family of cartridges. As such, the bolt face, magazine and feed rails differ from the two other short-action models designed around the .223 Rem. and .308 Win. cartridge families.

The defining features of this rifle are several. For one, it sports an all-stainless barreled action that carries a compulsory matte finish. The catalog specifications show the barrel, which is fluted, as being 23 inches in length, but it’s actually 21.5 inches because threaded to its muzzle is Savage’s on/off adjustable muzzle brake, which is standard on this model. Unlike conventional brakes, this one consists of two tubes, one inside the other. Both are drilled with 12 rows of 0.13-inch-diameter holes, three to a row, 36 holes in all. The outer sleeve rotates just enough that at one setting the holes are aligned, and as such form 36 vent holes that act like a conventional muzzle brake. When the outer sleeve is rotated, the holes are no longer aligned, i.e. they’re sealed; therefore, gases are no longer vented and the recoil reduction effect is nullified. It’s a clever idea that works well.

One of the changes recently adopted for this particular model is a new bottom metal unit that features a hinged floorplate and also does away with the unsightly sear extension that juts up in front of the bolt—a feature that goes all the way back to the original design. Apparently, though, this new BM unit is not compatible with all iterations of the Savage action because all five of the company’s Target series, which are based on the solid-bottom (single-shot) receiver, retain the sear extension. 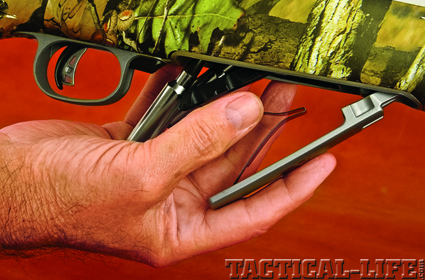 The other thing I like about this bottom metal unit is that the magazine is long enough to digest cartridges loaded to an overall length of 3 inches, whereas with most other short-action rifles it’s 2.75 inches. Granted, it’s of no concern for non-handloaders, but an important detail for those who roll their own and want to extract every last FPS they can. The shallower a bullet is seated, the more room there is for powder.

Like most 110-series rifles, the AccuTrigger is standard on this model, which means that it is user-adjustable down to 2.5 pounds. You can adjust the trigger with a small tool that comes with the gun, but to alter the trigger pull the barreled action must be free of the stock. The trigger on the test gun, which was chambered in .300 WSM, broke at 3 pounds even, which is just about right for a hunting rifle.

Also standard on this model is the Savage AccuStock, but it’s not the AccuStock that was introduced a couple of years back. The original system consisted of an imbedded aluminum chassis that they claimed exerted pressure on the receiver in three dimensions: vertically, laterally, and fore/aft. The latter was accomplished with a floating, tapered metal block that sat directly in front of the recoil lug slot, which had a vertically-oriented Allen-headed screw through its center that was accessible through a hole at the bottom of the stock. The front surface of this wedge block was angled slightly and matched a similarly angled surface at the rear of an aluminum rib that ran the length of the forend. With the bottom metal unit removed, inserting an Allen key into the hole to engage this floating block and tightening it forced this wedge block rearward against the recoil lug, pushing it against the recoil shoulder. Conceptually, it was no different from the Ruger 77 with its angled front guard screw that pulls the barreled action rearward as it’s tightened. The stock on the test gun had no aluminum bedding block, nor did it have the floating wedge, so I don’t see how they can continue to claim pressure dynamics in three dimensions.

Having eliminated the external sear extension, which also served as the bolt release, that latter function is now the job of a sliding button at the front of the triggerguard bow. At first glance, it looks like a release latch on a conventional hinged floorplate. Sliding the button to the rear while depressing the trigger allows the bolt to be removed. To disassemble the gun, you must slide this button rearward to expose the rear action screw; otherwise, it’s completely hidden from view.

Rounding out the package is the injection-molded synthetic stock finished in Mossy Oak’s Infinity pattern, fitted with one of those soft, mushy buttpads that are so effective at reducing felt recoil. The test gun weighed a substantial 8.44 pounds straight from the box, complete with Weaver bases installed. For a scope, I chose a medium-range variable, a Swarovski 3-9×36. 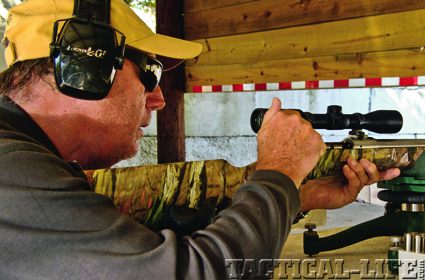 Most black bears are taken over bait, where ranges are short and a scope of 3 or 4X is more than adequate. However, in some western states and western Canadian provinces, hunting over bait is not allowed, so glassing opposing slopes and stalking can require some long, cross-canyon shooting where a scope of 8 or 9X can come in handy. I have to confess, though, that of the 15 bears I’ve taken over the years, none to my recollection was more than 125 yards away, so a 3-9X variable is a good, practical choice. With the Swarovski on board, the test gun weighed 10 pounds on the nose—not at all bad if you’re in a treestand, but a mite heavy for lugging up and down those western mountains.

Once I got to the range, a couple of things about the magazine came to light. With most rifles having hinged floorplates, the cartridge feed rails are machined into the bottom or the receiver. This unit, however, employs a separate sheet-metal magazine that is affixed to the bottom metal unit, and from which the feed lips are formed. The metal is thin enough that cartridges are loaded into the magazine by pushing them straight down; they do not have to be slid back under the feed lips. In other words, the feed lips have enough spring to them that cartridges can be forced through them into the box.
What I didn’t expect was that, although I was able to cram three rounds into the magazine, I couldn’t push the stack down far enough to close the bolt on an empty chamber. Sure enough, when I checked the specs, magazine capacity was listed as two. That means that to have a two-shot repeating rifle, you have to drop one down the gullet and close the bolt over the two rounds in the box. If you want to carry the rifle with an empty chamber, you’ve got a two-shot rifle. 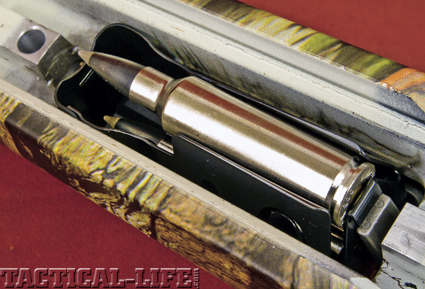 The Model 16 Bear Hunter magazine can handle cartridges up to 3 inches in length.

Interestingly enough, Savage also offers a Model 116 Bear Hunter based on the long action; it’s chambered only for the .300 Win. Mag., and its magazine capacity is three. That, of course, is because the belted Magnum case is of lesser diameter than that of the beltless WSM.

I could not quite match the three-shot 0.7-inch target that was packed with the rifle, but I came awfully close a couple of times using both the same Winchester Supreme 150-grain Ballistic Silvertips used to fire the factory target and Federal’s 150-grain Nosler Ballistic Tip. Both averaged just under MOA for four 3-shot groups on a 100-yard target. And that was with a 9X scope under real-world conditions—not a test tunnel where’s there’s no wind or mirage and scopes of much higher magnification are used. The gun did not like the two 180-grain loads as well as the 150s, but averaging 1.63 and 1.88 inches, both were still well under MOB (Minute of Bear). Bottom line: This is one very accurate .300 Magnum.

I was a little surprised that there was no appreciable difference in accuracy or point of impact between groups fired with and without the muzzle brake. There is a noticeable difference in recoil, but in deference to other shooters at the range, I used the brake only enough to qualify my previous statement. Our shooting benches are under a metal roof, which makes muzzle blast all that much worse (I wore ear plugs and ear muffs!). Personally, I love muzzle brakes on any Magnum-class rifle if I’m testing it off a bench, but I will not have one on any hunting rifle of mine because you can’t hunt with ear muffs or plugs. At least I can’t. I’ve already lost too much of my hearing and I don’t want to lose any more. With this gun you don’t have to choose—you can have both.

Appropriately enough, it was Savage’s PR guy, Bill Dermody, who was first to harvest a bruin with a Model 16 Bear Hunter while hunting in Maine with Spruce Mountain Guide Service. Bill chose the Model 16 in .300 WSM—just like the test gun.

So, can Savage’s Bear Hunter rifles live up to their stated purpose? Of course they can, in any of the three calibers offered. But they are just as well suited to a lot of other types of hunting and game—deer, east or west; antelope, caribou, moose—just about any North American critter.