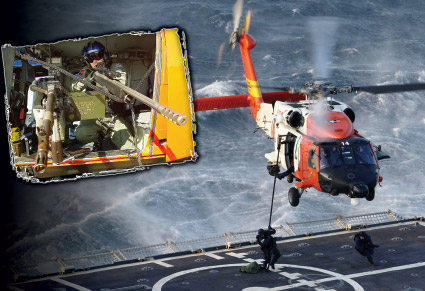 Although it is by far the smallest U.S. military service, with only about a thousand more active duty personnel than the NYPD, the U.S. Coast Guard (USCG) traces its origin to the U.S. Revenue Cutter Service, and is the nation’s oldest continuous seagoing force. From the start, Coast Guardsmen and their forebears have engaged, albeit on a smaller scale, in the same conflicts as other armed forces. Witness Signalman First Class Douglas Monro, awarded a posthumous Medal of Honor for leading a group of landing craft against withering Japanese machine- gun fire and successfully rescuing U.S. Marines trapped at Point Cruz, Guadalcanal, in World War II. 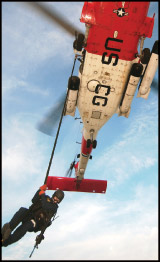 More Than Rescue
Today, most Americans think of the USCG as the nation’s premiere life-saving and emergency response asset, a reputation well earned since its formal establishment in 1915. But the USCG, a major element of the Department of Homeland Security since the massive post-9/11 reorganization of government agencies, is far more than a patrol and rescue service, and the force is adapting quickly to the needs of its expanded mission portfolio by arming some of its most visible platforms—helicopters.

In its Homeland Security role, the USCG is the federal government’s lead maritime agency, with responsibility for the safety and security of more than 12,000 miles of U.S. coastline in the Atlantic, Gulf, Pacific and Arctic Oceans. Other missions include maritime safety—search and rescue is the primary facet of this requirement; maritime mobility, including maintenance of aids to navigation offshore and in intra-coastal waterways and rivers; maritime security, which includes counter drug and interdiction operations as well as other law enforcement roles; protection of natural resources, including marine environmental pollution response; and of course, national defense.

For decades, USCG ships and patrol craft, ranging from deep-ocean, high endurance cutters to 25-foot Defender-class and Transportable Port Security boats, have carried armament. Large vessels typically include a Mk 75 3-inch (76-mm) automatic turreted gun system, capable of firing 80 3-inch rounds per minute from their .50-caliber tubes. Smaller weapons include the Mk 38 Bushmaster 25mm chain gun system, an automatic cannon with a 175 round-per-minute capability, and the ubiquitous M2 .50-caliber machine gun. Such weapons make even the smallest patrol boats nasty adversaries for anyone foolish enough to take them on.

Arming The Aircraft
USCG aircraft, however, traditionally have not carried weapons. The current inventory consists of fewer than 30 HC-130 Long Range Surveillance Aircraft—the familiar Lockheed Hercules that has been a mainstay of the U.S. military transport fleet, and more than 40 HU-25 Guardian Medium-Range Surveillance Aircraft, adapted from the popular FalconJet business airplane. Weapons are not part of either airplane’s mission requirements.

The Sting Ray, adapted from Agusta’s A109E Power commercial helicopter, incorporated weapons from the inception of its service in 2000. The USCG’s HITRON (Helicopter Interdiction Tactical Squadron), based at Cecil Field in Jacksonville, FL, flies eight leased Sting Rays and is the only unit of its kind in the nation authorized to employ AUF (Airborne Use of Force) in support of counter-drug missions, although several USCG aviation units based around the nation now have authorization to utilize AUF for other reasons.

Three New Helo Platforms
HITRON’s original mission was to intercept and stop, using gunfire if needed, high-speed drug boats, the “go-fasts” smuggling narcotics by the bale into the United States. Deployed from cutters, Sting Rays, cruising at 140 knots, literally can fly circles around the fastest cigarette boat. Forward-looking infrared (FLIR) and a NVG- (night vision goggle) compatible cockpit enable the MH-68A to fly with equal effectiveness day or night. When drug runners fail to heave to, HITRON gunners may fire warning shots with rifles or machine guns, and can if necessary disable a vessel’s engine with well-aimed rifle fire. HITRON interceptions have accounted for drug seizures valued in excess of $2 billion.

In 2003, HITRON expanded its mission to include countering potential terror threats to U.S. ports and waterways. The same weapons that can take out “go-fasts” will have similar impact on any likely terrorist vessel. HITRON air crews include two gunners who can fire M16 and M14 military rifles, an FN (Fabrique Nationale) M240H 7.62-mm belt-fed machine gun, or either the Robar RC50 laser-sighted or Barrett M107 .50-caliber precision rifle, or others. USCG relies on the latter big-bore weapons, used as long-range sniper rifles by other U.S. and many Allied armed forces, specifically to disable engines in recalcitrant “go-fasts,” leaving them dead in the water. Few marine engine blocks can withstand the impact from a .50-caliber full-metal-jacket round.

HITRON’s success and USCG’s increased security responsibilities led the service to replicate the MH-68’s capabilities in its other rotorcraft. According to LCDR Ward Sandlin, USCG Aviation Special Missions Program Manager and H-60J/T Platform Manager, “The Coast Guard determined that executing our responsibilities for Homeland Security required arming our other helo platforms.” Sandlin added that another compelling reason for arming the USCG rotorcraft fleet is expiration of the MH-68A lease in 2008. Rather than operate the tiny Sting Ray fleet and require the USCG to maintain and support three rotorcraft types, HITRON will migrate to the HH-65C Dolphin, the smaller of its two rescue helicopters.

The Agile And Able Dolphin
Although the Dolphin, in service since 1984 as the HH-65A, is nearly twice the empty weight of the Sting Ray—tipping the scales at just under 6,100 pounds instead of the MH-68A’s 3,503 pounds—the helicopter’s 120-knot cruise speed and 3.5-hour mission endurance is close enough to the Sting Ray’s performance in flight to handle interception missions with ease. The Dolphin’s larger cabin is also an advantage for air crew gunners. The Dolphin is seamlessly capable of meeting every other USCG mission requirement and can perform any other assignment with guns on board and mounted. Extensive testing has demonstrated machine-gun mounts do not impede operation of external helicopter hoists.

The third USCG helicopter, the Sikorsky HH-60J Jayhawk, is the largest Coast Guard rotorcraft, in active service since the early 1990s. The Jayhawk, adapted from the widely used Black Hawk utility helicopter, can handle a 6,000-pound load, cruise at 140 knots, and with a full load of fuel fly 300 miles offshore, loiter for up to 45 minutes on a rescue mission, and return to base with a fuel reserve.

Upgrades For The Jayhawks
HH-60Js also are undergoing upgrades to extend their service lives and improve per­­­­­­­formance for both Homeland Security and deep-water defense requirements. The Jayhawks will incorporate improved C4ISR (command, control, communications, computers, intelligence, surveillance and reconnaissance) systems as well as improved logistical support. Designated the MH-60T, the renewed rotorcraft will receive digital cockpits, new search-and-weather radar and electro-optical/infrared units, giving the helicopter capabilities superior to the Sting Ray. In addition, Jayhawks will include engine and structural upgrades as well as an Airborne Use-of-Force Package to provide increased protection against small arms fire from adversaries. Both Dolphins and Jayhawks are and will remain fully capable of sustained shipboard operations, flying from cutter flight decks.

The total current rotary wing fleet in­­­­­­­­­­­cludes 135 helicopters, 94 Dolphins and 41 Jayhawks, and LCDR Sandlin notes that eventually every platform will have the capability to carry both M240H machine guns and M14 ERBs (Enhanced Battle Rifles). HITRON will continue to use .50-caliber rifles as a disabling weapon. Completing the job will take some time. “Our biggest problem has been procuring the mounts and other hardware we use to arm-up a helo,” Sandlin noted. “The Global War on Terror, specifically Operations Iraqi Freedom and Enduring Freedom, mean that lead times for parts have significantly increased while availability has decreased.”

Full-Auto: Plain Talk From Above
The effect of machine-gun fire against any target is obvious. The EBR can fire in either full auto or semi-auto mode, but it is primarily for aimed fire. The rifle is a modified, shorter version of the classic M14 with a collapsible stock and Picatinny rails for easy installation of scopes, night sights or other accessories. A standard option is the EOTech Holosight, an electro-optical device that facilitates aiming at both close and distant targets. Air crewmen secured in rotorcraft with gunner’s belts can fire the EBR from a variety of positions, but frequently cradle the weapon while sitting by an open cabin door. Both the M240H and the M14 are exceptionally accurate weapons. Both fire 7.62 x 51 mm NATO (.308 Win) ammo, known for flat trajectory and stopping power at major distances.

“We have no immediate plans to expand the available arsenal,” LCDR Sandlin said. “We believe the M240H and the EBR adequately cover the spectrum of actions we’re likely to face and provide plenty of flexibility for our operations.”  In instances where force may be applied, LCDR Sandlin noted that personnel must follow the USCG Commandant’s Use of Force policy. “The policy states that the use of deadly force is authorized in defense of self or others to prevent their death or serious physical injury,” Sandlin said, adding that the rules would change somewhat in National Defense missions.

While the USCG has long maintained the Gunner’s Mate enlisted rating, comparable in all respects to the U.S. Navy, this specialty is in the deck and ordnance group, a surface category. The USCG’s aviation group includes, in addition to ASTs, two other specialty ratings, AMTs (Aviation Maintenance Technician) and AETs (Avionics Electrical Technician). The AG (Aviation Gunner) designation is one of several special skill areas open to qualified service personnel, almost all of whom are from the aviation group. “We have found that people already familiar with our rotorcraft generally are more comfortable in this role than those with surface experience,” LCDR Sandlin explained.

All Coast Guard AGs are enlisted service members. Since nearly all aviation officers are pilots, they must concentrate on flying tasks other than weapon operation, although those flying AUF missions must complete a qualification syllabus, involving ground school, five flights, and a check ride, and also be qualified and current with sidearms. Almost all prospective gunners are volunteers, but they are subject to intense screening before they begin any training syllabus.

Aviation Gunner Instructors from the Aviation Special Missions Branch at the Aviation Training Center Mobile, AL, conduct initial qualification training for candidates. LCDR Sandlin explained that the syllabus consists of extensive classroom training, followed by ground qualification with the weapons. After passing the basics, AG candidates begin flight operations and learn to operate the M240H and M14 both day and night. Once they have mastered the mechanics of aerial gunnery, candidates learn what to do in a variety of simulated scenarios against surface vessels. “It’s extremely important that AG candidates demonstrate consistently good judgment in handling their weapons in ambiguous circumstances,” Sandlin added. Once training is completed, AG candidates validate their expertise for instructors and earn their certification with a comprehensive check ride.

To date, approximately 45 USCG mem­­­bers in addition to HITRON gunners have completed weapons training and are certified aviation gunners.

Lean and Mean
The USCG’s small size and immense geographical responsibilities translate into constant operational tradeoffs. The service continues to seek an appropriate balance of platforms, weapon systems, and capabilities to conduct its missions at a reasonable cost.

So far, the Coast Guard has not discussed any circumstances involving airborne use of force, but the service is fully prepared to meet its mission requirements and do so in full compliance with U.S. law and in the spirit of its motto: Semper Paratus—Always Ready. 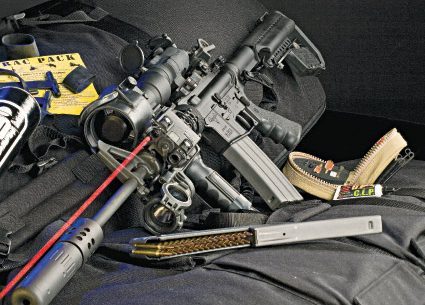 Although it is by far the smallest U.S. military service, with only about a…