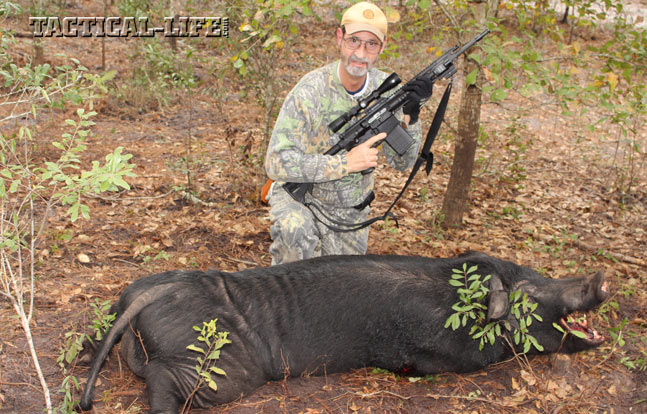 Ruger’s new SR-762 is just about ideal for hunting feral hogs. This soft-shooting and reliable, gas-piston-operated AR carbine is chambered in .308 Winchester/7.62mm NATO and has enough power and accuracy to drop a large hog out to 150 yards and a medium-sized one at 300 yards.

The SR-762 is the latest piston-driven, semi-auto AR from Ruger. Like all Ruger ARs, it’s a solidly built rifle designed for reliable functioning and long service life. The SR-762’s two-stage gas piston smoothly delivers energy to the bolt carrier, avoiding sudden peaks in stress that can promote premature wear. The gas system also has a four-position regulator that allows the user to adjust the cycling of the bolt and carrier to the ammunition being used, preventing excessive wear. The bolt and carrier are chrome-plated for long life and reliability. In addition, the rear of the bolt carrier is oversized to prevent excessive wear between the carrier and rear of the hardcoat anodized upper receiver. Last but not least, the fluted, cold-hammer-forged barrel is chrome-lined and made of high-quality 41V45 chrome-moly steel. This rifle is made to last, and it won’t let you down.

The SR-762 comes with three 20-round Magpul PMAGs, a flash suppressor, a comfortable Hogue grip, a six-position adjustable buttstock, high-quality flip-up iron sights and a full-length, six-sided handguard that has removable plastic covers. Two 2-inch rail segments are also provided that can be added to the handguard for mounting lights, lasers and other accessories. The whole package comes in a handy soft carrying case and has an MSRP of $2,195, which is quite reasonable given this rifle’s many features. 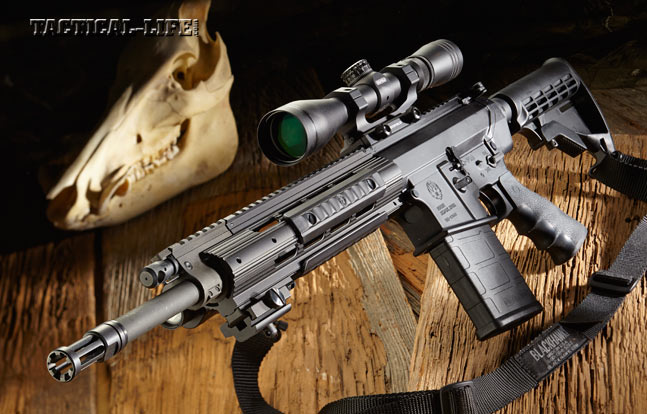 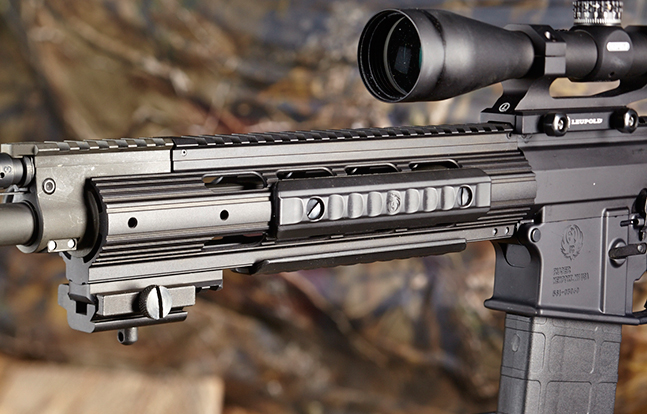 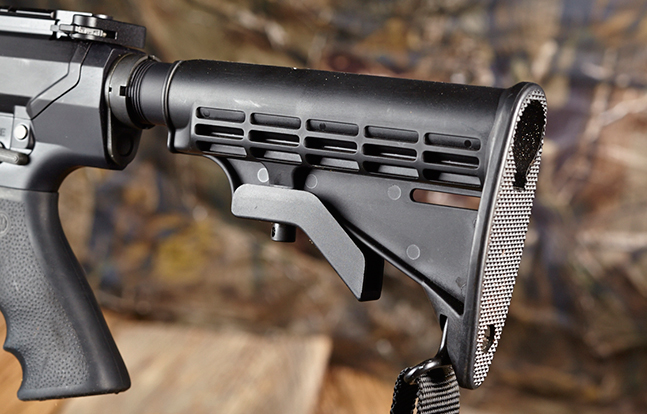 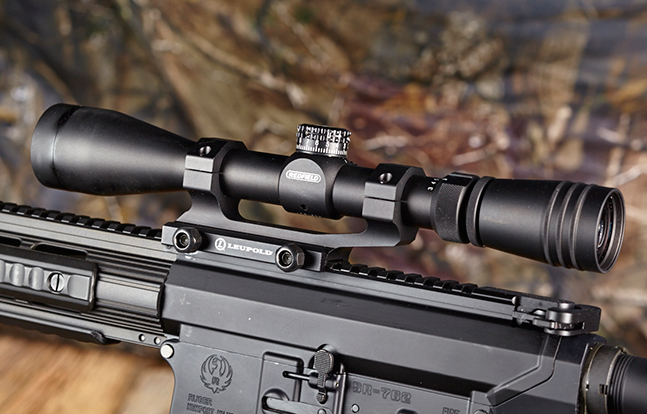 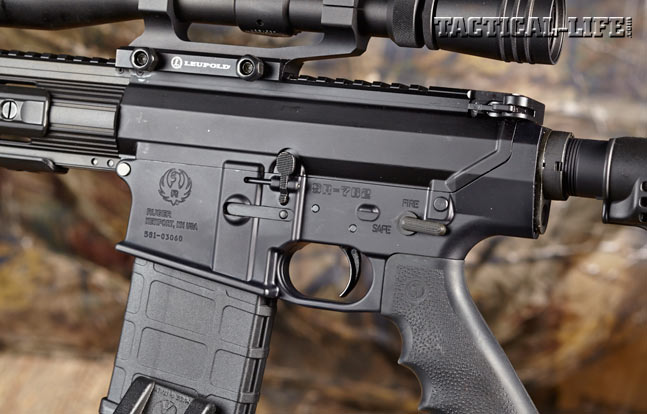 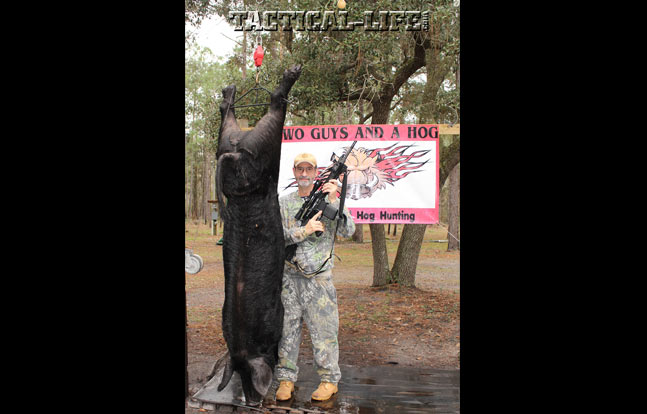 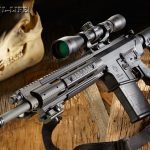 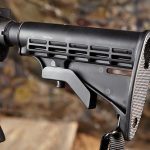 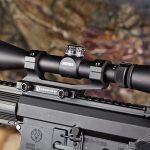 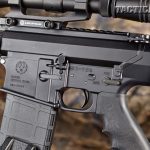 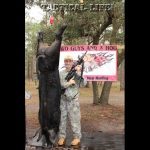 The SR-762’s quality and attention to detail were evident when I checked it out at the Florida Gun Exchange prior to taking it home. All of its parts were well formed, and the manganese-phosphate finish on the steel parts and the hardcoat anodizing on the aluminum components were an evenly applied matte black. The adjustable stock had minimal play when locked in each of the six length-of-pull positions. The SR-762’s action cycled smoothly and locked open when an empty magazine was in place. The Magpul magazines locked in place snugly and ejected smartly. The fire selector moved smoothly, requiring just enough pressure for it to reliably stay in the “safe” or “fire” modes.

I next field-stripped the rifle on a workbench. Internally, the fit and finish were excellent. There were no tool marks or rough surfaces anywhere inside the rifle. The trigger pull was very even and consistent at 9 pounds. Take-up and overtravel were minimal, which helped assure good trigger control. The SR-762 is an extremely solid rifle, just what one would expect from Ruger.

Choosing optics for a hog rifle depends upon the environment where you’re going to hunt. Here in Florida, the woods are thick and shots on hogs are usually taken at less than 100 yards. The Sunshine State’s forests can be surprisingly dark, so an optic’s ability to transmit light is much more important than its ability to magnify the target’s image. A 2-MOA red-dot sight works well here. If a scope is used, the lenses should be fully multicoated, and it should have an exit pupil of at least 8mm at all magnification settings that are used when hunting. The reticle must also be heavy enough to stand out boldly in low light.

I chose the Redfield 3-9x40mm Revolution/TAC scope for this hunt. It has Redfield’s Illuminator lens system with a vapor-deposited multicoating on all the lenses. The scope is nitrogen-filled to resist fogging. It’s also shockproof and has the Rapid Target Acquisition eyepiece, which eliminates having to look for the visual “sweet spot” when rapidly shouldering your rifle.

The TAC version of the Revolution has two additional features, the Tac-MOA reticle and tall, tactical-style turrets. The reticle has a triplex design that is heavy near the edges and tapers in two steps to a fine crosshair in the middle. The innermost segment of each crosshair features stadia lines that are 2 MOA apart. This makes it easy to estimate holdover and windage. The tall, tactical-style windage and elevation turrets have precise and repeatable 0.25-MOA adjustments. Setscrews in the turret caps allow the windage and elevation dials to be set to zero for any load.

I broke the SR-762 in and tested it for accuracy and velocity at the Flagler Gun and Archery Club and the Volusia County Gun and Hunt Club. Manufacturers generously provided four loads for testing, including the Black Hills Gold load with the 150-grain Hornady GMX bullet, Winchester’s 150-grain XP3, Federal’s 168-grain Gold Medal Match and CorBon’s 175-grain Match ammunition.

To test the SR-762’s accuracy, I fired three 5-shot groups with each of the four loads at 100 yards. I also fired one load out to 300 yards to test the holdover features of the reticle. The most accurate was Federal’s 168-grain Gold Medal Match ammo, which turned in a best group of 1.04 inches. As expected, the SR-762’s twist rate did a good job of stabilizing all bullet weights.

“If I had needed to stalk a wounded boar in heavy cover, the fast-handling SR-762, the firepower of its 20-round magazine and the extra energy of the Hornady Superformance ammo would have been very comforting.”

For shooting at 300 yards, I used CorBon’s 175-grain load. The target was a life-size steel head and torso silhouette. My Sierra ballistic program predicted a drop of 7.5 MOA, as the gun was zeroed for 150-grain loads at 100 yards. When I placed the Redfield scope’s 8-MOA stadia line on the target’s chest, I was rewarded with a loud clang after every shot.

The ultimate test of a hog rifle is in the field, so I took the SR-762 hunting at Two Guys and a Hog in Perry, Florida, which is owned by Ralph Correa. Two Guys offers preserve hunting on 40 acres and fair chase hunting on 1,000 acres. Ralph told me that there were some big hogs in the preserve, so I loaded the SR-762 with Hornady’s 150-grain GMX Superformance ammo and checked my zero at Two Guys’ range. The extra velocity of the Superformance ammo would get the most from the Ruger’s 16-inch barrel. I also equipped the rifle with a BlackHawk two-point sling and an Insight Technology XTI Procyon light. My sidearm was Ruger’s new GP100 Match Champion .357 Magnum revolver loaded with Black Hills’ deep-penetrating 158-grain XTP hollow points.

Shooting a big hog would give the rifle and ammo their most difficult test, so I chose to hunt from a blind that overlooked a shooting lane in the preserve where very large animals had been seen. The lane is about 70 yards long, so I set the Redfield scope at 4X magnification and waited. Setting the scope at low power was a good choice, because about 45 minutes later a huge black hog stopped in the foliage at the left edge of the shooting lane about 30 yards away. Given the downward angle of the shot, I placed the crosshairs 2 inches below the point of his right shoulder and pressed the trigger. The shot was well placed, but the boar spun 180 degrees and ran to the left.

The SR-762’s semi-auto action made it possible to place a quick second shot in the hog’s chest as ran it into the brush. This was one formidable animal! He absorbed over 4,000 foot-pounds of bullet energy and stayed on his feet. Finn Aagaard once wrote that heart-shot animals often run about 50 yards before collapsing, and that’s exactly what happened during this hunt.

Had my shots been poorly placed, he likely would have gone much farther, and I would have had to stalk him through some very dense cover. If I had needed to stalk a wounded boar in heavy cover, the fast-handling SR-762, the firepower of its 20-round magazine and the extra energy of the Hornady Superformance ammo would have been very comforting. When we weighed the huge boar, he tipped the scales at 427 pounds, and we estimated he was a bit over 6 feet long from the tip of his nose to the tip of his tail. After getting the boar back for mounting, I was able to measure his tusks, which were each 7 inches long.

As the boar was skinned and cleaned, it became possible to determine the exact damage done by the GMX bullets. The first 150-grain GMX expanded immediately and left a 2-inch entry wound in the right side of the chest when it hit and splintered the shoulder bones. Most standard lead-core bullets would have fragmented when they hit the gristle plate and shoulder joint. The GMX went right through and had enough energy left to penetrate the right lung, shred the aorta, pass through the left lung and still exit the body.

The second shot was a bit of a mystery. There was a single 1.5-inch hole in the left chest wall where the first shot exited, and we found a spent GMX bullet lodged in the right chest wall, but there was no entry wound. Apparently the second shot entered through the first shot’s exit hole! The liver was severely lacerated, but there were no signs of “crush” injury to the liver from a direct bullet hit. Evidently, the pressure waves generated by the Hornady GMX bullet as it expanded to 0.55 inches had created a pulsating temporary cavity large enough to cause several parallel fractures in the liver.

Ruger’s SR-762, Redfield’s Revolution/TAC scope and Hornady’s ammo proved to be a winning combo. With good shot placement, they were more than a match for a very large Florida wild boar.

Two Guys and a Hog 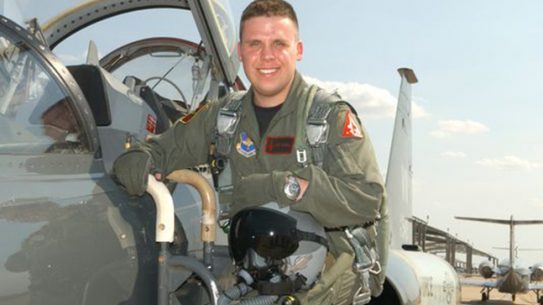 Air Force Capt. Mark Gongol jumped in to help after the captain of a...