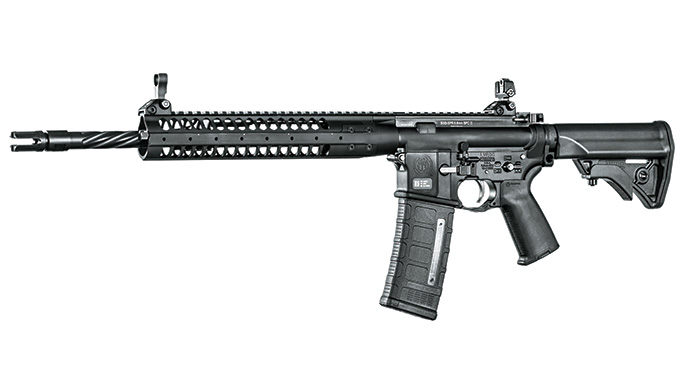 1 of 5
Six8: LWRC’s Special Purpose AR Rifle
Working with Magpul, LWRC designed its piston-driven Six8 platform, including the SPR variant shown, from the ground up to reliably feed the powerful, spec-ops-born 6.8 SPC. 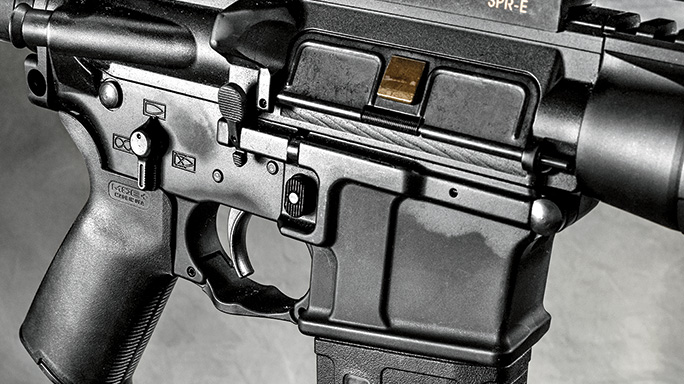 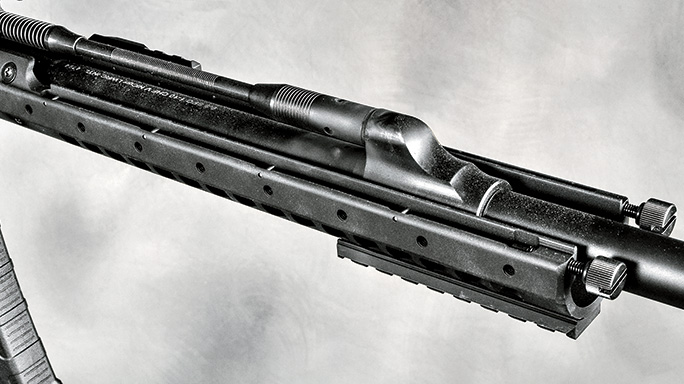 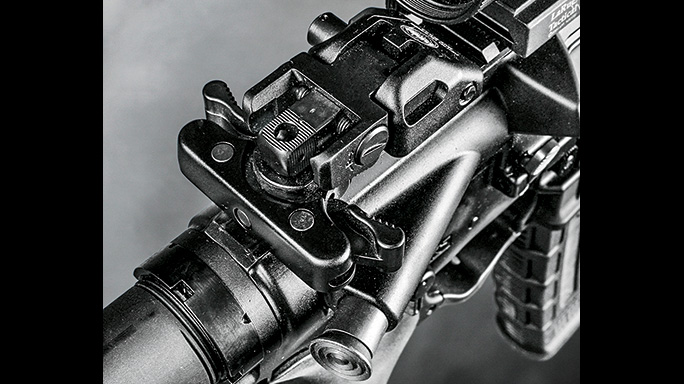 4 of 5
Six8: LWRC’s Special Purpose AR Rifle
LWRC equips the Six8 SPR with a heavy-duty charging handle as well as its Skirmish sights, including an adjustable rear sight that folds flat when not in use. 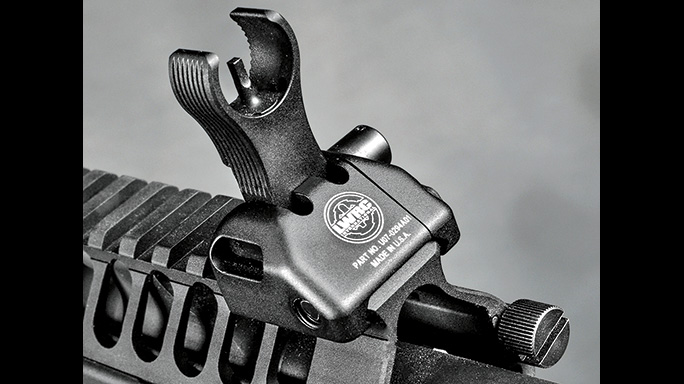 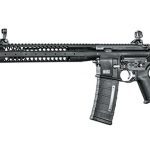 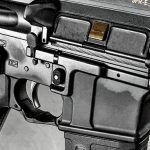 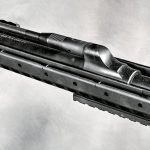 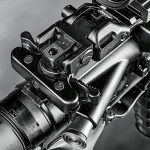 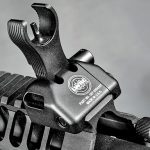 The debate over which AR operating system is better, piston versus direct impingement, is one that will never be truly won. What is irrefutable is that LWRC International is the industry leader in piston-driven carbines. LWRC rifles are authorized by a number of federal agencies. Most recently, the M6 Individual Carbine (IC), as part of the “1811 Package,” has become one of two carbines authorized by the Drug Enforcement Administration. LWRC was also one of the leading contenders in the now-canceled Individual Carbine solicitation for the U.S. Army.

Last year, I had an opportunity to visit LWRC’s facilities in Cambridge, Maryland. I came away from the visit impressed with the company’s production process and quality control measures. At the time of my visit, the plant was in the middle of producing several thousand Six8 PSDs for a foreign customer. The customer approached LWRC about providing a suitable replacement to the unit’s legacy personal-defense weapons. The potential quantity of the contract justified a substantial research and development effort by LWRC. One of the customer’s requirements was a more potent round than the 5.56mm NATO. This opened the door for developing a compact weapon system in 6.8 SPC.

The story of the Six8 project is one of initiative, innovation and partnerships that involved collaboration between LWRC, Magpul Industries and ATK. The 6.8 SPC cartridge has long been recognized for its improved terminal ballistics over the 5.56mm NATO round. One of the problems has always been stuffing the 6.8 SPC cartridge into a rifle designed for the 5.56mm. While the 5.56mm magazine will accommodate the 6.8 SPC round, it is a tight fit that can lead to reliability issues, especially in a full-auto carbine. The reliability issues are compounded by the feed angle of the 5.56mm receiver and the lack of quality magazines.

Given the potential of the contract, LWRC made the decision to reengineer the lower receiver to specifically accommodate the 6.8 SPC cartridge. The Six8 receiver features a magazine well that is both longer and wider than a standard M4’s. The new receiver changed the geometry to allow for improved feeding and reliability in all conditions. The Six8 receiver also features LWRC’s new IC architecture to include fully ambidextrous controls. As its name implies, the IC receiver was initially developed to meet the U.S. military’s Individual Carbine solicitation. The controls consist of a safety and bolt lock that are mirrored on both sides of the receiver. The ambidextrous magazine release features a wide paddle that is recessed to prevent inadvertent activation. LWRC also designed a beefy charging handle that is larger and fully ambidextrous.

The dimensions of the new receiver required a newly designed magazine. LWRC initially worked on developing a specific magazine for the new rifle. However, given the scope of the contract, the company wisely decided to partner with Magpul Industries. Magpul developed a PMAG that is specifically designed for the dimensions of the LWRC magazine well. The Six8 magazine is distinguishable from the 5.56mm PMAG both visually and by feel, and a newly designed follower enhances reliability. The most noticeable differences of the 6.8 SPC magazine are its red follower and the red tab on the baseplate.

Both the upper and lower receivers are forged and then struck twice, once before and once after being heat-treated. This processing is known in the industry as “coining,” and it allows LWRC to maintain extremely tight tolerances. The lower features a flared magazine well for faster reloads and a magazine stop to eliminate over-insertion. Like other LWRC rifles, the Six8 PSD features a patented, self-regulating, short-stroke piston system. The design eliminates the gas and carbon buildup in the receiver and bolt carrier group, and enhances reliability while reducing recoil and muzzle rise. Even with the piston system, LWRC rifles retain substantial parts commonality with traditional direct-impingement rifles.

The Monoforge upper receiver was first introduced in 2011. It’s a low-profile design that is void of the legacy “cheese grater” rails. Instead, threaded holes run the length of the 3, 6, and 9 o’clock axes, and users can install rail sections where needed. This allows the user to configure the rifle for specific needs without having the bulk and weight of excessive rails. The design also eliminated obnoxious threaded backplates required in some designs. All LWRC rifles come with two 3-inch rail sections for accessories and a shorter rail that accepts a quick-detach (QD) swivel for slings.

LWRC recently introduced a 16.1-inch-barreled version of the Six8 for the commercial market. The Six8 SPR has all the features of the PSD version with the exception of the select-fire function. The 16-inch, 1-in-10-inch-twist barrel is forged from a 41V45 steel alloy blank using high-pressure rotary hammers. This process results in near perfect rifling that is molecularly stronger than other forms of rifling. The barrels are also treated with NiCorr, which is “more lubricious, harder wearing, and more heat and corrosion resistant than normal hard chrome.” What all that means is that shooters can expect longer barrel life than that from standard mil-spec barrels. The one-piece bolt carrier is designed to operate with the short-stroke piston, and it’s also coated with a proprietary nickel coating to prevent corrosion and provide increased lubricity. The Six8 SPR uses an LWRC-made, high-efficiency four-prong flash suppressor that was designed for the PSD.

The Six8 SPR is equipped with LWRC’s excellent Skirmish iron sights. The rear sight is a square post with four different aperture diameters that can be selected by rotating the post. This design allows the user to fold the rear sight regardless of what aperture is selected. The front sight consists of a post that is adjustable for elevation and features a semi-circular guard that is reminiscent of the sights found on an MP5.

I recently received a Six8 SPR for evaluation. The rifle had a black finish and was equipped with a Magpul MIAD pistol grip and LWRC’s “SOPMOD”-type stock. The single-stage trigger broke cleanly at 7.81 pounds. While designed for law enforcement and military use, the Six8 is an ideal sporting rifle for those who want to take advantage of the 6.8 SPC in an AR platform.

I installed a Leupold 2.5-8x36mm Mark 4 M2 tactical scope with a LaRue SPR mount for the 100-yard accuracy testing. The TMR reticle and brilliant light-gathering capabilities make the Mark 4 series of scopes ideal for the sportsman. I have found this particular scope to be extremely versatile, and it has become my go-to glass for any AR evaluation. It has also proven to be very well suited for hunting.

We tested the Six8 with two Hornady loads and the Federal load developed for the Six8 PSD contract. The Hornady 110-grain V-MAX averaged 2,564 fps while the 120-grain SST averaged 2,479 fps. Federal partnered with LWRC to develop a 90-grain Bonded Soft Point. Testing showed the 90-grain to be ideal for defensive and protective detail missions. During our testing, the Federal load averaged 2,831 fps. We attached one of the rail sections at the 6 o’clock position and mounted an Atlas bipod for accuracy testing. At 100 yards, the Federal load produced a group that measured 0.55 inches. By comparison, the 110-grain V-MAX produced a 0.9-inch group, and the 120-grain SST group measured 1.14 inches. In our experience, the 1-in-10-inch-twist barrel clearly performed better with the lighter 90-grain load.

The rifle arrived just in time for whitetail season. I loaned the rifle to my son for opening weekend. Using the Federal 90-grain load, he harvested two cull does that both weighed about 125 pounds. The first was standing at an odd angle at just 100 yards, requiring a shot to the base of the skull. The doe dropped in her tracks without even a flinch! The second doe presented a broadside shot at 50 yards or so. The round entered high on the right shoulder at a downward angle and exited on the left side, just below the centerline. The 90-grain load produced massive damage and a significant exit signature. The doe ran less than 30 yards before collapsing. Any doubts about the effectiveness of the Federal 90-grain load have been put to rest. I look forward to tracking down some hogs with the Six8.

LWRC’s versatile Six8 SPR represents the latest in AR-platform design, engineering and features. It is equally at home in a patrol vehicle, an MRAP or a deer stand. Federal’s participation in the original Six8 PSD contract has also resulted in an increased availability of 6.8 SPC ammunition on the commercial market. 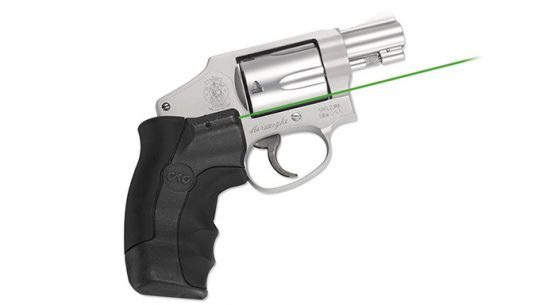 The all new LG-350 and LG-350G Lasergrips from Crimson Trace will be available in...