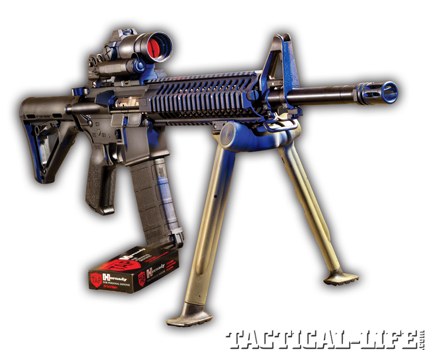 Featuring a self-regulating, short-stroke piston system of operation, the M6A1-S 5.56x45mm carbine is an LEO-specific tactical tool for the officer on the beat. It is shown equipped with an Aimpoint CompM4s and TangoDown bipod.

ARGUABLY, handguns are not very efficient fight-stoppers—but cops carry them because they are convenient. The gun is always there, yet it’s not too cumbersome when getting in and out of a car or subduing an unruly subject. When it’s time to go to guns though, most gun-savvy officers want a long gun simply because it carries a bigger punch and is more likely than a handgun to quickly incapacitate an offender who needs to be stopped. Recognizing this, more and more agencies are authorizing patrol officers to carry an AR-style carbine. One such suitable weapon is from LWRCI of Cambridge, Maryland. 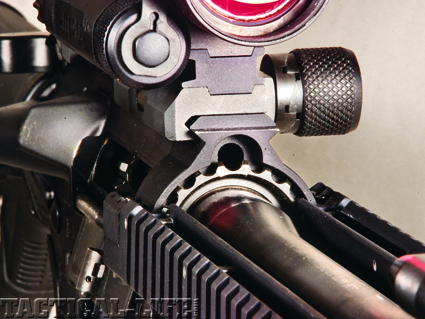 The piston rod extends through this hole into the receiver where it contacts the bolt carrier to cycle the gun.

LWRCI manufacturers several versions of the AR, but all are characterized by a piston-driven operating system instead of the direct gas impingement (DGI) system that has been the subject of much controversy since the AR-15 was first adopted as the M16 by the U.S. military in the mid-twentieth century. The DGI system bleeds propellant gas from a port in the barrel and channels it directly into the receiver and bolt carrier in order to cycle the gun. The gas is not only hot, which reduces component life, but is loaded with carbon and other substances which tend to foul the system and requires lots of lubrication to prevent stoppages. The gas piston system is an attempt to solve this problem by transferring the energy derived from expanding combustion gas through a mechanical linkage to the bolt carrier, so that gas never makes it to the receiver.

The bolt carrier assembly looks like that of a standard AR-15 except that it is finished in a proprietary nickel plating and has an integral thrust shoulder against which the piston rod pushes to drive the assembly to the rear.

Several manufacturers offer piston systems but LWRCI’s version, which was originally introduced in 2004 and has since undergone some improvements, uses a segmented piston rod that the company says is superior to one-piece designs. According to Darren Mellors, LWRCI’s Executive Vice President, it is very difficult to properly machine and heat-treat a long, thin piston rod that will last the service life of an AR without bending. LWRCI’s solution is a three-piece system that allows a little play and reduces the chance of parts bending, which can cause a stoppage. 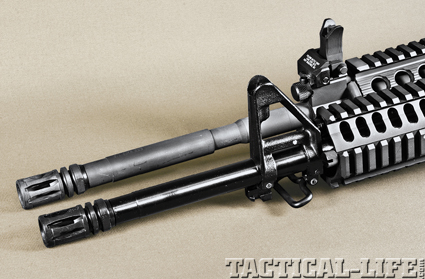 The LWRCI M6A1-S in front has a mid-length gas system with a gas port that is a bit farther forward than on a standard carbine. Also note the darker, shinier NiCorr finish compared to the mil-spec magnesium phosphate finish.

Gun Details
Designated by LWRCI as the M6 series, several versions of the gun are available in either 5.56mm NATO or 6.8mm SPC. For testing, an M6A1-S with a 16-inch barrel chambered in 5.56mm was received. The gun is a semi-automatic, although select fire versions are available for sale to government agencies. The S – for stretch – indicates the gun has a mid-length gas system that moves the gas port a little forward of the receiver compared to a standard carbine length gun. This reportedly results in milder recoil, which permits faster recovery and quicker follow-up shots. Inside the mil-spec 1.14-inch diameter buffer tube, the gun is equipped with the heavier H2 buffer, which tends to slow down the cyclic rate resulting in smoother operation and less stress on components.

As mentioned previously, the piston is actually three pieces—the piston cup fits over the gas plug that protrudes from the rear of the gas block, an intermediate rod mates with the piston cup and an operating rod impacts the thrust shoulder on the bolt carrier. The assembly moves only about 0.6 of an inch during the cycle – that’s less than the length of the cartridge – making it a short, not long, stroke system.

With each stroke of the piston, grooves around the circumference of the gas plug or nozzle scrape carbon off the interior of the cup in order to prevent build-up that could eventually cause the piston to seize. That carbon has to go somewhere, so it is expelled into the air and not into the receiver as it is with a DGI gun. Mellors reports that in tests, LWRCI has run guns their entire service life without any stoppages due to carbon build-up despite never cleaning or maintaining the piston.

LWRCI also uses an uncommon finish on its medium weight, hammer-forged 41V45 chrome-moly carbon vanadium barrels. NiCorr is a ferritic salt bath that nitro-carburizes the surface of the steel and hardens it to a depth of about .005 of an inch. It reportedly resists damage from salt spray better than phosphate or oxide finishes. NiCorr is also applied to the inside of the barrel and chamber because according to Mellors it does not flake or pit as hard chrome sometimes does. This makes for a very smooth bore.

In order to more effectively stabilize heavier bullets that retain more energy than light bullets at longer ranges, the barrel is rifled with a one-in-seven inch right-hand twist. A bayonet lug and sling swivel are located below the front sight. The Mil-Std-1913-railed forend, which is supplied with three 6.25-inch long slip-on rail covers, allows the barrel to float freely in order to enhance accuracy, and the mid-length gas system facilitates the use of a longer forend to provide more room for mounting various accessories.

The front post sight is mounted on a typical AR-15 A-frame and is adjustable for elevation. Contrary to what many people think, the sight becomes a blur in a magnified optic and does not interfere with target acquisition. It can also be co-witnessed with a non-magnified optic, which, as many experienced operators know, allows immediate transition to iron sights in the event that the optic is damaged or fails. A removable Daniel Defense A1.5 Fixed Rear Sight with an A2 aperture and an A1 windage adjustment drum is affixed to the M1913 rail atop the receiver.

The M6A1 controls are where they are on a standard AR, however the safety selector markings on the receiver are universal symbols for safe, semi-automatic and automatic. Of course the automatic position functions only on select-fire guns. The M6A1 does have a forward assist, but LWRCI’s manual wisely cautions to use it only under special circumstances, since it can cause a malfunction that is harder to clear than if the round that failed to fully chamber were simply ejected and a new round chambered. 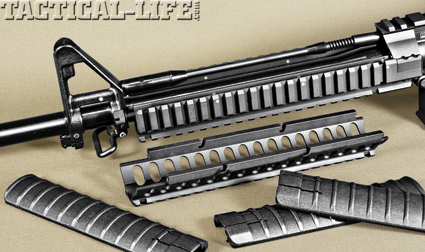 The three-piece piston system is accessible by loosening two screws at the front of the railed forend and then sliding the top rail forward and up. The M6A1-S is supplied with three slip-on rail protectors.

According to LWRCI, the bolt carrier, which is distinctly different than that of a DGI gun, is made of a very strong material borrowed from the racing industry and has a proprietary nickel-boron plating that is supposed to increase lubricity and resist corrosion. Although not needed to seal the bolt from gas blow-by like the bolt on a DGI gun, the bolt has three gas rings that are there to provide a snug fit inside the bolt carrier.

Instead of a bolt-on thrust shoulder to replace the DGI system gas key, the bolt carrier has an integral thrust shoulder. When the piston strikes this integral shoulder, the rear of the bolt carrier tends to tilt downward and damage the inside of the buffer tube. To prevent this, the rear of the carrier is enlarged to better fit inside the buffer tube and has skids to provide more bearing surface. The carrier is also faceted instead of round, which gives any debris that might find its way into the receiver a place to accumulate instead of causing the carrier to seize.

The single-stage, military-style trigger had very little creep or overtravel and broke cleanly at 8 pounds. The gun was equipped with a 30-round Magpul PMag, but also worked just fine with standard GI or the new TangoDown polymer ARC magazines. Instead of a stock A2-style pistol grip or collapsible buttstock, the M6A1-S came with a Magpul MOE pistol grip that has a storage compartment and a Magpul CTR six position collapsible buttstock with a rubber buttpad. The buttstock featured flush sling swivel mounting cups for quick detachable swivels, as well as a slot for attaching a sling. With the stock collapsed, the gun measured 32.5 inches long and with it extended was 35.75 inches in length. The gun weighed 7.5 pounds unloaded. 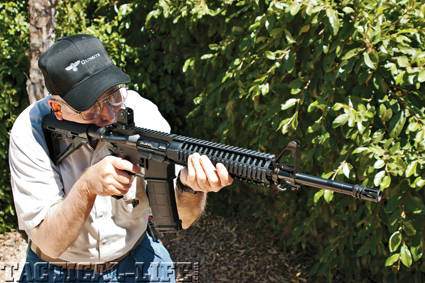 Range Time
To test for accuracy, I attached a Leupold Mark 4 1.5-5x 20mm MR/T scope in a LaRue Tactical QD M4 Scope mount and set up on sandbags on a sturdy bench. It was hot with winds gusting up to 15 miles per hour, but by carefully timing shots, 100 yard groups ranged from 0.54 of an inch to 3.92 inches with a variety of ammunition. After accuracy testing was completed, I moved to the indoor range for tactical drills. The gun handled just like any other quality AR-15 and put rounds where intended as long as the operator did not fail. During all testing, there were no malfunctions of any kind attributed to the gun, and just one failure to chamber due to a Winchester round that came from the factory with a crumpled neck.

A cop cannot ignore gun maintenance, but it is simplified and doesn’t need to be as intense with a piston gun. The characteristics that reduce maintenance might also mean there is less chance that the gun will malfunction at a critical time. That alone makes this gun worth considering for patrol use.

Bill calls for all residents 21 and older in South Dakota to own firearm.

Featuring a self-regulating, short-stroke piston system of operation, the M6A1-S 5.56x45mm carbine is an…