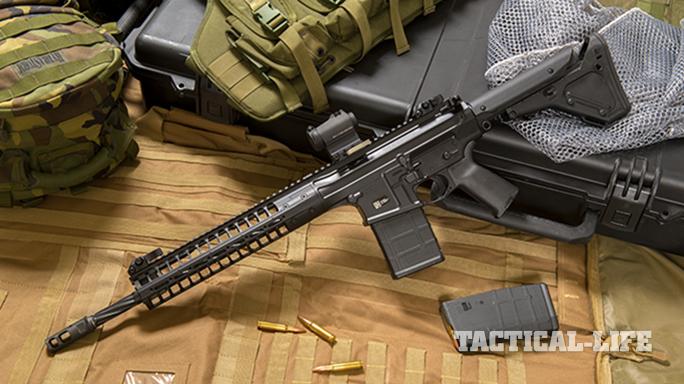 1 of 11
LWRCI REPR MKII
“I would say that LWRCI has another winner here.” 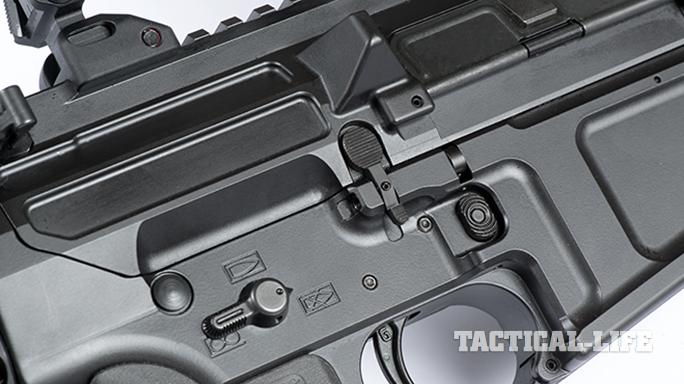 2 of 11
LWRCI REPR MKII
Along with the charging handle, the lower receiver’s magazine release, bolt catch and safety selector are fully ambidextrous. 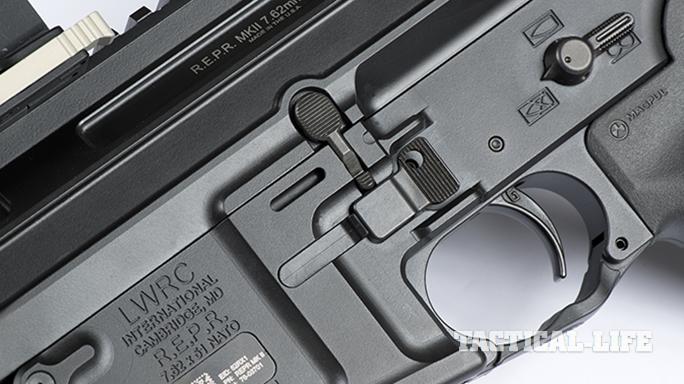 3 of 11
LWRCI REPR MKII 3
Along with the charging handle, the lower receiver’s magazine release, bolt catch and safety selector are fully ambidextrous. 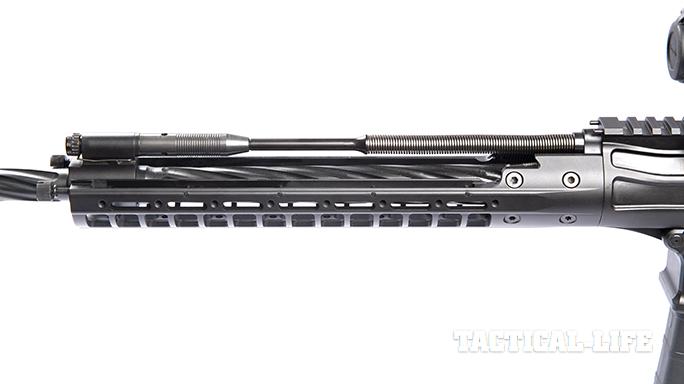 4 of 11
LWRCI REPR MKII
Shooters can easily remove the top portion of the handguard to access the piston. 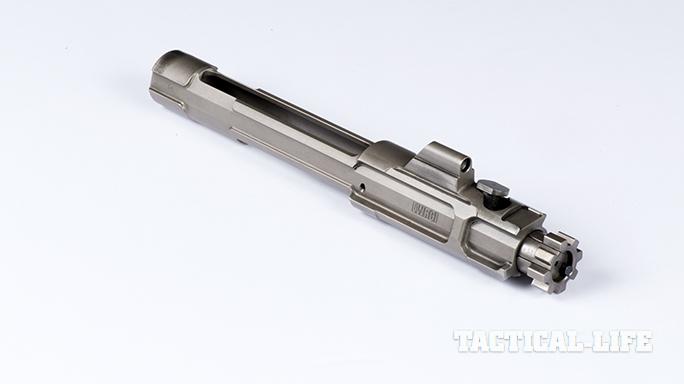 5 of 11
LWRCI REPR MKII
The bolt carrier group is plated with nickel-Teflon. 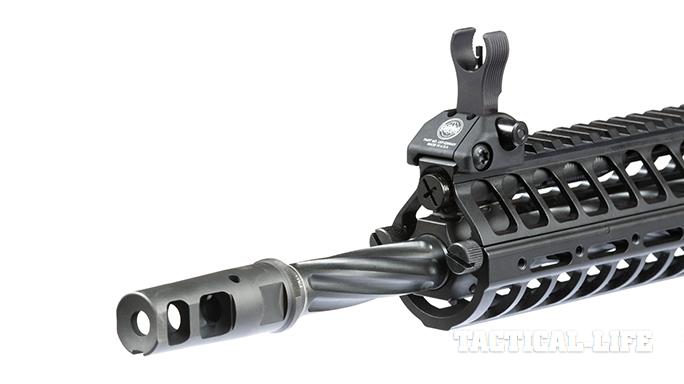 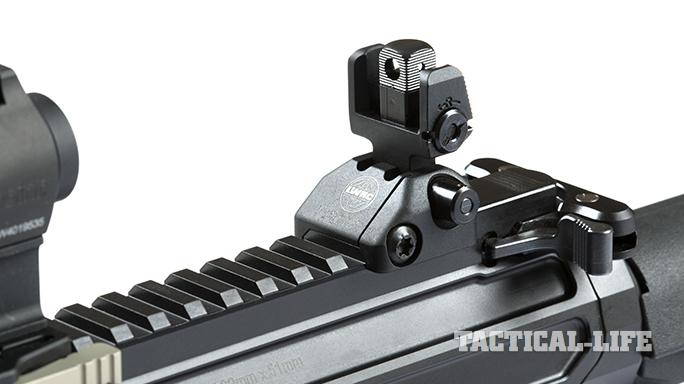 7 of 11
LWRCI REPR MKII
LWRCI includes a set of its Skirmish sights. 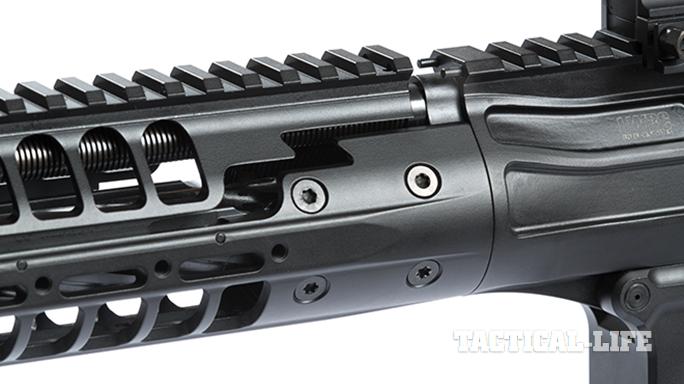 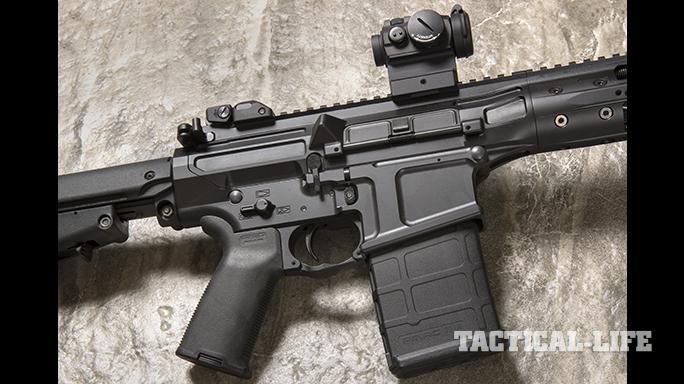 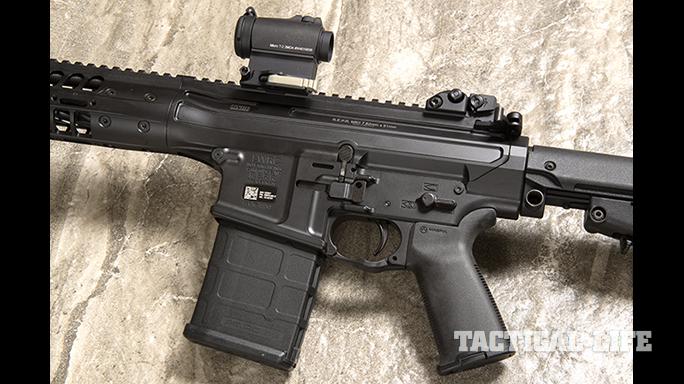 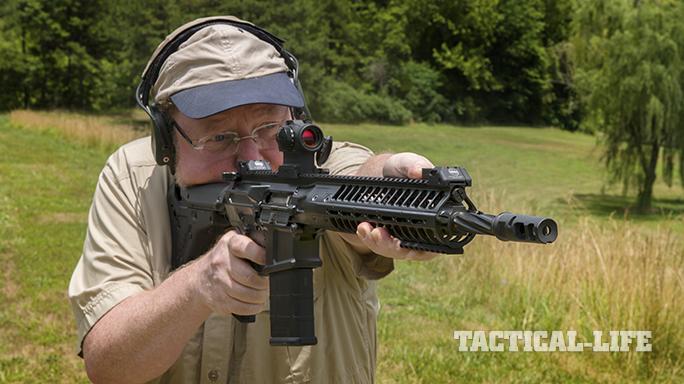 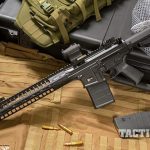 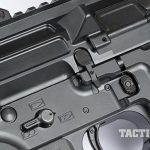 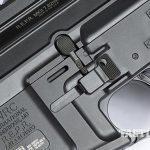 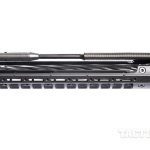 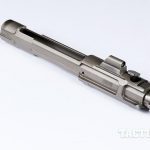 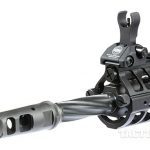 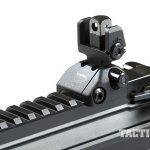 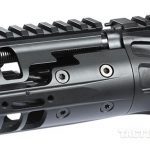 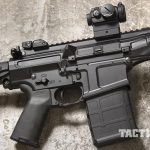 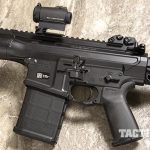 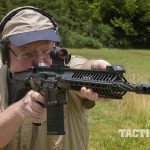 I have been following LWRCI since its early origins and have written several articles on its rifles along the way. LWRCI’s forte is piston-driven AR rifles. Back when the company started, there were no piston ARs available. They are quite popular today, however, and I give LWRCI a lot of credit for nearly single-handedly creating that market.

During one of my early factory visits, the company’s in-house designer showed off several CAD drawings and computer animations of a big-bore AR that was in the early drafting stages. That design turned out to be the SABR rifle, from which the Rapid Engagement Precision Rifle, or REPR, evolved.

The REPR was designed in response to the military’s Compact Semi-Automatic Sniper System (CSASS) competition, but unfortunately, LWRCI was not able to build it in time for submission. The REPR MKII version was just recently introduced, and it has several changes over the original REPR design.

The REPR MKII’s upper receiver has a rail base integrated into the receiver as a single unit. The original REPR had a rail base that was bolted onto the receiver. During high-speed video analysis, LWRCI found far less scope movement with the new integrated rail base compared to the bolt-on rail. The integrated rail stiffens the receiver and reduces scope movement, contributing to greater accuracy. The rail height was also increased by 0.03 inches to better accommodate barrel whip, and rail pins were added to the handguard’s upper segment to ensure a better return to zero.

The gas block was changed to increase adjustability. The original REPR had just four adjustments, but the REPR MKII has 20 adjustments. This offers the ability to more closely tune the gas volume to specific ammunition to reduce recoil.

The charging handle was reverted back to an AR style from the original REPR’s side-charging design as part of DEA and CSASS submissions. (A side charger is on the drawing board and will be introduced in the near future.)

The muzzle brake was changed to a more efficient design to further reduce felt recoil, and the stock was changed from a traditional collapsible stock to the Magpul UBR for added rigidity to increase accuracy. A wedge was also added to the lower receiver to tighten the fit between the receivers.

Given the unique design of LWRCI’s components, all of the major parts are machined in-house, including the barrel. In-house manufacturing allows LWRCI to not just control supply, but the company can also regulate machining tolerances and tolerance stacking as well. This aids its ability to mate components perfectly.

Both of the REPR’s receivers are made from 7075-T6 aluminum. The upper receiver has a shell deflector but is void of a forward assist. The bolt carrier is made from 8620 steel alloy, and the bolt is made from 931 steel alloy. Both are nickel-Teflon plated to make cleaning a breeze and reduce the amount of lubrication needed. Bolt carrier groups in piston rifles don’t get very dirty, but what is there easily wipes away with a cloth. Once you have cleaned a nickel-Teflon-plated bolt carrier group, you won’t want an un-plated one ever again. LWRCI added an enlarged boss at the rear of the REPR’s carrier in order to reduce carrier tilt.

The charging handle features dual oversized latches. They are large enough to ease charging of the rifle, but not so big that they get caught on other gear. I have found charging some other big-bore AR rifles to be difficult due to high spring tension. Not so with the REPR—it is surprisingly easy to cycle.

The barrel is cold-hammer forged from 41V45 steel with six-groove, 1-in-10-inch-twist rifling. The barrel is NiCorr treated, which is LWRCI’s version of a salt-bath nitride or Melonite-like process. The barrel also has a heavy profile with deep spiral fluting. Beyond the benefit of its great looks, fluting increases the barrel’s surface area for faster cooling. Fluted barrels are also stronger than non-fluted barrels of the same weight.

The barrel on my test rifle came capped with SureFire’s MB762-211C muzzle brake/suppressor adapter, but later production rifles will switch off to LWRCI’s own Ultra muzzle brake.

The REPR’s Modular Rail System handguard features a full-length, numbered rail atop, with rail attachment points on the bottom and sides. The rifle ships with two 3-inch rail segments and one sling mount rail. Also made from 7075-T6 aluminum, the Modular Rail System is a two-piece design allowing for easy access of the piston system by lifting the top segment of the rail. The top segment is secured in place by interlocking itself to the lower section of the rail system with a dovetail-like design and two pins mating to the upper receiver. There are also two, captured bolts utilized at the muzzle end. Secured in place from all directions, the proprietary interlocking design ensures that the upper portion of the handguard will not move. Unscrewing the two bolts at the front allows the top portion of the rail to be removed. The lower half of the Modular Rail System is bolted to the upper receiver with 10 bolts. It is a very sturdy and durable design.

The REPR MKII is fitted with LWRCI’s Skirmish folding sights. The sights freely rotate upward and lock in place. A button press is required to fold them downward, protecting them from being inadvertently folded.

I am most impressed with the lower receiver’s controls. The magazine release, bolt catch and safety selector are fully ambidextrous. Integrated into the receiver perfectly, they’re easy to manipulate without sticking too far out. The right-side bolt catch is a mirror image of the left’s. The left-side magazine release offers a large paddle that makes for quick and easy manipulations.

The REPR MKII is SR-25 magazine compatible and comes with a Magpul PMAG Gen M3 magazine. The first few hundred of the original REPRs had some feeding issues as a result of LWRCI’s partnership with a metal magazine company that gave them incorrect dimensions. Design changes have since been made to correct the issue, the partnership with the magazine manufacture was dissolved and LWRCI switched to Magpul’s PMAG with great success.

The REPR also utilizes Magpul’s UBR stock and MOE+ grip. I like the UBR’s design because the cheekweld does not change as the stock length changes. It is also very study with very little wiggle. As for the grip, I have changed all my rifle’s grips to the MOE+ because the rubber overmolding and lack of finger groves offers a much better and more comfortable purchase compared to mil-spec pistol grips.

The Geissele SSA-E two-stage trigger is standard on the REPR. Its first stage is rated at 2.3 pounds, and the second stage is 1.2 pounds. I much prefer two-stage triggers for precision shooting. The light weight of the second stage helps mitigate movement of the rifle by the shooter. The less physical input required by the shooter, the easier it is to shoot the rifle accurately.

The REPR MKII is available with 12-, 16- and 20-inch barrels in black, Flat Dark Earth, olive drab, patriot brown and tungsten. My test rifle came in hardcoat anodized black, but the other color options are Cerakoted.

Removing the test rifle from its box, my first impression was unmistakably dominated by the finish. The hardcoat anodizing gives it a deep rich tone. It was as flawless as it was beautiful—far nicer than traditional anodizing. I examined the fit and found it equally well done. All of the mated curves and edges of the receivers matched perfectly. The action cycled smoothly, and the trigger was exactly how you would expect a Geissele to feel.

Without optics, the REPR weighs in at 9 pounds. This is less than many other AR-10-sized guns that I have shot. The lower weight not only reduces its carry heft, but it also makes it easier to hold on target and allows the shooter to swing between multiple targets faster. It doesn’t sound like much, but every saved ounce matters in the field.

I mounted an Aimpoint Micro T-2 for my handling and function tests. Aimpoint’s prime benefits are long battery life and a reputation for great durability. Given the REPR’s svelte design and relative light weight, I found that it didn’t handle much differently than its smaller 5.56mm brethren. The REPR MKII fed everything that I could find, including decades-old surplus 7.62mm rounds and various incarnations of modern FMJ and hollow-point ammunition.

I found that the large, left-side magazine release made accessing the base of the bolt catch to lock the action open a little difficult, but the right-side bolt catch was very easy to manipulate. Either way, locking the bolt is an administrative action typically not done under stress. I did not note any other drawbacks from the ambidextrous controls. It takes a bit of time to get used to the ambidextrous controls if you are new to them, but the more I used them, the more I liked them.

LWRCI states that the REPR MKII will shoot sub-MOA with premium ammunition, such as 168-grain Federal Gold Metal Match rounds, so I took that as a challenge and put it to the test. I changed optics from the Aimpoint to Nikon’s new 6-24x50mm Black X1000 scope. The glass is nice and sharp, and its strong feature list makes a great value.

Shooting at 100 yards from prone with a bipod and sandbag, I tested three types of ammunition from Federal, Noveske and Black Hills. The REPR MKII favored the Black Hills ammunition with a best group of 0.9 inches and a 1.25-inch average. To be fair to the rifle, conditions were hot and humid with lots of mirage. To say that I was not shooting my best would be an understatement. But I am confident that the REPR MKII is more accurate than I was able to shoot. In the end, the rifle was perfectly reliable, quite accurate and handled well. I would say that LWRCI has another winner here. 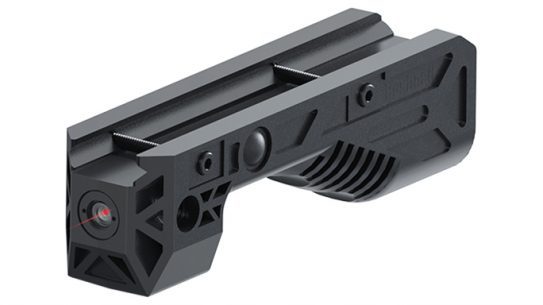