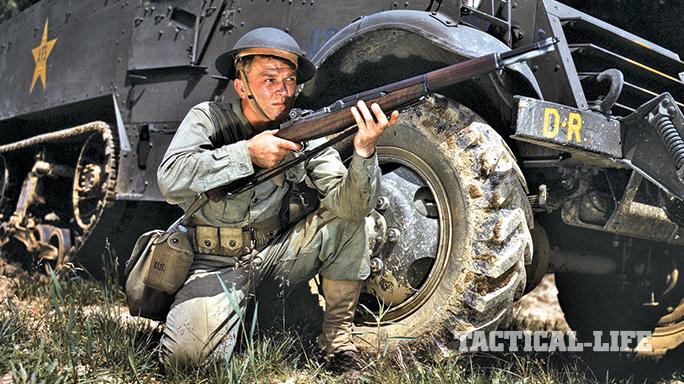 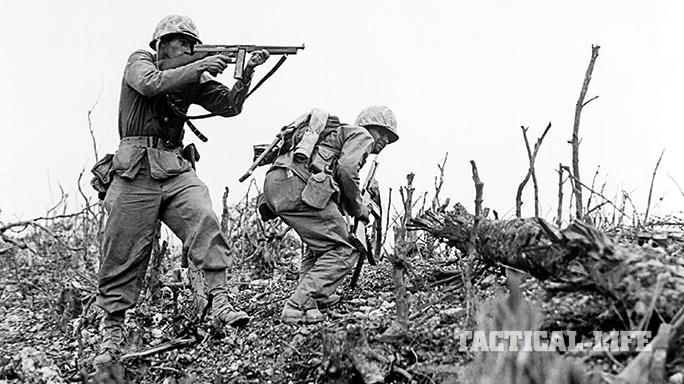 2 of 5
Combat Classics: M1 Weapons of WWII
Members of the USMC using the M1A1 Thompson in Okinawa. 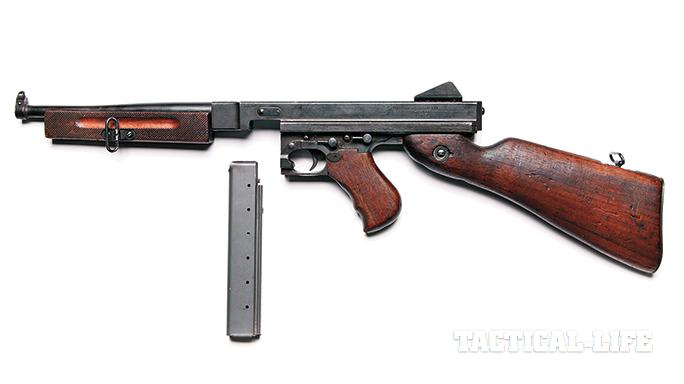 3 of 5
Combat Classics: M1 Weapons of WWII
Unlike previous Thompson submachine gun variants, the M1A1 version for U.S. troops would only accept 20- and 30-round “stick” magazines, not larger drum magazines. 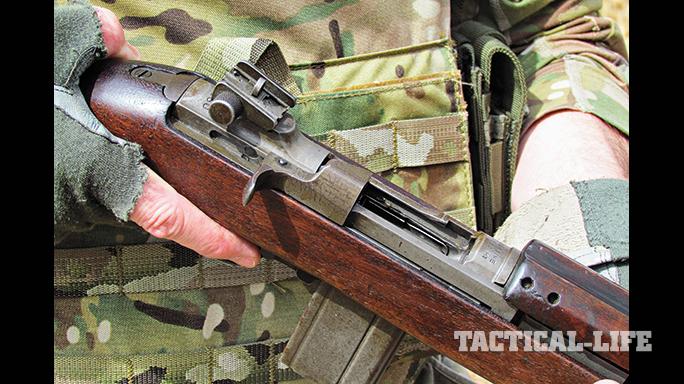 4 of 5
Combat Classics: M1 Weapons of WWII
The M1 Carbine provided a fast semi-auto action and fired the .30 Carbine round, a smaller cartridge made for close-quarters firefights. 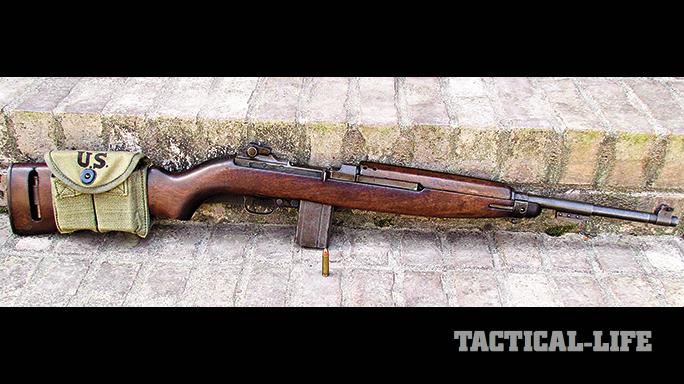 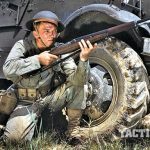 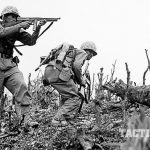 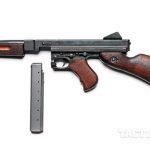 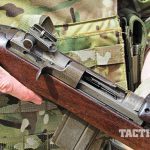 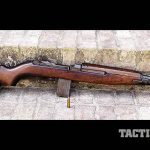 These days, gunfighting is both high art and big business. An entire lucrative industry owes its existence to the fact that tactical skill at arms is now a fairly regimented and scientific undertaking. However, contemporary military operations in urban terrain (MOUT) and close-quarters battle (CQB) operations are dwarfed by the global conflict that was World War II.

During the years spanning 1939 through 1945, the world saw its bloodiest and most expansive conflict. Citizen soldiers by the millions took up arms that represented the technological state of the art and proceeded to fight for the continued existence of their nations.

Logistical support in WWII was the stuff of nightmares. Down to the platoon level, U.S. infantry units would have potentially required ammunition in three different calibers and five different configurations. Three of the most common infantry small arms used by American forces in WWII carried the “M1” designation. Inspired by interviews with veterans who were there, this article endeavors to assess each of these weapons by contemporary tactical standards.

Canadian John Cantius Garand designed his eponymous M1 Garand in the early 1930s. Firing a full-power 7.62x63mm (.30-06) cartridge, the Garand was accepted for general issue by the U.S. Army in 1936. Its robust gas-operated action, mated with an en bloc eight-round, semi-automatic feed system, represented a quantum leap forward in infantry firepower. General George Patton famously opined that the Garand was “the greatest battle implement ever devised.” For all its indisputable attributes and near-religious acolytes, however, the Garand had a few shortcomings.

Like all battle rifles of the day, the Garand was long and heavy. While the semi-automatic, clip-fed action was lightyears ahead of the bolt-action rifles used by other combatants of the period, the rifle had to be dismounted from the shoulder to reload and the sling swivels are on the wrong side for tactical use.

Every veteran I have ever met who used the Garand in action loved it. The weight and bulk were more than offset by the rifle’s semi-automatic firepower and reliability in action. If the bolt fouled due to mud or debris, the operator could take a boot to the charging handle and have the weapon back in action. A friend dropped a German SS trooper with a single round at extreme range with his esteemed M1 Garand while liberating Orly Airport outside Paris. He loved the Garand, and given his pedigree, I trust this man’s opinion of the weapon.

General John Taliaferro Thompson developed the original submachine gun that eventually evolved into the M1A1 Thompson in 1919. The Thompson was intended to revolutionize the sort of trench warfare that characterized World War I by allowing a single soldier to sweep through enclosed spaces with a handheld automatic weapon. The gun was adopted by the U.S. military in 1928 and saw its combat debut in the Nicaraguan crisis wielded by U.S. Marines.

The United States was the third nation in the world to adopt a submachine gun, and the Thompson represented the apogee of old-school manufacturing techniques. While the wartime M1A1 version profiled here incorporated a simplified bolt with a fixed firing pin, a smooth barrel and Spartan furniture when compared to the refined civilian 1921 versions contracted out to Colt, the receiver was still cut from a solid piece of forged steel. As a result, it was quite heavy. Production of the Thompson ended in 1943.

The Thompson was really obsolete by the time WWII began, but it was available in some quantity, and that was its saving grace. The stopping power of the .45 ACP was indisputable, and Americans raised on the gangster mythos of the roaring 1920s loved the gun. Despite the prevalence of the Thompson in movies, I have a friend who fought as an infantryman through North Africa, Sicily and Italy and told me he never saw a Thompson in an infantry unit. The Thompson was common among tankers and airborne formations and was a popular prize whenever it could be obtained in the infantry. Audie Murphy, the most highly decorated American soldier in WWII, carried a Thompson.

David Marshall “Carbine” Williams designed the M1 Carbine while in prison for killing a deputy sheriff during a raid on his North Carolina moonshine still. The M1 Carbine was designed to equip noncommissioned officers, special troops such as truck drivers and artillerymen, and company-grade officers in combat. The M1 Carbine was the most prolifically produced small arm in the U.S. arsenal, with around 6 million copies rolling off the lines from at least nine different manufacturers.

The M1 Carbine fired a straight-walled, .30-caliber cartridge that seemed more appropriate for a pistol than a combat rifle. The rifle fed from a 15-round box magazine, though 30-round magazines were developed at the end of the war and saw widespread service in Korea. The carbine weighed about 6 pounds and was produced in both folding-stocked paratrooper versions as well as a selective-fire variant designated the M2.

The M1 Carbine was light, handy and popular. Unlike the other two M1s profiled here, the sling mounts to the side so that it can be used tactically, and the controls are handy and intuitive.

On the range, each of these three M1s has its own distinctive personality. The Garand hits hard as far out as I can reasonably shoot. The safety is mounted in the triggerguard and is fairly loud but unambiguous. The sights are designed for a rifleman and are readily adjustable for both windage and elevation in the rear via large thumbwheels. Recoil is manageable due to the mass of the weapon and, though the reloading drill is onerous, it is an intuitive process with practice.

The M1 Garand hangs naturally at the hip and, while hip shooting is a lost art these days, it was an integral part of tactical operations during WWII.

To call the Thompson submachine gun a boat anchor does disservice to boat anchors. Fully loaded, the gun is exceptionally heavy given its modest size. Additionally, the center of gravity is fairly far to the rear, and the gun requires attention and appropriate technique to control muzzle rise. Its controls are intuitive for right-handed operators, though the fire selector is too far forward for me to readily manipulate despite my long thumbs.

Interestingly, the Thompson sports an open-bolt action that holds open after the last round has been fired. The bolt locks back on an empty magazine so that the operator needs only to swap magazines and squeeze the trigger to be back in action. The M1A1 version will not accept a drum magazine and feeds from 20- and 30-round boxes that are fairly heavy when loaded in their own right.

The M1 Carbine is functionally recoilless and a joy to run. Mine is a wartime Rockola gun that has been utterly reliable despite its advanced age. I find the extensive fencing around the sights a bit distracting when shooting in a hurry, but the low sight axis makes for accurate fire at reasonable ranges. The M1 Carbine’s light weight and modest dimensions are indeed fairly intoxicating, so to speak.

Controls came in two flavors on wartime M1 Carbines, but its switches are readily accessible and intuitive. The bolt can be manually locked to the rear, but it does not lock open automatically on early empty magazines. As a result, the M1 Carbine’s bolt must be manually charged with each reload.

Things were not so standardized back in WWII, and feeding all these disparate weapon systems in combat must have been a wretched chore. I can only imagine the plight of the M1-Carbine-armed paratrooper nearly dry on ammo who desperately throws open a drop case only to find bandoleers of .30-06 ball ammunition. However, the upside is that each of these three M1s was very good at its assigned mission.

The Garand is the archetypal battle rifle that reaches out and touches targets at extreme ranges. The Thompson, with its cloud of heavy bullets, would sweep a room or trench better than most any weapon before or since. The M1 Carbine is an easy weapon to carry and maneuvers exceptionally well.

Eventually, weapons systems were consolidated for ease of logistics. Innovative materials science and manufacturing techniques relegated these three M1s to the history books. However, the American infantry formation in WWII was the most well-armed combat unit on the 1940s battlefield. The unique combination of U.S. manufacturing might and technical innovation saw to that. 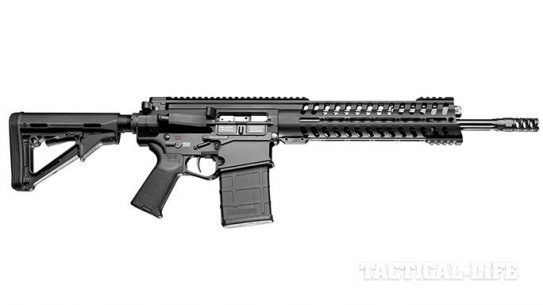