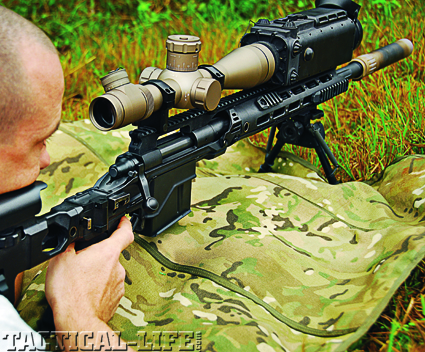 Including the suppressor, the M24-E stands tall at 52.5 inches. However, its folding stock capability allows troops to make the weapon system extremely portable over tough terrain.

The M24 first came into service in the late 1980’s after a quick selection process. The Army had recently decided to train snipers in large quantity and wanted to have enough of one type of rifle to issue it to all of the new snipers. The military soon decided it wanted to use a Remington Model 700 long action as the foundation of the rifle, so early prototypes featured a long action and were chambered in .30-06.

The idea to originally issue the rifle chambered in .30-06 came from the supply chain side of the military. The military had .30-06 match ammo on hand, so rifles would be chambered to fire that round. However, during testing, military officials realized there wasn’t enough ammo to support the tests, let alone issue for training, so they re-barreled all of the rifles in 7.62x51mm and the M24 as we know it was born.

The M24 has been on continuous active duty since the late 80s. The rifle features an internal magazine that holds 5 rounds, a long action married to a bedding block in the fiberglass stock and a 24-inch barrel. It is a simple and robust rifle.

Showing Its Age
While the M24 has served with distinction for over 20 years, as a platform it’s a bit dated. The current War on Terror has seen widespread use of our military’s snipers, and with this additional experience has come valuable lessons learned from the battlefield. A lesson we learned early in the war was that it’s in our best interest if we fight at night. We have the equipment to see and shoot accurately in the dark and the enemy doesn’t. So, if we shoot at him at night, he can’t shoot back…at least not accurately.

Here we see the first flaw of our honored M24. The rifle was never designed for use with night vision equipment or for use with infrared laser pointing devices, so any attempts to use these critical pieces of equipment will involve retrofit. When I was a kid, I used to “retrofit” my car with the latest performance enhancing parts. I achieved mixed, and sometimes catastrophic, results for my efforts. So it is with the M24 and retrofitting the performance enhancing optics and lasers. To fit these pieces to the M24 requires the use of the MARS rail, a cantilevered picatinny rail that is sandwiched between the scope and the receiver.

The MARS rail radically increases the bore height (distance between centerline axis of the bore and centerline axis of the scope) and causes pronounced neck fatigue for the sniper using the rifle. With the scope placed that high up off of the rifle, it’s almost impossible to rest your head on the comb of the stock, maintain a solid cheekweld (even with an aftermarket cheekrest) and still see down the scope.

The M24 also suffers from an internal magazine, making reloads a time consuming process. When feeding the rounds down into the internal magazine, it is not uncommon to accidentally jam one round into the receiver’s raceway (where the locking lug rides on the interior left side of the receiver). It takes time to jimmy the round loose before continuing to load. Even worse, this can occur at any time while top loading an M24.

Finally, the M24 is not currently set up to accept the use of a suppressor. Suppressors are gaining widespread acceptance among military brass as the tactical advantages of a suppressor become apparent. Suppressors contain the muzzle blast from a fired rifle, making a sniper’s signature almost non-existent. With no muzzle blast obstructing the scope when the sniper fires, it is also much easier for a sniper to spot his own trace. If a sniper can spot his own trace, he can make his own corrections for follow-up shots. This greatly reduces sniper-observer dialogue and makes for exponentially faster corrections and follow-up shots.

Time For Enhancements
Even with the flaws listed above, the M24 is a popular and effective rifle. However, imagine if we could take this long-serving and robust rifle and continue to capitalize on its strengths while correcting its weaknesses. 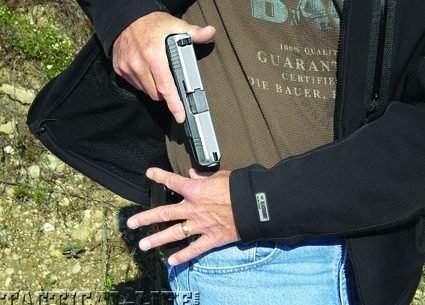 Including the suppressor, the M24-E stands tall at 52.5 inches. However, its folding stock…