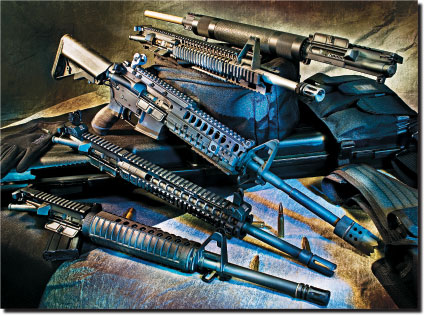 The move to equip patrol vehicles with AR-style rifles came in the wake of the 1997 North Hollywood shootout. With five illegally modified rifles, Larry Phillips and Emil Matasareanu faced off against Los Angeles police officers who were generally armed with 9x19mm or .38-caliber handguns. After 44 minutes of intense gunfire, both perpetrators were dead, but not until police could appropriate several semi-automatic rifles from a nearby firearms dealer. The incident sent a message across the country and many agencies began to take a proactive approach to arm their officers with M4s.

It’s been more than 10 years since the North Hollywood shootout and time has taken its toll on agency carbines. Arguably, the best feature of the AR is its modularity. Innovations during this wartime environment have produced “uppers” that exceed OEM standards and improve the M4-type design to meet specific mission requirements. With few exceptions, most of the carbines serving officers will accept new upper receivers featuring enhancements at a cost savings over the purchase of an entirely new rifle. 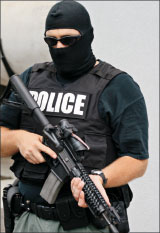 ADAMS ARMS- Kit replaces gas-impingement system
Adams Arms offers what they call the “AR15 Fix.” With a surging trend towards piston-driven carbines, Adams Arms has made an impact with their retro-fit piston drive-rod cycling system. It replaces the conventional impingement gas system blamed for critical failures in combat and adapts the AK-inspired piston concept known to run in the harshest environments. This product is one of the most cost-effective enhancements to any barrel length, and extends the life and improves the performance of an aging M4-style rifle. Price of the “fix”: $499.

NOVESKE- Best tactical upper money can buy
“If you’re going to pay a lot for a carbine, you expect attention to detail,” tells an N4 user. “The Noveske is that and then some.” One of the first shooting impressions was that the N4 didn’t get as hot as other uppers after reliably chewing through a 100-round C-MAG filled with Hornady TAP ammo. This observation was explained after learning that the Noveske N4 Light Recce’s 16-inch barrel is cold-hammer-forged from mil-spec M249 machine-gun barrel steel. This barrel has more mass than the typical M4 (necessary to sustain a high volume of fire) and is finished with a heavy amount of chrome lining, twice as thick as the current service rifle.

ARMALITE- Familiar utility at a fair price
Carrying the name of Eugene Stoner’s legacy is ArmaLite. Their products come in numerous variants including short-barrel carbines and examples that would win matches, but the complete M-15A4 upper assembly has earned the praise of our group for returning reliable function and familiar handling to a worn carbine without the added gadgetry. The ArmaLite upper assembly features a double-lapped, chrome-lined barrel ensuring lasting accuracy and consistent performance. TW’s LE evaluators described their department’s regulations and indicated the M-15A4 was the best choice for an upgrade while meeting agency requirements.

STAG ARMS– Left or right handed with a hard-hitting caliber
Since it appears that more and more left-handed people are speaking up and more operators are expressing dissent from the reign of the 5.56 NATO round, Stag Arms has applied their reputation to offer a configuration for both crowds. The new upper on the Model 7 provides a caliber change to 6.8 SPC and a left-handed option. Stag’s reputation for a reliable left-handed carbine has long been established, but the 20.77-inch stainless steel barrel makes the Model 7 appear more like a service rifle than a carbine. True, but the length takes advantage of the 6.8 SPC’s potential for close and longer-range activities. 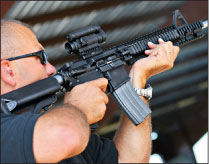 DANIEL DEFENSE- Highest-quality performance
Tactical Weapons evaluators shared the same regard for Daniel Defense as the U.S. Army who adopted the 12.0 Free-Float Rail System that’s been adopted for use in the Squad Designated Marksman rifle program. Daniel Defense’s SPR Mid Length is a complete upper receiver assembly that’s regarded as one of the highest quality products in the AR market. Each upper is hand assembled and tested to ensure quality and accuracy, the latter being verified with a number of 100-yard, 5-shot groups that measured near three-quarters of an inch. The drillings in the forend revealed the source for its reduced weight and superb handling when compared to other models. The circular drillings give strength to the forend while helping to dissipate heat from the barrel.

Some officers didn’t like the silver of the Daniel Defense upper, suggesting that it wasn’t “tactical.” In its defense, the stainless steel construction offers match-quality accuracy with less risk of corrosion and erosion to the bore, as seen with many hard-used chrome-lined examples. The Daniel Defense SBR mid-length assembly features the 12.0 FSPM free-float rail system with a distinctive cut in the front of the top rail that accommodates the front sight post and gas block of a mid-length AR gas system. Additional real estate for mounting target illuminators and target designators are provided along the side and bottom rails that extend along the A2-style front sight assembly. For more information, visit www.danieldefense.com. 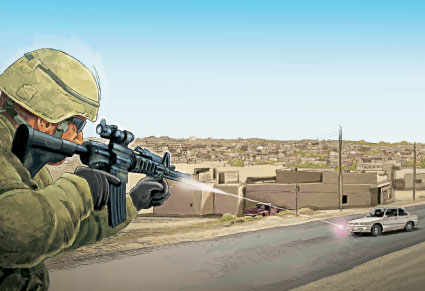