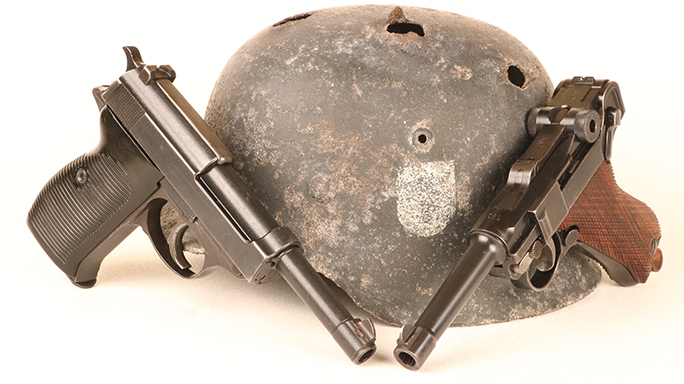 1 of 9
Photo by Will Dabbs, MD
Examining the Machine Guns, Handguns, and Rifles of Dunkirk
In 1940, the Nazis issued a mixed bag of P08 Luger (right) and P38 (left) handguns, as well as a variety of lesser models. 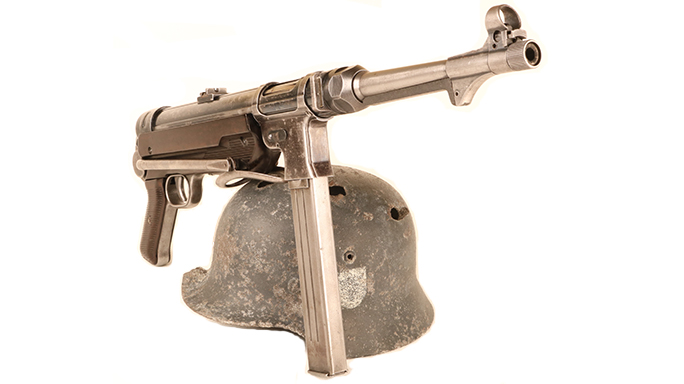 2 of 9
Photo by Will Dabbs, MD
Examining the Machine Guns, Handguns, and Rifles of Dunkirk
The German MP40 was the world’s first truly modern submachine gun. 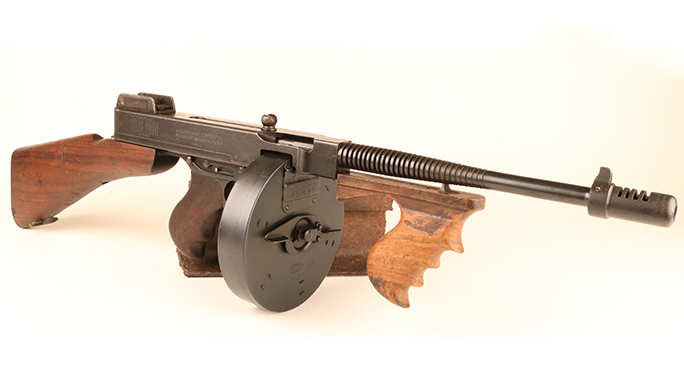 3 of 9
Photo by Will Dabbs, MD
Examining the Machine Guns, Handguns, and Rifles of Dunkirk
Early on and desperate for weapons the British purchased as many 1928 Thompsons as the Maguire Company could produce. 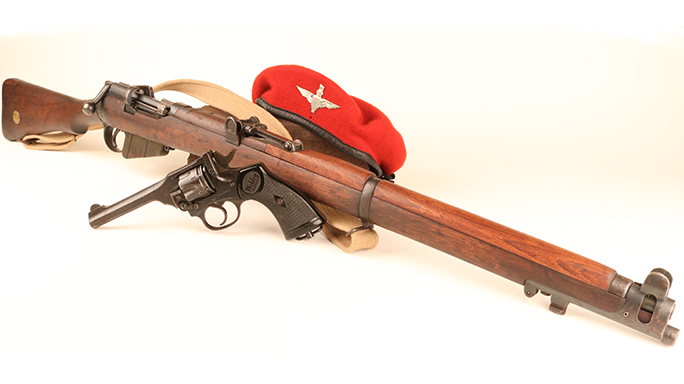 4 of 9
Photo by Will Dabbs, MD
Examining the Machine Guns, Handguns, and Rifles of Dunkirk
The Short-Magazine Lee-Enfield rifle paired with a Webley revolver. 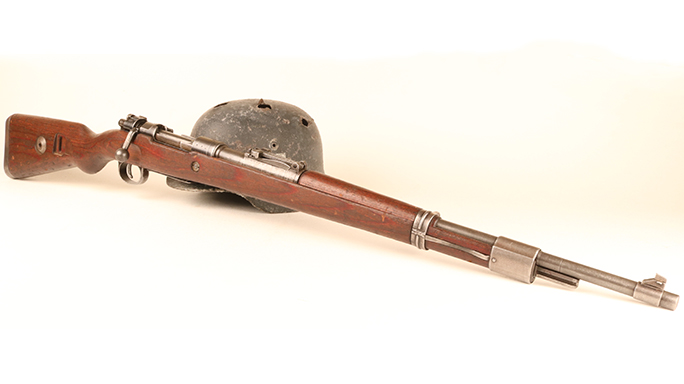 5 of 9
Photo by Will Dabbs, MD
Examining the Machine Guns, Handguns, and Rifles of Dunkirk
Adopted in 1935 and the last in a long line of Mauser bolt-action rifles, the Kar98k was relatively lightweight and portable compared to its forebears. 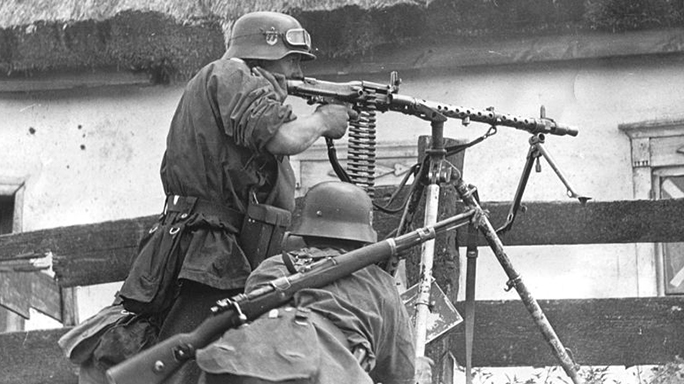 6 of 9
Examining the Machine Guns, Handguns, and Rifles of Dunkirk
As the world’s first GPMG (General Purpose Machine Gun), the MG34 (top) could be fired off of its integral bipod and used by infantry units on the assault or from fixed mounts for longer range engagements. One of the soldiers is also armed with a Kar98k (bottom). 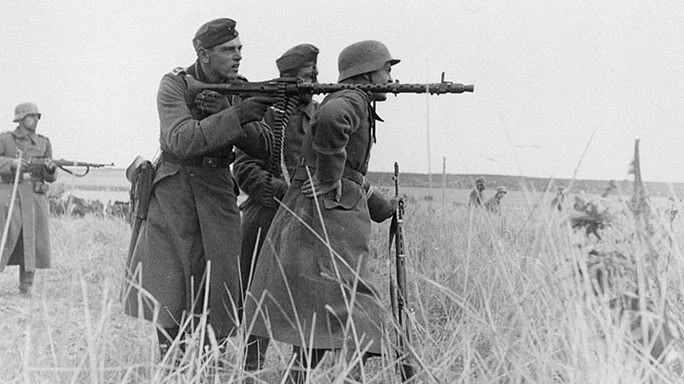 7 of 9
Photo by BreTho
Examining the Machine Guns, Handguns, and Rifles of Dunkirk
German machine gun squad on the Eastern Front with an MG34. 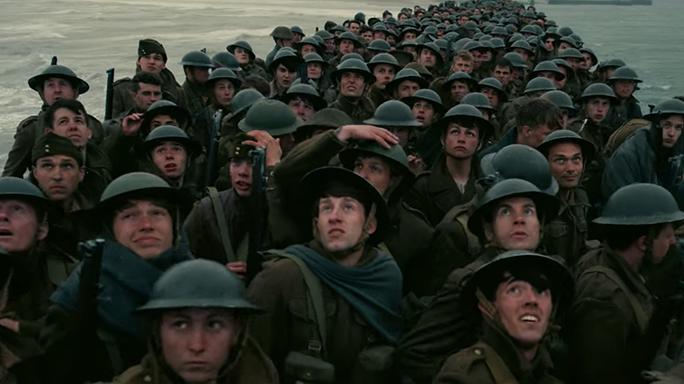 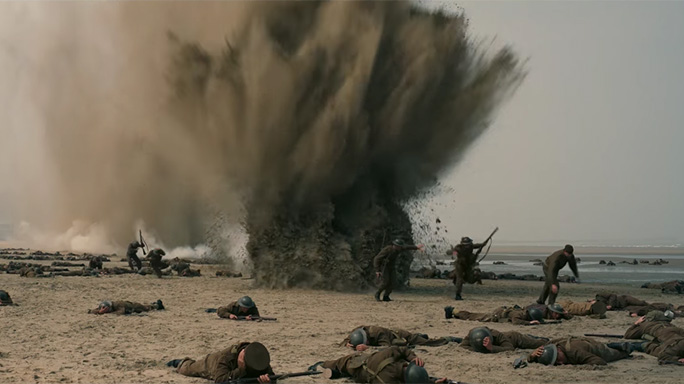 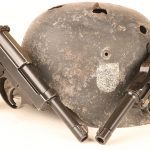 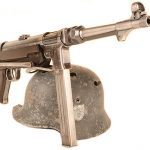 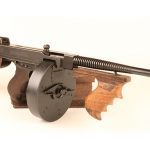 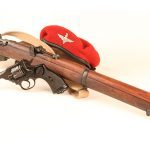 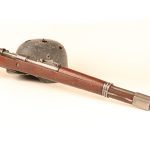 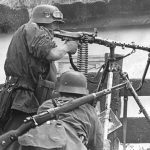 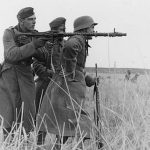 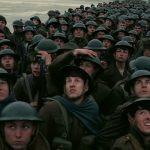 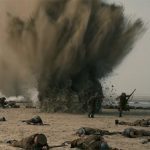 Over the course of 10 days in late May and early June of 1940, British military and civilian vessels evacuated 338,226 Allied troops from the beaches of Dunkirk in Western France. The Dunkirk operation has been described as the most effective military evacuation in human history.

Had the Dunkirk evacuation failed, the entirety of Europe might yet be paying taxes to Berlin, even today. More than any other singular moment in history, during this time the fate of Western civilization teetered precipitously. Success meant survival. Failure would have plunged the world into darkness.

Heinz Guderian’s Blitzkrieg or Lightning War was the precursor to the modern concept of combined arms warfare. This synergistic combination of tanks, infantry, artillery, and air power formed a coordinated mobile force that circumvented traditional battlefield obstacles to seize terrain by means of mobility, shock effect, and violence of action. As a result, the Germans overran most of Europe in just a few short weeks.

The infantry weapons each major combatant power used during this early phase of World War II reflected the relative importance that nation put on its military readiness. The British, thoroughly wearied after seeing hundreds of thousands of its troops ground up in the fetid trenches of World War I, were equipped primarily with the weapons they used during this earlier conflict. The Germans, by contrast, sent the Wehrmacht into battle with the finest infantry arms the state of the art could provide.

With the Christopher Nolan-directed film “Dunkirk” hitting theater screens this weekend, we’ve decided to examine the guns used in the evacuation.

When the British entered World War II, they did not have an indigenous submachine gun. The Sten was still in development during the Dunkirk evacuation. Early on and desperate for weapons the British purchased as many 1928 Thompsons as the Maguire Company could produce. Russell Maguire acquired the struggling Auto-Ordnance Corporation just in time to take advantage of World War II and got rich as a result.

While the Thompson was technically obsolete by 1940, it was the only proven submachine gun available in quantity. The Thompson, while powerful and effective, was heavy, expensive, and difficult to build en masse.

By contrast, the German MP40 was the world’s first truly modern submachine gun. Produced via industrial stamping and eschewing wooden stocks completely, the MP40 ushered in a new era of utilitarian industrial gunmaking.

The MP40 is front heavy but reliable and imminently controllable in action. Its folding steel stock renders the gun compact for transport. Generations of mass-produced Infantry weapons stemmed from the sorts of industrial processes initially perfected in the manufacturing of the MP40.

The British employed a variety of handguns produced both at home and abroad throughout World War II. However, at the time of the Dunkirk evacuation Webley and Enfield revolvers predominated. Though relatively antiquated, these robust wheelguns were optimized for combat. Their break action design made for relatively fast reloading, while their double-action triggers offered rapid target engagement.

In 1940, the Nazis issued a mixed bag of P08 Luger and P38 handguns, as well as a variety of lesser models. The P08 was an antiquated World War I-era pistol that was meticulously executed, yet overly susceptible to battlefield grime as a result. The P08 exhibited the rakish grip-to-frame angle ultimately made popular in the modern Glock handgun.

The P38 was a thoroughly advanced design that introduced the world to the single action/double action autoloading pistol. Reliable, safe, and effective, the only real shortcomings of the P38 were its eight-round single column magazine and its heel-mounted magazine release. The P38 was adequate to soldier on in Austrian service until replaced by the Glock in 1982.

The British entered the war armed predominantly with the Short-Magazine Lee-Enfield, also left over from the previous war. Feeding from a 10-round box magazine, the SMLE bolt-action rifle cocked on closing and subsequently offered an impressive rate of fire in trained hands. The rimmed .303 cartridge that the SMLE fired was dated yet offered long range and reliable function.

The German Karabiner 98k was itself an evolutionary development of the earlier Gewehr 98. Its 7.92x57mm rimless round was a generation advanced from the British .303 and offered comparable range. Adopted in 1935 and the last in a long line of Mauser bolt-action rifles, the Kar98k was relatively lightweight and portable compared to its forebears. By the standards of the day it was a state-of-the-art bolt action infantry rifle.

The British Vickers belt-fed machine gun was based upon the same action that drove the MG08 Maxim gun the Germans used to such great effect in the trenches of World War I. Designed by American inventor Hiram Stevens Maxim, this basic action spilled blood by the vat on both sides of no-man’s land during the Great War.

The Vickers, a water-cooled design, offered unparalleled durability and massive volumes of sustainable fire at the expense of portability and excessive weight. The Vickers gun was fired from either a tripod or fixed mount.

The Lewis gun was designed by an American Army officer named Isaac Newton Lewis in 1911 and by 1940 was hopelessly obsolete. Fed from a top-mounted drum magazine carrying either 47 or 97 rounds and driven by an unusual clockwork spring, the Lewis gun is easily recognized by its large tubular barrel shroud. Though difficult to maintain in the filth of combat, the Lewis did offer a portability not previously available from heavier water-cooled belt-fed designs.

The BREN gun was arguably the finest light machine gun of the war. A license-produced copy of the Czech ZGB-33, the Bren chugged along at a sedate rate of fire of around 500 rpm. Firing from the open bolt and feeding from top-mounted 30-round box magazines, the BREN gave the dismounted infantry squad a portable base of automatic fire that could maneuver with dismounted ground forces.

Though heavy by today’s standards, the BREN was rugged and dependable. Individual British soldiers typically carried spare BREN magazines that could be consolidated with the BREN gunner as needed.

The German MG34 was a seminal firearm. As the world’s first GPMG (General Purpose Machine Gun), the MG34 could be fired off of its integral bipod and used by infantry units on the assault or from fixed mounts for longer range engagements. The MG34 also served as a standard vehicular-mounted machine gun, as well as an effective close range antiaircraft gun.

The MG34 was air cooled with a quick-change barrel that could be readily exchanged by the gunner. It fired from the open bolt via non-disintegrating linked belts of ammunition. Multiple belts could be hooked together as needed, though a small drum carried a standard 50-round belt on the gun when used in the dismounted role. The MG34 cycled quickly at around 900 rounds per minute, though that paled alongside the 1,200-rpm MG42 that eventually supplemented it.

The MG34 was a meticulously well-built weapon that was as a result expensive and a bit finicky in action. However, the MG34 was the first infantry machine gun to serve in multiple roles via a single versatile chassis. This same basic concept drives the GPMGs of every major military in the world today.

The British Expeditionary Force escaped the Dunkirk beaches largely intact but without most of their weapons. As a result, the British nation was desperate to re-equip its force quickly. This desperation led to the Sten submachine gun and simplified Lee-Enfield No. 4 Mk 1. The industrial might of the United States eventually intervened, tipping the scales with the Lend-Lease program. This massive undertaking put British troops into American Sherman tanks and jeeps for their push back across the channel into Europe and eventually to Germany itself.

RELATED STORY: 7 Guns Used in the Film ’13 Hours: The Secret Soldiers of Benghazi’

The Nazis, for all their moral depravity, produced both superb engineers and soldiers. The engineering advances spawned by the Germans during World War II brought us the assault rifle, the GPMG, the modern combat submarine, and the jet-powered fighter plane. Their small arms at the time of the Dunkirk evacuation were, for the most part, a generation ahead of those of the Allies.

Dunkirk saved the British Army. The subsequent deterrent effect of the intact British Army along with the RAF’s victory over the Luftwaffe during the Battle of Britain combined to cancel Operation Sea Lion, the planned German amphibious invasion of England. This hard-won victory preserved Great Britain as the Unsinkable Aircraft Carrier from which Allied forces staged to retake the European continent from the Nazis four years later.

For 10 days in 1940 the fate of the planet turned on the grit and fortitude of British soldiers, sailors, airmen, and civilians. Under conditions of unimaginable deprivation, these Englishmen faced the full fury of the Nazis, snatching the remnants of the Allied forces back from the brink of annihilation. In so doing, these brave men, often wielding weapons built a generation before, literally saved the world. 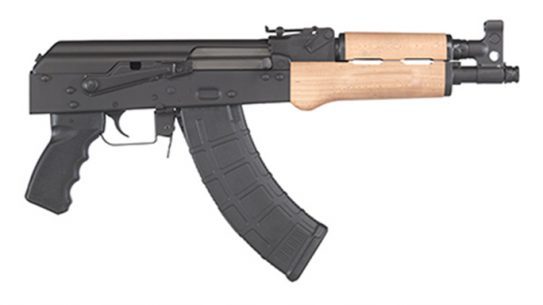 Century Arms is rolling out a 100 percent US-made version of its sought after...