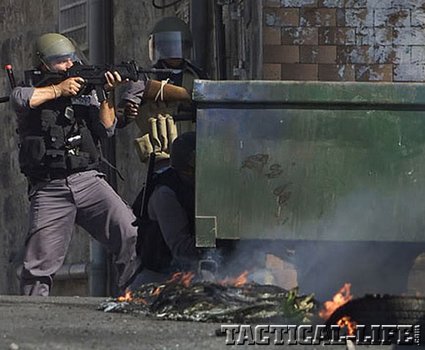 The Magal was a compact version of Israel’s Galil rifle family chambered to the WWII-era .30 M1 Carbine round, for along choice of Israel’s police forces

Israel’s family of Galil rifles is well known to the gun community and to the general public. Galil rifles have their origins in the late 1960s. After the Six-Day War in June, 1967 the Israeli Defense Forces (IDF) began developing a new assault rifle in 5.56x45mm. Compared to the 7.62x39mm Kalashnikov AK-47s (of Soviet origin) their opponents used, the IDF’s 7.52x51mm FN FALs left something to be desired. Some foreign weapons were submitted to the IDF for evaluation (the U.S. M16A1, the Stoner 63 series, and the German HK-33), as well as two local designs, one by Uziel Gal of Uzi SMG and the other by Israel Galili and Yaacov Lior. Galili and Lior had emerged as the winner and formed the company IMI (Israel Military Industries) now known as IWI (Israel Weapon Industries). Around 1973 IMI began producing Galil rifles.

Israeli rifles owe much of their design characteristics to the AK/AKM. Early prototypes were built using Finnish Valmet M62 (a Kalashnikov derivative) machinery, and receivers were made in Helsinki. But the 5.56x45mm round generated a higher pressure than the 7.62x39mm. This led to a change from the original pinned, riveted and stamped receiver to a heavier-milled forging. After several years the plan to arm the entire IDF with Galils did not happen as the U.S. was supplying Israel with huge quantities of M16s, CAR-15s and M4s at low prices.

Nevertheless, the Galil line has established itself as a reliable family of 5.56x45mm, 7.62x51mm and 7.62x39mm caliber firearms in a variety of configurations. Models now sold under the IWI name include the Galil AR, the Galil SAR, the Micro Galil, the Galil Sniper SA, and the Ace line of compact, enhanced human engineering and ergonomics carbines. Exports worldwide have been substantial, and there have been a number of foreign descendants such as the Croatian APS-95 and the South African Vektor R-4, R-5 and R-6. A licensee in Colombia, INDUMIL, has been manufacturing various Galil models for several years at the Fábrica General José María Córdoba in Soacha. In Myanmar (formerly Burma) state-owned company Myanmar Fritz Werner Industries Ltd. makes the EMERK-3 Rifle System, illegal Galil 5.56x45mm derivatives, under the reported supervision of Israeli technicians and with machinery shipped from Singapore. 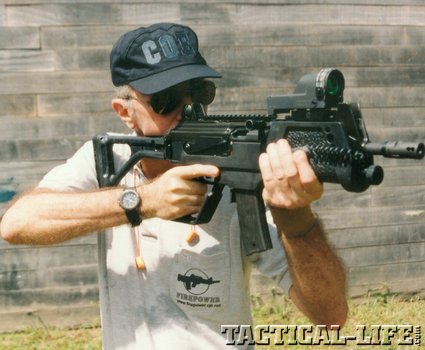 Very little is known about the Magal, a Galil cousin. Its story dates back to around 1998, and its design is credited to IMI Special Projects Manager Efraim Yaari. Yaari used IMI’s 5.56x45mm Micro Galil Assault Rifle (MAR) as a starting point and re-dimensioned it to fire the .30M1 Carbine 7.62x33mm cartridge. Israel had used this ammo since the World War II era, and Israeli police had long used the corresponding M1 Carbine since it minimized bullet over-penetration in urban areas, a problem with the 5.56x45mm rounds of the M16 rifles widely used in Israel’s internal security applications. The Magal was a supposedly less intimidating weapon (a frequently quoted requirement for the gun intended to replace Israel’s M16s). An initial production run of 4,000 Magals was anticipated, with a similar number to follow. An early batch of roughly 1,000 Magals was delivered and put into intense service in the Israeli-Palestinian conflicts from 1999 to 2000, but many negative field reports started coming back.

Most reported operating failures due to the Magal’s very short barrel, which produced insufficient gas pressure (this only worsened when riot control accessories were added), as well as barrel overheating during continuous fire. The weapons were sent back to the factory for improvements—
no additional orders were ever made. It is generally believed that those Magals have since been kept in Israeli Police Force depots for emergency use.

The Magal carbine did obtain at least one export order: in Brazil, the Polícia Militar do Pará (PMPA or Pará State Military Police) had evaluated the weapon and made an order in 2001. A reported 555 units were produced the following year. Shortly thereafter I had a chance to fly from Rio de Janeiro to Belém, Pará State’s capital city, for a brief hands-on encounter with the Israeli gun courtesy of longtime friend and then IMI Local Representative Rafael Vulej. Note that the Magal had previously been tested, approved and certificated (ReTEx No. 1711/00, November 8, 2000) by the Brazilian Army Marambaia Proving Grounds, prior to its adoption by the PMPA. 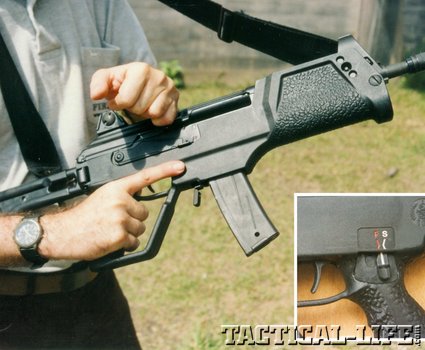 The cocking handle is on the right side. Note the AK-type selector lever in the “F” position, which blocks the bolt, the full-hand triggerguard, and the prominent magazine catch

Side-by-side with the original M1 Carbine, the Magal clearly appears six decades younger than the World War II workhorse. A compact gun with a 9.05-inch barrel length (five grooves, right-handed, 1:20 twist rate), it shrinks from 49.09 to 29.13 inches when folding the tubular stock. It has gas semi-automatic operation with a rotating bolt lock. The receiver is machined solid steel and each part of the firing mechanism (the pistol grip, full hand size trigger guard, magazine housing, handguard) is housed in a one-piece polymer lower. Fully disassembled the Magal has 72 parts. Field-stripping for routine maintenance and cleaning is achieved without tools in a matter of seconds, clearly showing the Magal’s distant Kalashnikov ancestry: just remove the magazine, ensure there’s no round in the chamber, press the cover-catch in, lift and pull out the receiver cover, pull out the return spring assembly, do the same with the bolt carrier group, remove the bolt from the bolt carrier and pull it backwards, and remove the gas cylinder. That’s it.

Handling and firing the Magal is straightforward. After inserting a 27- or 30-round magazine (the 27-round keeps the bolt open after the last shot), push down the AK-type lever on the right side to unlock the bolt, or flip the selector switch on the left side above the pistol grip from “S” to “F.” The cocking knob is 90 degrees to the right, and I use my left hand to actuate it without releasing the grip. With a full magazine and sling the carbine weighs 8.38 pounds, heavier than a similarly outfitted M1 Carbine’s 5.73 pounds.

The Magal has an L-shaped aperture rear sight (150- and 250-meter settings) and a post front piece, both with sturdy side protections and luminous tritium inserts to help in low-light situations. Picatinny rails can be added to the receiver cover and to the top of the handguard, enabling the attachment of a wide variety of gear. I tried the Meprolight MEPRO 21, a unit developed for the Israeli Special Forces, that provides illumination of the aiming point via a fiber-optic collector system during the day and a miniature self-powered tritium light source at night (no batteries needed)—I wouldn’t leave home without one. This sight can be used in tandem with other devices mounted on the rear rail, such as the ITL MINI-N/SEAS night-vision system or a magnifying scope. A tubular space inside the handguard is available for the insertion of a flashlight or laser designator.

Ten years ago shooting a few hundred rounds with the Magal at Instituto de Ensino de Segurança do Pará’s range in Belém was uneventful. At about 8.82 pounds loaded the carbine was no lightweight. Its heft made recoil mild. Offhand quick-reaction accuracy at urban-encounter ranges of 98 to 164 feet was solid: this average shooter saw all bullets consistently grouping center-of-mass on the paper target.

The rare Magal is still in use today. For more information, visit israel-weapon.com. 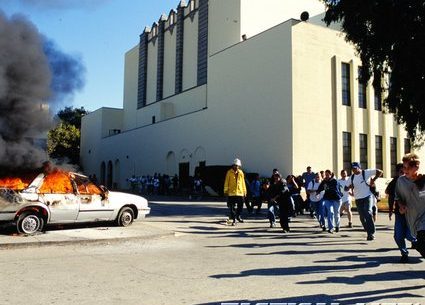