0
SHARES
0
VIEWS
Share on FacebookShare on Twitter
Benjamin’s Trail Nitro-Piston XL725 with its 3-9x40mm scope is an excellent example of the new breed of high-powered .25-caliber air rifles

One of the facts you quickly learn when you are new to hunting with air power is that most of the literature on the subject originates in England. Due to the UK’s highly restrictive firearms regulations, there’s an established cult using sophisticated air rifles for small-game hunting purposes. The catch is that they are also limited to 12 foot pounds of muzzle energy on their unlicensed rifles. Anything over that requires meeting the same strict legal requirements as a conventional firearm owner. For practical purposes, the English are forced to stay a bit under 12 pounds, as a rifle that delivers that muzzle energy with one pellet may creep over with another. Extreme accuracy becomes the name of the game, but in my experience, 11 pounds is cutting things very close on quarry like rabbits and squirrels.

One of the often-quoted bits of British wisdom is “.177 for feathers, .22 for fur.” A few hunters consider the .20 caliber an excellent compromise, but their advice on the larger .25 caliber rifles always seemed strange to me. Basically, they state .25’s lack penetration and are most useful for shooting things like rats and pigeons inside of buildings because the pellet will usually not exit the body. Eventually it dawned on me that this was because they are forced to keep the much heavier .25-caliber pellets at very low velocities to stay legal. Well, I have some good news folks; we don’t live in Great Britain! In fact, there has been something of a battle going on between American companies to supply more powerful air rifles. As a rule, you can expect something around 15 foot pounds of energy (fpe) from the better .177 calibers, 20 fpe from the .22’s, and 25 fpe from the .25 caliber (I might also add at this point that air rifle aficionados tend to designate their rifles by muzzle energy, a 15 pounder, a 20 pounder and so on). Better yet, in the last couple of years more and more companies have added “magnum powered” .25-caliber spring guns to their lines that leave those politically correct British rifles in the dust. 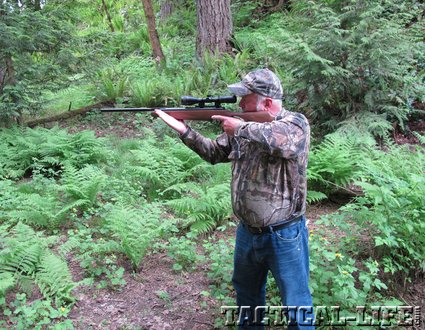 The first point to understand about any “magnum” air rifle is this is only in comparison to other spring-powered pellet guns. A basic high-velocity .22 rimfire short fires a 29-grain bullet at around 1,132 fps for 82 fpe. The less common .22 CB short is probably a better comparison, as it launches that same 29-grain slug at 727 fps for 33 fpe. Obviously, a magnum air rifle is not going to be an extreme long-range hunting weapon, but that is actually one of their primary advantages. Not everything, especially small game and common garden pests, needs to be taken at long range. A powerful air rifle provides an efficient way of handling many potential targets without the 2-mile extreme range of a conventional .22 long rifle. Backstop requirements for safe target shooting are also reduced.