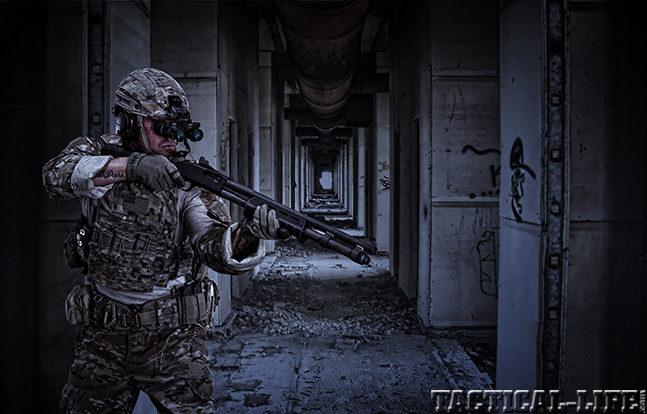 The Magpul Mossberg 590A1 shotgun
Comment(s)

Most, if not all, firearm platforms have become modular, meaning the user can modify the firearm—changing everything from calibers to accessory mounts—without many additional tools or certifications. The fact that the manufacturer created the opportunity for the end-user to complete what they have been doing from the beginning in a safe and practical way shows that the firearms industry as a whole is listening.

Mossberg & Sons, founded in 1919, is synonymous with the shotgun platform. There’s no question that Mossberg has truly set the standards for the industry. Mossberg shotguns are used by all types of industry groups in varying capacities. Competition, for example, helps you keep your skills sharp and raises your confidence and proficiency with the firearm. Some competitions stress real-world applications of the shotgun, which increases your personal-defense preparedness. Law enforcement personnel use shotguns in defense of life, which is similar in scope to the competitive and personal-defense arenas. The military’s use is inherently the opposite, although over the past decade the armed forces have become more of a “keep the peace” force in various combat zones across the globe.

Mossberg shotguns—especially the 590A1 Special Purpose—have proven reliable regardless of the environment. I personally have witnessed their use in a variety of situations while working in Baghdad, Iraq, during the 2003 invasion, and this is one of the most extreme environments. The Mossberg 590A1 performed well, with little or no issue. Overall, Mossberg firearms have confirmed their value in a variety of environments.

Competition has also played a large role in the evolution of the shotgun. Over the past eight to 10 years, 3-Gun-style competitions have grown tremendously popular. Many of these events can be found at local ranges across the nation and have become a larger part of the firearms industry. Many manufacturers target those who utilize their products in the competitive environment, which can be very different than the nature of personal defensive. Speed and consistency become a high priority, much of which is attributed to ergonomics, weight and recoil reduction.

“Mossberg shotguns — especially the 590A1 Special Purpose — have proven reliable regardless of the environment.”

This relationship between the customer and the manufacturer translates to other focused markets in the firearms industry. The items that have been introduced to assist competitors in increasing their speed or control have now crossed over into the personal-defense and tactical markets. The benefits attributed through the competition environment quantify the evolution of the shotgun, in that match requirements are constantly changing and competitors’ needs and expectations are continuously rising.

The military and law enforcement also play a large role in today’s shotgun technology development. Since the advent of the Global War on Terror over a decade ago, the firearms industry has been keeping pace with the requirements of military operations overseas. The shotgun has played a key role in this, as operations on urban terrain have shifted the role of the military in these combat zones. Door breaching with shotguns has become part of targeted operations. To what extent depends on the environment and situation, but regardless of this, the military still retains the capability to utilize the platform. Because of this, manufacturers have been scrambling to meet the requests and demands of frontline military units.

Law enforcement has always had access to the shotgun, and as a whole, benefits greatly from its technological advancements in recent years. While many LE departments have added semi-automatic rifles to their arsenals, they have not phased out the shotgun. This is one of the strengths of this platform: Even with the advent of additional tools to the LE officers’ inventory, the shotgun remains flexible enough to adjust to the changes in operating procedures.

its semi-auto rifle accessories, has led the industry in creative and functional products. Founded in 1999, Magpul has continued to innovate over the past 15 years, offering progressive accessories that engrained the company into the firearms community. Magpul began releasing shotgun accessories in 2012 that have become very popular in the industry.

Recently, Mossberg has partnered with Magpul to offer the 590A1 Magpul 12 gauge. The 590A1 has been typically Mossberg’s “tactical” offering, with both six- and nine-round capacities, adjustable buttstocks, railed forends, tactical light forends and Marinecote finishes as part of the different options, most of which are available to the end-user but not complete in directly factory sales. This partnership between the companies, blending their strengths to offer one complete package—one that doesn’t need to be modified by the end-user—is progressive in that it saves both time and money. This ends up being a big factor when purchasing any firearm—what further modifications are necessary? Realistically, with the 590A1 Magpul: none.

You should have a consistent, efficient and safe interaction with every firearm. How the firearm physically fits your body plays an extremely large role in achieving this goal of creating a path of least resistance for the muzzle while still retaining a consistent, efficient and safe posture. This relates directly to the orientation of the firearm on the body, which is attributed to the design of the stock, forearm and/or sling swivel. The sling is an additional item to the firearm itself, but it plays a huge role in the weapon’s use and can help users achieve greater control.

Utilizing the firearm’s center of gravity, a sling can increase the speed of presentation along with control, but only if the firearm is centered on the body. Many stock options either do not have a sling attachment point or the attachment point is on the bottom of the buttstock. This creates a pivot point that forces the user into more physical interaction with the firearm. This can create inconsistencies in presentation, as shooters will need to situate the buttstock in their shoulder pocket every time. Ideally, the buttstock’s positioning on the shoulder should help create a hinge point for a consistent, linear movement of the muzzle.

“The sling is an additional item to the firearm itself, but it plays a huge role in the weapon’s use and can help users achieve greater control.”

The Magpul SGA stock’s sling attachment point does sit towards the rear of the stock, assisting in the consistent placement on the user’s body, with the firearm sitting mostly flat against the against the body and the buttstock sitting near the shoulder area. The main difference between the Magpul SGA stock and an adjustable AR-style buttstock offered in the Mossberg 590A1 series is this rear sling attachment point. The adjustable buttstock allows for the hinge point of the rifle to consistently stay in the pocket of the shoulder. The SGA stock does not do that to an extent. The butt of the shotgun does sit near the shoulder, but there is still some space that requires movement.

The SGA stock offers a spacer option to adjust the length of pull to accommodate a variety of shooters physically. This, coupled with a rubber recoil pad on the end of the buttstock, makes the design fitting, albeit different than most AR-style stocks.

The simplicity in the ergonomics of the SGA stock brings merit to the design work behind it. There are many stocks options on the market today, but none that bridge the gap between having a fixed stock and a pistol grip like Magpul’s SGA stock does. Ambidextrous usage is important in all Magpul items, which is one of their strengths. This ensures that more users can utilize the same gear. Ergonomically, this is a very well designed stock.

The Magpul MOE forend is also very simple in design but accommodates a wide variety of accessories. With attachment points on the left, right and bottom of the shotgun forend, lighting systems and aiming devices can easily be added. A separate sling attachment point for the front of the shotgun is not completely necessary, but it is available as an option by Magpul.

ons of quality and durability. They also have reputations of usability and functionality. The Mossberg 590A1 Magpul shotgun continues along the path that both companies have forged in their individual product markets. Partnerships like this, where the manufacturers come together to directly integrate their prospective products, really do offer the best to the personal defense, competition and tactical customers. This keeps the evolution of the shotgun consistently moving forward and puts the best in the hands of the citizen, competitor, soldier and law enforcement officer. 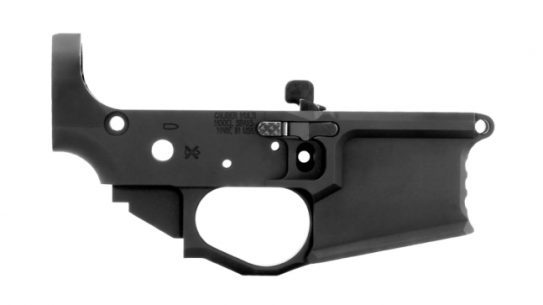