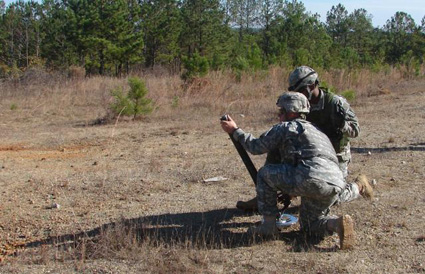 FORT BENINNG, Ga. — The Army wants to decrease the weight Soldiers carry on missions, and Fort Benning’s Maneuver Battle Lab is part of the effort.

Last week, 10 Soldiers evaluated a lightweight base plate being developed for the M224 Lightweight Company Mortar System during a series of live-fire, static and movement exercises at McKenna Urban Operations Complex, Fergusson and Buckner ranges.

The current M8 base plate limits the direction and distance a mortar can be fired, said Rusty Schulten, a project officer for MBL’s Soldier Team, and Soldiers still have to carry the M7 base plate – weighing more than 14 pounds – in order to fire in any direction and at maximum range.

“The new base plate will reduce the need to carry both during offensive operations when there may be a need to fire beyond hand-held range,” Schulten said. “(It) can support firing at maximum range, which could eliminate the need to carry the M7 base plate, significantly decreasing the weight of the Soldiers’ total equipment load.”

Factoring in the cannon and bipod, the current 60mm M224 mortar system weighs 46 pounds. The M8 X is 4.8 pounds, so the goal is to get the entire package down to about 33 pounds, said Alex Wright, mortar projects officer for the Soldier Requirements Division.

The Army is trying to reduce weight and improve performance on all mortar systems, said Chris Therkorn, who works at the program manager’s office for mortars in Picatinny Arsenal, N.J.

“It’s all about getting the best equipment for Soldiers and enhancing efficiency,” he said.

After using both the old and new base plates, the Soldiers, mortar instructors with 2nd Battalion, 29th Infantry Regiment, provided feedback to the Maneuver Battle Lab.

“It could be very, very successful,” said Sgt. Marvin Fowler. “They’re just giving us a template and asking, ‘What do you think? What can we modify?’ We’re the ones out there manipulating the mortar systems in Iraq and Afghanistan. We know what works and doesn’t work.”

“The technology is there where you can have something smaller that’s just as strong. The biggest thing is to make sure it sustains the cannon and gets the proper stabilization to support the mortar itself,” Fowler said. “The more stable the bipod, the more accurate we’re going to be on the battlefield.”

“If they can make it multipurpose and you just have to carry one, it would be a great advantage to the Lightweight Company Mortar System,” said Staff Sgt. Justin Jay. “The base plate overall has a lot of potential – once they work out some of the initial design flaws.”

Even if the M8 X is ultimately fielded, the Army will continue to use the M7 base plate for all sustained operations, Schulten said.

FORT BENINNG, Ga. -- The Army wants to decrease the weight Soldiers carry on…