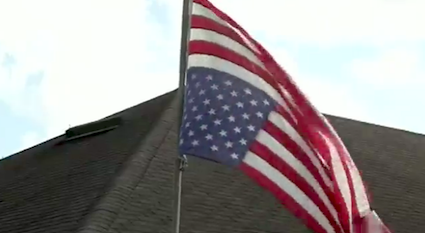 Jack Haggerty is a war veteran and says he is as American as anyone, but he thinks the nation is going in the wrong direction — that we’re upside down right now. Hence, his very public display.

But his display is getting a lot of heat and criticism by neighbors. Several neighbors said they were upset with the upside down flag, but only one resident would talk on camera.

“I don’t functionally see any difference between flying the flag upside down and hanging it,” said neighbor Ron Thompson.

Thompson said he has known Haggerty for years and he’s a good man, but this, he said, is a bad decision.

“I understand the sentiment behind it, but personally I don’t believe in using the flag as a tool for personal protest. He’s not in distress in the sense that he’s not calling for help. He doesn’t need police or the fire department,” said Thompson.

Read the rest of the story at news4jax (with video).

Jack Haggerty is a war veteran and says he is as American as anyone,…