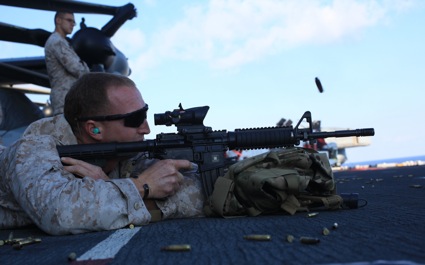 As the Army prepares for a two-year, $30 million competition to identify a possible new carbine, the Marine Corps is watching closely and evaluating what its own future weapons should look like.

“The thought process for us is very similar to what’s going on in the Army,” he said Feb. 1 at the Soldier Technology U.S. conference in Arlington, Va.

The Army released a draft request for proposals for its carbine competition Jan. 31. The desired weapon must “support future system enhancements for accuracy, lethality, reliability, signature suppression, ammunition improvements, maintenance and other weapon/accessory technologies,” the RFP said. No caliber restrictions were set in the document.