by John M. Halbrook
in Uncategorized
0

The beautifully manicured South Lawn slopes gently from the columned portico of the White House toward the Ellipse and the National Mall across Constitution Avenue. The tree-lined lawn is the site of formal head-of-state arrivals, the annual Easter Egg Roll and other ceremonies. But three removable, painted aluminum disks mark the lawn’s most frequent use as the landing point for “Marine One,” the President’s helicopter. Nearly every day, a glossy green and white Sikorsky VH-3D Sea King modified for VIP transport takes off and lands within yards of the Executive Mansion and the Oval Office in the West Wing. The President emerging from the helicopter’s forward hatch to the salute of a full-dress Marine is an iconic national image. 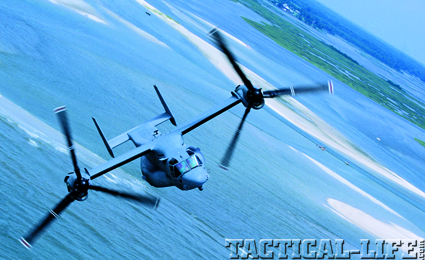 The tiltrotor Bell Boeing MV-22 looks to replace the Sikorsky VH-3 for Marine One.

White House flight operations are so smooth and flawless that few observers give them more than a passing thought, but efficient VIP transport is a major focus of one of the world’s busiest military aviation units—Marine Helicopter Squadron One (HMX-1). Squadron members call themselves the Nighthawks, but nearly everyone else refers to HMX-1 as “Marine One,” the designation assigned for any Marine rotorcraft when the President is on board.

Executive transport is a huge responsibility, but it is only one aspect of HMX-1’s duties that have been fulfilled for more than 60 years by generations of Marine aviators and enlisted personnel. The unit’s history is equally interesting and forms the core of Marine Corps rotary wing aviation.

Marine interest in helicopters dates back to the 1930s, with the creation of the Pitcairn Autogyro, and Igor Sikorsky’s helicopter designs in the 1940s. Immediately after World War II, Corps leaders realized helicopters could help overcome the impact of nuclear weapons on amphibious assault forces, the Marines’ stock in trade. Marine Experimental Helicopter Squadron One (The “X” stands for “Experimental” and remains in the designation although the squadron dropped that part of its name years ago), the Marines’ first helicopter squadron, was established to develop aerial assault techniques and tactics and evaluate helicopter missions. It set up operations on December 1, 1947, with just 10 members at Marine Corps Air Station (now Facility) Quantico, Virginia, where it still runs today.

HMX-1 assumed additional responsibilities for Operational Test and Evaluation (OT&E) for new helicopters and flight systems as rotary wing technologies improved. Over the years, HMX-1 has tested every helicopter the Marine Corps has considered and adopted. This unit ran initial flight tests for the Bell Boeing V-22 Osprey tiltrotor as this hybrid aircraft evolved and later entered active service. A new squadron, VMX-22, now conducts MV-22 OT&E, but VMX-1 paid a price for its early involvement with the program. Three of its assigned pilots and one crewman died in two fatal mishaps in 2000.

The mission for which HMX-1 is best known, transporting the President, began in 1957. An emergency interrupted President Dwight Eisenhower’s vacation in Newport, Rhode Island, and there was no quick alternative for a trip back to Washington, which normally involved a ferry ride across Narragansett Bay, a flight on Air Force One, and a drive from Andrews Air Force Base in Maryland to the White House—consuming more than two hours of valuable time. An available HMX-1 UH-34 Seahorse helicopter got the President to Air Force One in just seven minutes, and the squadron soon determined that the White House’s South Lawn could serve as a landing point for helicopters to carry the President to Andrews for longer flights or to other nearby locations, eliminating the time and trouble associated with limousine convoys. Soon, HMX-1’s Executive Flight Department established detachments at Joint Base Andrews Naval Air Facility and Naval Support Facility, in the District of Columbia and a quick hop to the South Lawn. In 1976, the squadron took sole responsibility for presidential flights, a mission it shared until then with the Army.

HMX-1’s mission assignments have made it the largest Marine Corps squadron. Currently, more than 700 officers and enlisted personnel are assigned. Several support functions not normally in operational squadrons, including a medical department, integral aviation supply and accounting activities, are part of HMX-1.

The Nighthawks’ former executive officer, Lt. Col. James Edmunds II, who answers to the call sign “Fast,” said the nature and pace of work assignments mean that HMX-1 operates uniquely in many respects. Orders are typically four years for any billet in this elite squadron. 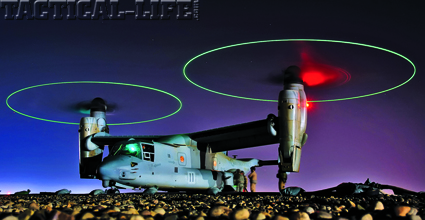 Assignments also are unusually competitive. In the case of aviators, a board comprising pilots from the squadron review each applicant’s qualifications and then determine who will be best qualified and the best fit for the squadron. Non-flying officer billets are based on rotation dates, ability to gain the necessary security clearances (required for all squadron personnel because of proximity to the White House) and desire to serve in HMX-1. Enlisted Marines apply for assignments through regular channels, although they must receive security clearance and have outstanding performance records.

Complex mission requirements also demand flexibility. OT&E is performed on both the “Greenside” and “Whiteside,” Edmunds noted, referring to the nicknames of the OT&E and Executive Flight Departments derived from rotorcraft paint schemes. Typically, enlisted Marines stay Greenside for two years and move to Whiteside once they complete security clearances. Pilots work both departments. Personnel start VIP missions once they have clearances and have completed all required training for the VIP rotorcraft with their white tops.

Another HMX-1 distinction is seniority. Given the requirements for personnel, on average, the squadron has more senior personnel on the Whiteside mission. There are more field-grade pilots than company-grade pilots because of the total flight hour requirement for acceptance to HMX-1, but being more senior does not mean these officers are first in line for additional pilot qualifications or being selected for Marine One.

Not surprisingly, HMX-1’s personnel are highly motivated. As a senior officer explained, “Motivation is high because of the mission that we perform. We represent the Marine Corps in a way no other unit in the USMC does. We have the most photo­graphed Marine standing at the bottom of the stairs when the President comes on or off the helicopter. We have to get it right because all eyes are on us.”

Remarkably, after more than 50 years of presidential flights, HMX-1 has flown only three helicopter types as Marine One, two of them briefly. Various models of the Sikorsky VH-3 have flown these missions since 1961 and remain in service today. With room for 14 passengers, the venerable Sea Kings have served the squadron well without a single mishap. It’s no surprise that the Marine Corps would like to replace this helicopter, but the Defense Department cancelled a recent program to field a new rotorcraft, the Lockheed Martin VH-71 Kestrel, after contractor cost overruns and schedule delays. 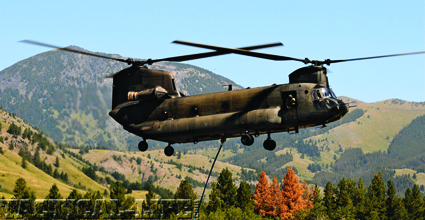 The Boeing CH-47 Chinook is the third contender for the VXX program to replace Sikorsky VH-3Ds. Although an older design than the H-3, Chinooks have been continually modernized.

Another procurement effort is currently underway, and aircraft under consideration include a Sikorsky model and the V-22 Osprey. In addition to the squadron’s VH-3Ds, smaller VH-60N Whitehawks, modified Sikorsky Blackhawks, also have served as Marine One since 1988 on some missions. HMX-1 also operates both CH-53E Super Stallions and CH-46E Sea Knights, carrying supplies and personnel in support of presidential flights when required. On many trips across the country and overseas that require helicopter flight, all these helicopters must be disassembled, transported in cargo airplanes, then reassembled, thoroughly checked and flight-ready when the President arrives on Air Force One. The work is intense. In total, the squadron fleet currently exceeds 30 rotorcraft.

As for the future, HMX-1 shows no signs of slowing down. In fact, the pace could accelerate as the President’s transportation needs grow. Rotorcraft upgrades and new helicopters or tiltrotors will continue providing presidential flights and retain the singular call sign, “Marine One.”