HELMAND PROVINCE, Afghanistan – A vehicle that looks like a hybrid of a tank and bulldozer comes to a stop. An enormous blast shrieks through the air and delivers 1,750 pounds of C4 on the road ahead.

The Marine Corps prepared the ABV crew and the vehicle for combat for approximately two years. On the morning of Dec. 3, the ABV fired its first line charge during Operation Cobra’s Anger in Now Zad, Afghanistan.

Due to mass amounts of roadside bombs expected around Now Zad, ABV’s led the way for the operation by detonating numerous line charges on the path to the Taliban stronghold, Now Zad.

Pride in the ABV’s development and capability was obvious amongst the Marines.

“There was no guidebook for this vehicle. We’ve had to develop our own tactics and procedures. I think that’s awesome. It’s very rewarding. This project is kind of like our baby. It’s pretty amazing to see it all come together,” said Sgt. Jeremy A. Kinsey, an ABV vehicle commander for 2nd Combat Engineer Battalion.

ABV’s played a pivotal role in the mission. Its demolition capabilities eliminated the Taliban’s IED threat on the foot mobile Marines’ breach into the city.

“A lot of people say the engineer community is the tip of the spear,” said Kinsey, from Sunnyside, Wash. “We have a saying: ‘if we can’t breach it, you can’t reach it.’ This operation is proving that. 3rd Battalion, 4th Marine Regiment, said that if they didn’t have our support, that this mission was a no go.”

The Marines of 2nd CEB referred to the front end of the vehicle as ‘Shredder’ from the cartoon series, “Teenage Mutant Ninja Turtles,” because of the vehicles pointed edges.

“We heard that the Taliban’s radio communication said, ‘get out, because the big boom is coming,'” said Kinsey. “I’d have to say; just the intimidation factor is enough to make anyone run. I know I wouldn’t want 1,750 pounds of C4 blowing up were I’m at.”

A moral affect on the enemy was realized by the ABV Marines.

“I know the Taliban didn’t want to give up this position and we took it very quickly,” said Kinsey. “All they really have left is Marjeh. To take something so important to the Taliban, so quickly, is like a big slap in the face for them.”

The Marines successes in Now Zad opened doors for future operations for the ABV and confirmed what they already believed.

“I believe our actions have proven our capabilities and will result in us employed more frequently,” Kinsey said. “Before this mission, they didn’t know what we were capable of. Now that the Marine Corps knows we can [fight], I think we will be used more.”

“I was proud and excited to do something that’s never been done before in the Marine Corps,” said Lance Cpl. Randy J. Davis Jr., an ABV operator for 2nd CEB. “Hopefully it helped the Marine Corps grow. This vehicle allows us to go through rougher terrain faster and I think the percentage of IED’s will go down with the use of this vehicle.”

Although the Marines engaged in combat, many wished they could have done more.

“I was actually hoping for more resistance, said Davis. “I think our explosion ran them all off. I was happy to fight for my country. We came out here to kill Taliban and liberate the peaceful people of Now Zad. All the Taliban kicked out the Afghan civilians. Now were just trying to give them back what’s theirs.”

The Marines could not be more pleased with the ABV’s performance.

“The performance of the new ABV’s was outstanding to say the least and I couldn’t be happier with the mission and the opportunity,” said Davis Jr. “We paved the way for 3/4 Lima Company to clear the city. I feel it’s an honor to fight with my brothers in battle.”

“These vehicles have been doing great,” said Lance Cpl. Brian S. Rutledge, an ABV mechanic for 2nd CEB. “We haven’t needed to do much maintenance with these vehicles. We were right there in case anything broke down, but it didn’t. We’ve done more work for other units than our own.”

The tight knit family of the ABV Marines suffered a loss before their deployment. Out of love and respect, they dedicated their first vehicle to their fellow Marine.

“I dedicated this vehicle in honor of 2nd Lt. Mevey, our first platoon commander who died in a motorcycle accident,” Kinsey said. “I think it would mean a lot to him that this ABV was the first to fire a line charge in combat, breach in combat, plow through a compound, and survive an IED blast. I think he would be very proud.” 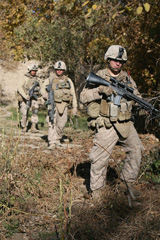 HELMAND PROVINCE, Afghanistan – A vehicle that looks like a hybrid of a tank…