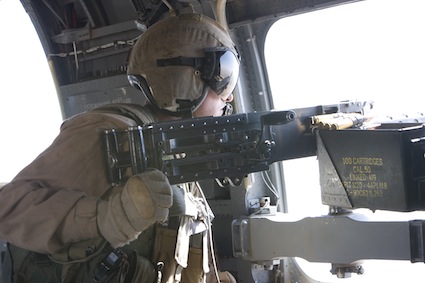 The Internal Communication System on board the CH-46E Sea Knight helicopter was clogged with chatter during live-fire drills at Firing Range W-174 over the East China Sea, as part of Marine Medium Helicopter Squadron 262’s ground threat-reaction training on Okinawa June 22.

The squadron, which is part of Marine Aircraft Group 36, 1st Marine Aircraft Wing, III Marine Expeditionary Force, conducted the live-fire training evolution while airborne in two CH-46E Sea Knight helicopters. The goal of the exercise was to enhance proficiency in combat effectiveness.

During the training, all crew chiefs gained more experience firing the XM-218, .50-caliber machine gun, and one of them earned flight hours towards his Aerial Gunner Qualification.

“In order to make sure you can be in the air by yourself and operate the XM-218 in a combat situation, you have to earn the AGQ,” said Cpl. Brent E. Warnhoff, a crew chief with HMM-262. “If we don’t know what we’re doing up there, we are no help to anyone in combat.”