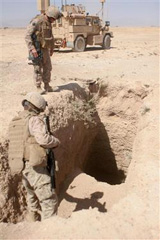 Some people go cave exploring for fun, but when there is a possibility of stumbling on explosive materials, an armed enemy or a nasty surprise they’ve left to be triggered in the dark, it’s about as far from fun as you can get.

Marines from 2nd Battalion, 3rd Marine Regiment, are searching wet, pitch-dark tunnels ranging from 40 to 100 feet underground that connect the karez system – a network of wells and tunnels between the snow-capped peaks of the Buji Bhast mountains and the arid desert plain here. The karez system was originally constructed hundreds, maybe thousands, of years ago. These days, insurgents are using these tunnels as a form of covert transportation and storage for IED-making materials. The Marines are putting a stop to that.

What’s it like descending along the sheer walls of these holes that travel all the way down to the limestone bedrock?

“They’re usually 40 to 60 feet down – straight down – and it’s really dark down there,” he described. “Every time we head down, I always tell my guys to be careful.”

Fortunately for these young men weighed down with gear, drinking water, weapons, ammunition and a flashlight, going down on foot isn’t always the first option they try. Sometimes they send down a robot – with varying degrees of success.

“Yesterday we sent the bot into three holes. In the first one it could only go in about eight feet, so we had to go in, retrieve it and investigate on foot,” said Markbot operator Cpl. Garrett Andrews the day after a series of tunnel hunts. “Later we sent the bot down but didn’t see any man-made passages.”

In addition to deterring the enemy from using the karez, the Marines are also trying to determine which wells will be irrigating which fields before planting season arrives in a few months.

“We’re also looking at the locals growing poppy,” said Paul. “Yesterday, we found one that is actually being used to water their fields.”

By identifying which wells are directly connected to potential poppy farmers, the Afghan government may be able to convince them beforehand to grow a different crop as they are doing in neighboring Helmand province. Two different areas there – Garmsir and Nawa districts – have seen a measurably decrease in poppy growth since government workers began distributing bags of wheat seeds around last year’s planting season. This year’s program is already in full swing.

Before that can begin here though the Marines still have a lot of work to do, and their recent activity around the ancient well system has drawn notice.

“Yesterday, the locals were driving by really close taking peaks here and there,” said Paul. “The local insurgents see that too. They’re looking at that to see if that’s another way to get us. We’re planning for that.”

Some people go cave exploring for fun, but when there is a possibility of…