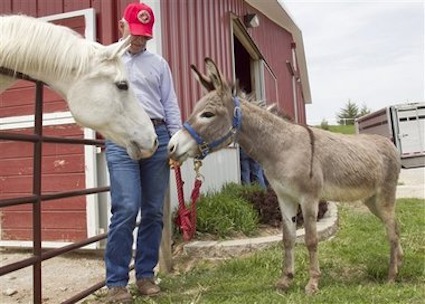 Retired marine Colonel John Folsom watches as Smoke, the Iraqi donkey, checks out Annie, a 27 year-old Arabian horse, at the Miracle Hills Ranch and Stables, in Fort Calhoun, Neb., Wednesday, May 18, 2011. After traveling more than 6,000 miles from Iraq, Smoke the Donkey, who became a friend and mascot to a group of U.S. Marines living in Iraq’s Anbar Province nearly three years ago, takes up residence in eastern Nebraska. (AP Photo/Nati Harnik)

Smoke The Donkey is now at his new home in an eastern Nebraska pasture after a more than 6,000-mile journey.

Smoke became a friend and mascot to a group of U.S. Marines living in Iraq’s Anbar Province nearly three years ago. The chest-high donkey, named for his grayish-tan color, soon became such a part of the unit that he received his own care packages and cards.

Retired Marine Col. John Folsom says Smoke “was a battle buddy, and you don’t leave your battle buddy behind.

So the Marines worked with the Society for the Prevention of Cruelty to Animals International bring the donkey to the United States.

Smoke arrived Wednesday at Miracle Hills Ranch, where he will live out the rest of his life as a therapy animal.

Source: The Associated Press via Newsvine.com.