That’s the nickname given by the crew to one of the 72-ton, 40-foot (12-meter)-long Assault Breacher Vehicles. Fitted with a plow and nearly 7,000 pounds (3,175 kilograms) of explosives, the Breachers, as they are commonly known, are the Marines Corps’ answer to the deadliest threat facing NATO troops in Afghanistan: thousands of land mines and roadside bombs, or improvised explosive devices, that litter the Afghan landscape.

The Breachers, metal monsters that look like a tank with a cannon, carry a 15-foot (4.5-meter) -wide plow supported by metallic skis that glide on the dirt, digging a safety lane through the numerous minefields laid by the Taliban.

If there are too many mines, the Breachers can fire rockets carrying high-grade C-4 explosive up to 150 yards (meters) forward, detonating the hidden bombs at a safe distance so that troops and vehicles can pass through safely.

The detonations — over 1,700 pounds (770 kilograms) of Mine Clearing Line Charges — send a sheet fire into the air and shock waves rippling through the desert in all directions.

Reporters watched the “Breacher” in action Wednesday as Marines edged closer to Marjah, a southern Taliban stronghold that NATO commanders plan to attack in the coming days in the largest joint NATO-Afghan operation of the Afghan war. Troops are expected to face a massive threat from mines and roadside bombs as they push into Marjah, 380 miles (610 kilometers) southwest of Kabul.

“This may be the largest IED threat and largest minefield that NATO has ever faced,” says Brig Gen. Larry Nicholson, the commander of all Marines in southern Afghanistan.

Several Breachers — including “The Joker” and its twin “Iceman” — will be used in the Marjah assault. Commanders hope they will make a huge difference as troops pierce through layer after layer of minefields circling the town.

“I consider it to be a truly lifesaving weapon,” said Gunnery Sgt. Steven Sanchez, 38, leader of a platoon from the 2nd Marines Combat Engineers Battalion.

A cross between a bulldozer and Abrams tank with a 1,500-horsepower turbine engine, Breachers are so valuable that they only travel outside bases along with a tank retrieval vehicle to drag them to safety if they are damaged.

Sanchez’s platoon drove Breachers in their first combat operation in December, when Marines reclaimed a section of the heavily mined Now Zad valley farther north in Helmand province. “We made history, and the Breacher did well,” says Sanchez, of Palm Desert, Calif.

“I’m happy to see that this monster is on our side,” said Rahim Ullah, a machine gunner in the Afghan army unit that will fight alongside the Marines.

Read the rest of the AP story at Yahoo! News. 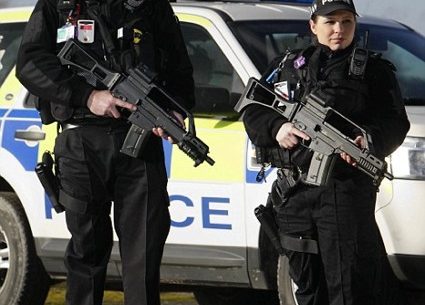 Meet Emily, a 4ft-10 British policewoman who jokes her Heckler & Koch is almost as big as she is.