The Marines and sailors grabbed their gear and loaded into white busses turned brown from dust and set out to Camp Leatherneck where they filed into ballroom-size tents and picked out places to bed down in their new home.

For some of the servicemembers the deployment marks a return to Afghanistan after serving there in 2008. For others, it is their first Afghanistan deployment, and in many cases, their first trip outside of the United States.

Later, the Marines get on phones in the early morning to hear the voices of friends, wives and children. Card and board games are played between training and work, as the Marines and sailors seek out a routine that can be maintained throughout the course of their deployment.

There’s a level of uncertainty tugging at everyone, but it’s expected, and solidarity and encouragement are easily found among the group, said Marine Lance Cpl. Brandon Bright, an administration clerk who is on his first deployment outside the United States.

Taliban and al-Qaida fighters, Bright acknowledged, are an intelligent and resourceful enemy.

“I’m not as worried about gunfire,” Bright said, noting he’s more concerned about the enemy’s use of improvised explosive devices.

“We can handle a straight-up fight,” Bright emphasized.

However, Bright said, the Marines and sailors also feel a sense of purpose and direction, as well as a thrill that comes with participating in something big and historic.

“I’m excited to be a part of the effort to help train and mold the Afghan military in order to lay the foundation for them to provide security and stability for their own people,” Bright said. “The biggest thing that I think will help is to just keep some degree of normalcy – to keep your mind off of what might happen.”

Navy Petty Officer 2nd Class Michael Esemann, a training specialist, is participating in his second deployment to Afghanistan with the 6th Marine Regiment. He looked back on the change between his first deployment and now.

“When I first got here last year, there was that feeling of loneliness and uncertainty and that thought of: ‘What have I gotten myself into?’” said Esemann, as he eyed several Christmas stockings sent by stateside well-wishers. “This time when we arrived, the first thought was: “’I know this place,’ and I felt surprised by how much it had changed for the better.”

Marine Gunnery Sgt. Richard D. Ayala also is on his second deployment to Afghanistan, which marks his sixth overseas deployment, overall. Ayala reflected on the difficulties facing Marines and sailors deploying to Afghanistan for the first time.

“Having to deal with a deployment this close to the holidays is probably the hardest part for most, especially those with wives and children,” said Ayala, a 15-year Marine Corps veteran. “You need to stay vigilant and press forward, always taking that 30-inch step.”

As he turned to leave, Ayala paused, and reiterated that the Marines and sailors need to be on their toes in Afghanistan.

“You need to remain focused and control what you can; don’t let your mind wander towards what you can’t.” 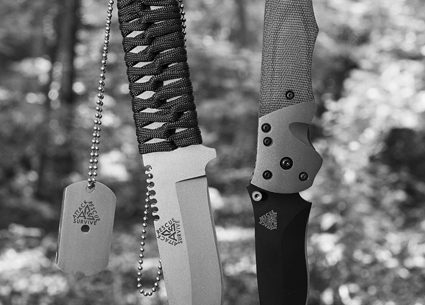 Worthy last-ditchers for when the chips are down and you need an Ace knife...