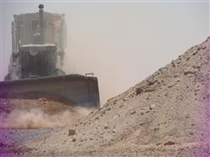 HELMAND PROVINCE, Afghanistan   —After a 10 hour bumpy, dusty drive through the desert, the United States Marine Corps has now secured the southernmost point of operations in Helmand province and begun construction on what will be the largest combat outpost ever built by Combat Logistics Batallion-8 out of Camp Lejuene, N.C.

“This is the tip of the spear. Right now we are the farthest south Marine Unit in Afghanistan,” said Capt. Chris Annunziata of Norfolk, Va. “Everything that happens south of the river depends on us.”

Within minutes of bulldozer and excavators being unloaded from flatbed trucks, construction began on COP Payne which overlooks the Helmand river valley. Annunziata, the onsite officer in charge of the construction project said building the COP will take just 96 hours to complete. The COP will serve as a logistical center for all operations that will eventually take place south of the river along the border with Pakistan.

By the end of the first day of construction, a ten foot wall of dirt and gravel surrounded the 600 foot by 600 foot compound and a burn pit was dug for disposing of garbage. At the same time, other crews are working on a fording site across the Helmand River and fortifying Khan Necsion, a former Taliban stronghold that will now be handed over to the district governor.

“I have the best equipped and most motivated Marines,” said Annunziata. “These men and women are true professionals and I couldn’t be more proud of them.” The Marines carried out their work under the oppressive Afghan sun with temperatures soaring into the 120s.

Across the river, a curious lone rancher and his herd of cattle watched as COB Payne took shape. He was the only Afghan seen since departing Forward Operating Base Dwyer the night before.

“I wasn’t expecting any contact with insurgents on the drive down here,” said convoy commander, Lt. Tabitha Pinter of Detroit, Mich. “This was a complete surprise. The enemy had no idea we were coming and they had no idea we’d take the route we took.” The convoy of 35 trucks and armored vehicles drove through 112 kilometer of barren desert where no roads currently exist.

The Marines aren’t letting the quiet beauty of the river valley catch them with their guard down.

“All was quiet when we built Fire Base Thunder. It was three or four days later the insurgents learned we were there and that’s when they started their attacks,” said Annunziata.

HELMAND PROVINCE, Afghanistan   —After a 10 hour bumpy, dusty drive through the desert,…