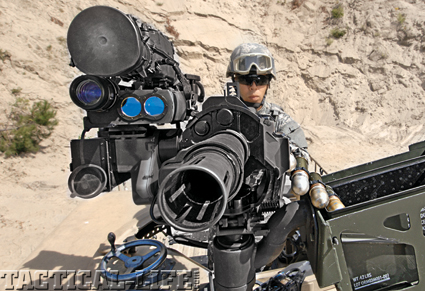 The Mk 47 Mod 0 40mm ALGL mates to a high-tech integrated target acquisition and ranging system as well as with HEAB ammo to become a new order of weapon that not only delivers first-round hits, but can deliver PP-HE/SD aerial burst rounds as well.

From the first rock or stick thrown, either at an adversary or at a creature that looked like food, the object of projectile or missile weapons has been to put destructive energy on the target. Until the advent of gunpowder, it was merely the weight and mass of the projectile transferring kinetic energy to the target. But as soon as it was discovered that an exploding projectile or missile could additionally carry chemical energy to the target, exploding missiles were used, followed by cannon with bursting projectiles. Of course both these methods are still used today.

Carrying kinetic energy to the target requires a projectile with both mass and velocity, which requires a strong and therefore heavy launch system, whose weight rises exponentially with the mass and velocity of the projectiles used. This reality has tended to limit kinetic energy rounds to small arms at one end of the scale or anti-armor artillery pieces at the other. 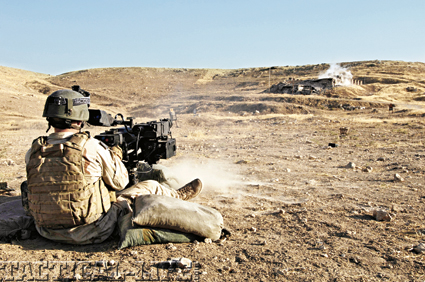 A SpecOps trooper gets familiar with the Striker 40mm as it was first deployed to the sandbox. The integrated target acquisition technology delivers the rounds just behind what would ordinarily provide cover.

The advantage of the larger shell is that it can carry a lot of chemical (explosive) energy in addition to its kinetic energy. What has always been needed is a system for Infantry that would deliver usable chemical energy at infantry ranges. First came hand-thrown grenades (the name coming from the pomegranate, which the early ones resembled); then came rifle adapters to throw specialized grenades farther and more accurately. Finally in the late 1950s were fielded dedicated grenade launchers in the form of the M79 “Bloop” gun that fired a self-contained cartridge with explosive projectile. This idea worked so well, it was soon followed by various crew-served belt-fed versions with similar projectiles, such as the preeminent Mk 19, which has been copied, licensed and imitated with varying degrees of success.

For all its strengths, the Mk 19 has two tactical limitations: It is heavy, which limits nimble deployment, and it may or may not prove effective on targets behind adequate cover. What would be a breakthrough would be to make it light enough for “light” infantry and give it a targeting and ammunition system that would accurately deliver airbursts to defeat targets in defilade.
Enter the Mk 47 Mod 0 40mm weapon system, a high-tech weapon that delivers on both counts. 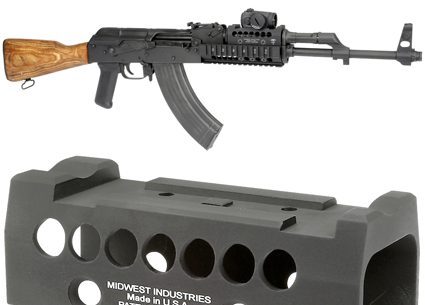