Nine years after losing his leg in a rocket-propelled grenade attack while on patrol in Iraq, Sgt. 1st Class Josh Olson has reinvented his Army career. Going from an Infantry squad leader to a wounded warrior, he is now a Paralympic shooter.

But in October of 2003, Olson’s future had been less certain. Recuperating at Walter Reed Army Medical Center with the loss of his right leg still fresh in his mind, Olson didn’t know if the last page in his Army story had just been written. He was confident he would complete rehabilitation in time to return to his duty station at Fort Campbell, Ky., to welcome home his battle buddies returning from Iraq. The last time they’d seen him, he was being pulled out of the wreckage of a humvee. Olson knew he would walk again with the use of prosthesis. What he didn’t expect was to discover a marksmanship talent that would lead him to make history at the Paralympic Games.

Nine years since the day that changed his life, Olson isn’t just still writing his Army story, he is creating new chapters as a pioneer and inspiration to a generation of wounded veterans and Soldiers.

When Olson, a member of the U.S. Army Marksmanship Unit, participates in the 2012 Paralympic Games opening ceremonies Aug. 29 in London, he will officially become the first combat-injured active-duty service member to ever take part in the event.

Through competitions and World Cups, Olson did well enough to secure a spot for the U.S. in rifle competition. In turn, the U.S. Selection Committee picked Olson to compete in two rifle event at the Games.

“When I got the call it was such a relief,” said Olson, who will compete in Mixed 50m Prone Rifle and Mixed 10m Air Rifle. “I felt like 500 pounds was taken off my back. I sat down and knew I would never have to carry that weight again. Now I could focus on the games as well as getting the new guys here to the unit.”

HISTORIC EXPANSION
The ‘new guys’ Olson refers to are injured Soldiers who are deemed able to continue serving on active duty. This past spring the Army approved the historic expansion of the USAMU with the addition of 24 new Soldiers to make up the newly-created Paralympic section and a marksmanship instructor group. It goes into effect Oct. 1. While his current focus is training for the Paralympic Games, he is also looking ahead to recruiting and mentoring other injured Soldiers who are facing similar life-altering circumstances and career changes as he did nine years ago.

“Now, instead of getting injured and being told ‘thanks for your service’ and you have to get out, the Army is affording Soldiers the opportunity to stay on active duty the same way I was,” Olson said. “Now all of that knowledge isn’t going to be lost and we can incorporate them into our shooting program and instructor group and keep making an impact on our Army.”

In many ways, Olson is a pioneer, something that isn’t lost on him. The poster child for humility, Olson recognizes he is setting examples all over the place for Soldiers who have been severely injured in combat. He said he looks forward to the day years from now when he can look back on this chapter in his life and see its results. 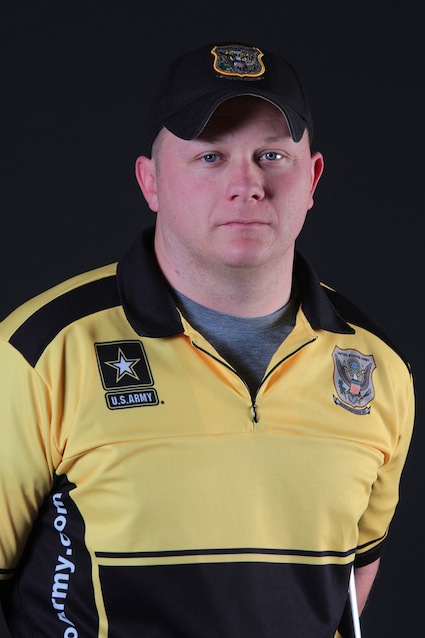 EMERGING TALENT
As part of his rehabilitation at Walter Reed, Olson said the nurses always tried to encourage patients to participate in activities. One of the outdoor events Olson took part in was a sporting clay shoot. After hitting 49 out of the first 50 shots that he took, people around him took notice.

The program director at the time called the USAMU and asked if they was interest in making wounded Soldiers into rifle shooters. Seven months later after a tryout and an interview, Olson was at Fort Benning assigned to the “Home of Champions.”

“Anybody overcoming anything in life, if they have a goal, if they have something to concentrate on, it really helps,” Olson said. “In shooting sports, it doesn’t matter how old you are or what your athletic ability is. I was pretty good at it right away and that’s when I realized that this is what I wanted to do.”

At the unit he was surrounded by world champions, former NCAA champions and world-class talent at every firing point. While he envisioned having to work hard to warrant his new battle buddies respect, he didn’t know that it had already been earned.

“When he first walked through that door I said to myself ‘that is a Soldier,’” said Staff Sgt. George Norton. “That is a Soldier from the line who has deployed, who has a lot of guidance, and I better respect him.’ That was before he ever

Olson worked hard at honing his new craft and in just a few years was an alternate on the 2008 Paralympic team. Not making the team stung, Olson admitted, but it was a motivational tool that he is reaping the benefits of this time around.

“One of the great things about shooting sports is even if you shoot a perfect score there is always some aspect you can improve on,” Olson said. “It’s what gets me out of bed every day. Some days I am tired, don’t want to shoot that day, don’t want to put my leg on–but there are people counting on me to perform well.”

Olson added that he doesn’t hope that those Soldiers who arrive at the unit follow in his footsteps but instead blow everything he ever did out of the water and succeed. That notion isn’t lost on Norton or his teammates at the unit.
“Shooting is a thing he had found very therapeutic,” Norton said. “So when he was given that opportunity I know he was able to use it. When they say he needed shooting I think shooting needed him, especially the Paralympic movement here in the U.S.”

THERE ARE OPEN DOORS
If he isn’t showcasing the Army worldwide in a competition or providing marksmanship instruction to Soldiers from around the Army, Olson is trying to inspire other injured Soldiers and veterans to realize that there are opportunities for them in the world.

“You may think all the doors are closed or shut in your face but if you look hard enough one is going to be open,” Olson said. “A lot of people quit after they get told no time after time. You can’t do that. If you keep trying, you’ll find a door that opens.”

The selfless acts of Olson are never lost on those at the USAMU. Junior Soldiers see him as someone they strive to be, not just as a shooter or as a Soldier, but simply as a person.

“Sgt. Olson is what makes this Army and this country great,” said Sgt. Joe Hein. “With what he’s gone through and what he’s accomplished since he’s been here and the people that he’s impacted around the world, it’s simply incredible. I try to live by his example.”

If fans are looking for someone to cheer for this summer in London, they should cheer for Olson, Hein said.
Olson said that he has been preparing for his moment at the Paralympics since he signed into the unit seven years ago. He doesn’t want to just go to participate in the Games — he wants to be the best in the world.

“I’ve been very fortunate to help liberate a country while in combat and make history,” Olson said. “Well now I get to make history again but in a total new battlefield, in the sports arena. I get to show the world a whole new side of a U.S. Soldier then they may have ever seen. I am going to show the world that you can knock a Soldier down but you can’t knock him out.”