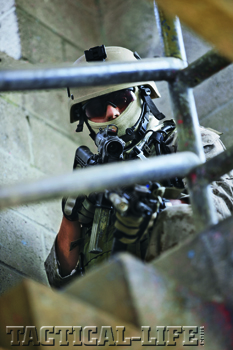 TW recently attended a pre-deployment work-up of a MARSOC (Marine Special Operations Command) team at Camp Pendleton, CA in which a number of new weapon systems and high-tech equipment were wrung out. This particular team was set to deploy to Afghanistan and was conducting MOUT (Military Operations in Urban Terrain) training in a mock village.

A MARSOC team consists of 14 men, commanded by a captain. There are four teams in a company, and there are four companies in a MSOB (Marine Special Operations Battalion). The day I observed the team, they were practicing a coordinated assault of two HUMVEEs on the “village” with the MARSOC Marines then conducting house-to-house clearing drills.

Part of the training included several of the Marines testing this new gear which ranged from a radically lightweight helmet, to a thermal breeching tool, to a new battle uniform. I wasn’t so much interested in their assault techniques or the way their HUMVEEs whisked through the “village” to keep their heavy machineguns bearing on their respective fire-zones: I was interested in their new toys.

Here are the highlights of what is the cutting-edge latest in high-tech weaponry that had the attention of these tip-of-the-spear MARSOC Marines. 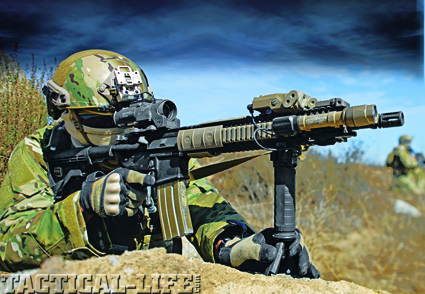 Wilcox Industries describes itself as a “job shop for Special Forces.” The innovative company has designed and manufactured everything from components for thermal sights to a navigation board for high-altitude jumping to a breathing apparatus for chem-bio hazards. Given their penchant for James Bondian devices, it came as a bit of a surprise to see Wilcox’s new vertical grip, a fairly low-tech piece of gear.

I should have known better than to judge a grip by its cover. Inside the Wilcox Universal Grip is a self-locking, self-deploying bipod. Machined from aircraft-grade aluminum and Mil-Spec anodized, the Universal Grip also serves as a master control for a separate IR laser and a white light.

Two small female plug holes are available on the Universal Grip that utilize the industry standard plug developed by Insight Technology for the ATPIAL laser (currently standard issue to Special Operations as part of the SOPMOD kit). A central toggle switch on the rear of the grip switches between the two plugs to trigger either the IR laser, white light or to deactivate them both. There is a momentary and constant-on button at the rear of the grip, suitable for either left- or right-hand use.

There’s a “dumb” version of the Universal Grip called the Steady Grip that has the same built-in bipod but lacks the electronic interface for lasers and lights. Wilcox also offers a Para Grip which folds flat against the rifle’s forearm. 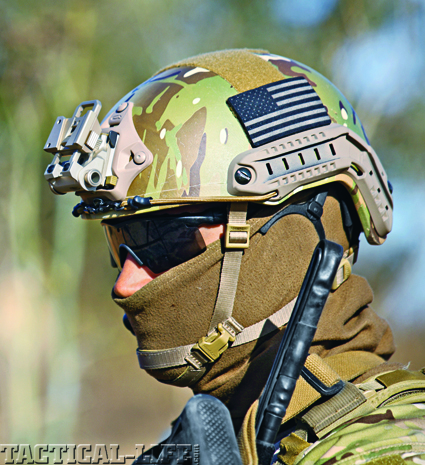 Shaving 20 percent of the weight off a standard MICH helmet, the new FAST helmet is made of carbon fiber and proprietary materials to offer NIJ Level IIIA and U.S. Army ACH specification ballistic protection—at less than three pounds! Ops-Core developed and manufactures the new helmet, which features four-position accessory rails for SureFire helmet lights, IR strobes or other attachments—non-snag and compatible with emergency break-away mounts.

The fit and comfort of the FAST helmet is light years ahead of a MICH brain bucket. There’s what Ops-Core calls an Occ-Dial at the back that expands or contracts the helmet’s cushioned inner liner for a custom fit. The chinstraps are even custom sized.

A MARSOC/WARCOM mount for NODs comes on the helmet as standard equipment along with two bungee straps to hold the NOD tight to the helmet it case it’s bumped out of its mount. One thing you don’t want is to drop your $8,000 NODs and lose them in the dark. The FAST helmet prevents this. The straps also prevent vibration or rattle from NODs.

Ops-Core also makes a non-ballistic version of the FAST helmet called the BUMP helmet. It features the same NOD mount and adjustable cushioned liner, but tips the sales at only 1.5 pounds. As its name implies, the BUMP is good to prevent knocks on the noggin, but won’t stop a projectile. 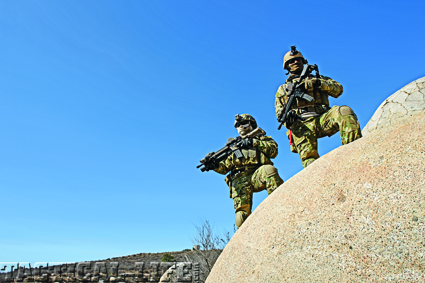 The inventors of the MultiCam camouflage pattern have developed a new battle uniform. The Crye Combat Shirt is a purely operational upper garment. This shirt is designed specifically to be worn under body armor, with a lightweight, flame-resistant, self-wicking material in the torso, and reinforced Mil-Spec rip-stop sleeves designed for Crye’s removable elbow pads. The Combat Shirt features a zip collar that allows easy on and off while keeping slings, straps and brass off your neck.

The Crye Combat Pant is also designed for operational use with none of the compromises of garrison wear. The Crye pants are aggressively cut for maximum mobility with a padded waist band and stretch panels in the knee and lower back. Crye’s removable knee pads can be inserted in an outside pocket in the knees.

The Coolness Factor
Others are trying to elbow their way into the high-performance eye pro market, but when it comes to downright comfort, performance, protection and the all-important coolness factor, Oakley reigns supreme. The MARSOC team was given Oakley Radar models with flat-black frames and non-shiny dark lenses. Needless to say, none were returned to the Oakley rep at the end of the training session.

Oakley also handed out pairs of its newest iteration of Assault Boots, a desert tan, waffled-soled wonder. Lightweight and athletically inspired, it offers the comfort of prime urethane shock absorption and the climate control of a moisture wicking liner. The vulcanized rubber sole includes directional lug geometry and provides wet/dry traction on both smooth and rough terrain.

Wilcox Mission Recorder
More in keeping with Wilcox’s high-tech calling card, several of the MARSOC team wore Wilcox’s miniaturized digital recorder known as the MHRS (Mission Helmet Recorder System). Fitted with a camera lens as small as a pencil eraser, the MHRS is comprised of day/night camera module, LED illumination system, a video and audio recorder and a power supply.

The MHRS fits onto a MICH or the new Ops-Core FAST helmet with minimal bulk and weight, yet can record 8 gigs of information or about 8 hours of video and audio. Useful for both training and operational purposes, the helmet-mounted recorder can be used to record documents and evidence, prisoner confessions and the actual details of an operation, literally from the operator’s viewpoint. 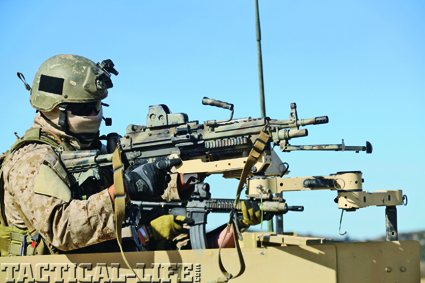 Manning an M240 7.62 machine gun mounted in an up-armored HUMVEE, this Marine provides support as his teammates practiced house clearing.

As the exercise drew to a close and the 14 MARSOC Marines heaved out of their plate carriers and laid their rifles and gear in piles, I wandered around and looked at their gear. I was struck by the fact that no two M4 rifles were the same. A hallmark of all the special forces is their acceptance and encouragement of individuality, and no where is this more evident than in their rifles, a Marine’s dearest possession.

Some sported M203 grenade launchers, others did not. I asked one Marine why… perhaps some of the team are designated as grenadiers. “No, it’s up to you. If you want to hump the weight, go for it. Some of the guys like the capability [of a 40mm grenade] so they don’t mind carrying it,” he said.
The optics on the guns included all the possibilities that are part of the SOPMOD kit. There were Aimpoints, ACOGs, EOTech’s and Elcans. Because this was a “close quarters” exercise, almost all the barrels were the short 10.5- inch length.

The guns mostly sported SureFire white lights (Scout model) with quite a few Insight M6 lights, which is the current SOPMOD issue. Almost every rifle had an Insight ATPIAL IR laser sight, which is also SOPMOD issue.

By the time this hits the newsstands, these MARSOC Marines will be part of the surge in Afghanistan. Trained to a razor’s edge and equipped with the very latest U.S. gear, the only thing I can say is that today is a very bad day to be a Taliban.

What do you mean by “MARSOC?” 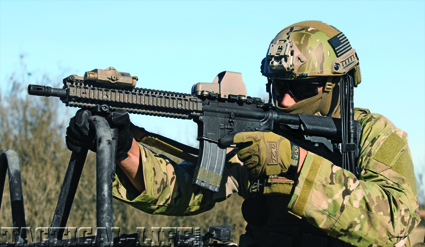 The very idea of a “special Marine” is anathema to the core of the Corps, which holds that all Marines are riflemen. How can you be “special” if you’re already among the few, the chosen, the proud?

When (SOCOM was formed in 1986, there were no Marines involved. The Leathernecks already had their Force Reconnaissance units, specially trained and equipped to handle the same sort of direct action missions that would become the forte of SOCOM. The feeling was that Force Recon was already an elite infantry component and it should stay within the Marine command structure.

However, after 9/11 the Marines began plans to integrate into SOCOM. The first unit to stand up was Detachment One, a pilot program composed mostly of Force Recon Marines from 1st and 2nd Reconnaissance Companies that fell under Naval Special Warfare Group 1. “The Det,” as it was known, distinguished itself in Iraq in a variety of missions, validating the selection and training process that the Marines had implemented to hand-pick “special” Marines.

The Det was disbanded in 2006 when the Marines became a fully integrated component of SOCOM. Today the same hand-chosen Marines, again mostly from Force Recon companies, make up MARSOC—Marine Special Operations Command, a part of SOCOM. 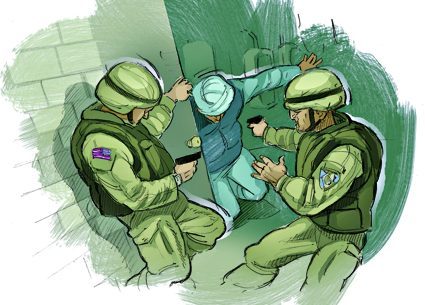