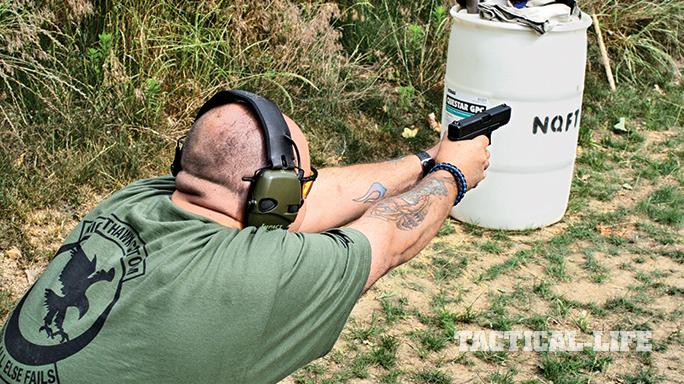 1 of 8
Massad Ayoob: Why the GLOCK 19 Gen 4 Is Great For Beginners, Pros
Firearms instructor Chaz Murray demonstrates a qualification shoot for students with his G19. 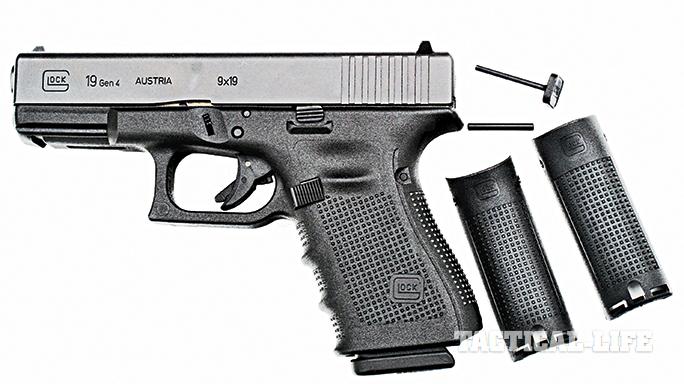 2 of 8
Massad Ayoob: Why the GLOCK 19 Gen 4 Is Great For Beginners, Pros
The G19 comes with interchangeable backstraps. 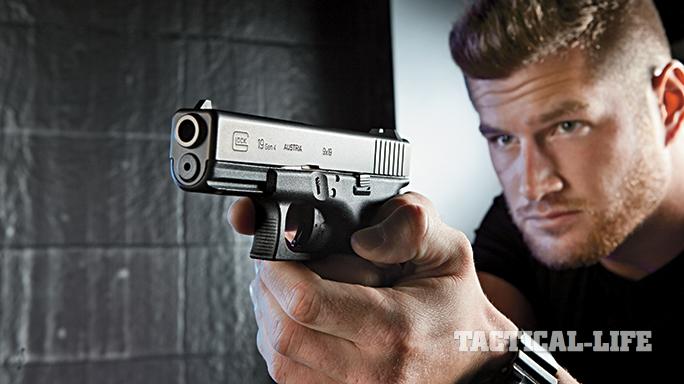 3 of 8
Massad Ayoob: Why the GLOCK 19 Gen 4 Is Great For Beginners, Pros
This shooter has total control over his Glock 19. 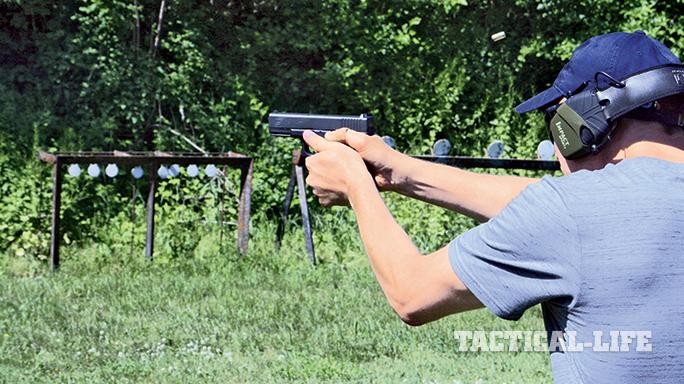 4 of 8
Massad Ayoob: Why the GLOCK 19 Gen 4 Is Great For Beginners, Pros
This shooter has total control over his Glock 19. 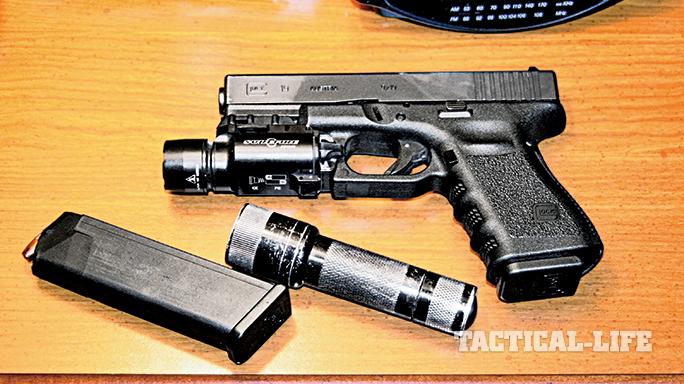 5 of 8
Massad Ayoob: Why the GLOCK 19 Gen 4 Is Great For Beginners, Pros
The author carries a stock Glock 19 with a weapon-mounted light, a backup flashlight and a spare Glock 17 magazine. 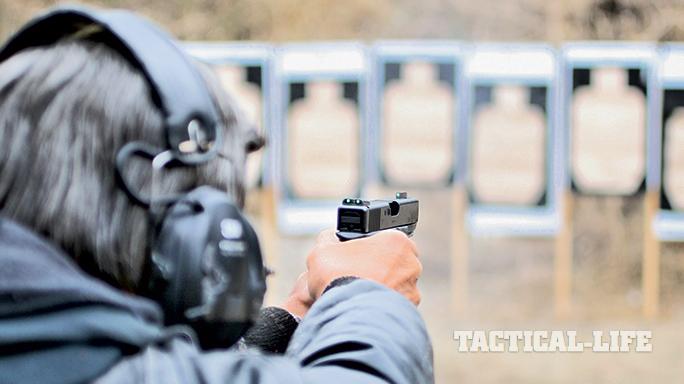 6 of 8
Massad Ayoob: Why the GLOCK 19 Gen 4 Is Great For Beginners, Pros
The author shoots a 300/300 pace-setter qualification on IPSC targets at a class in South Carolina. 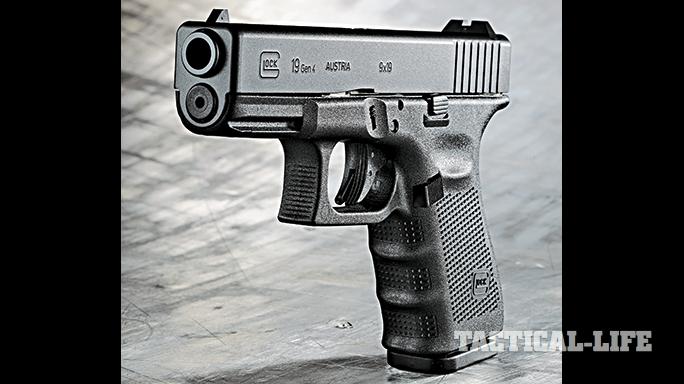 7 of 8
Massad Ayoob: Why the GLOCK 19 Gen 4 Is Great For Beginners, Pros
“Some close to the company call the G19 the ‘gateway Glock,’ because so many people who now own several Glock pistols for assorted purposes started their collection with a G19 Gen4.” 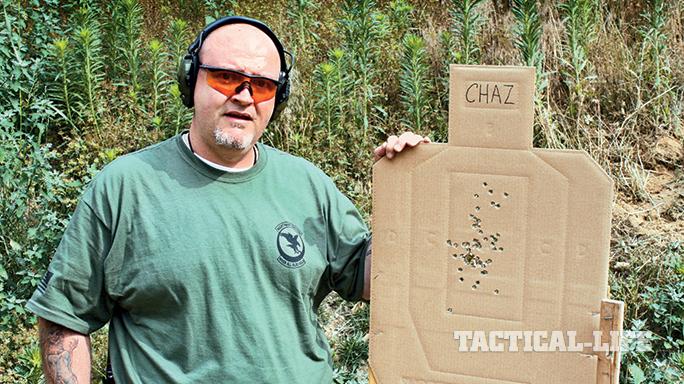 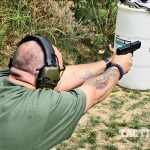 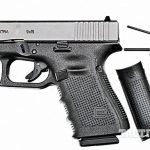 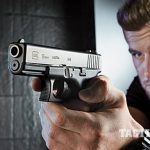 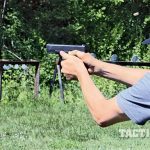 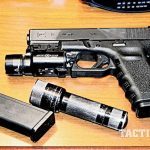 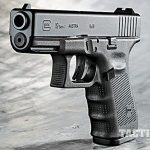 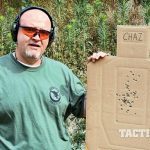 The various militaries throughout the world probably buy the full-size 9×19 Glock 17 service pistols for their fighting men and women than they do any other Glock. In the United States, where the Glock is by far the most popular brand of police duty handgun, the .40-caliber Glock 22 seems to have been adopted as standard issue by more law enforcement agencies than any other. Among law-abiding private citizen gun owners, however, the most popular model appears to be the Glock 19. Some close to the company call the G19 Gen4 the “gateway Glock,” because so many people who now own several Glock pistols for assorted purposes started their collection with a G19 Gen4. It’s a significant phenomenon that can be explained.

We offer as a case study one Gail Pepin. Ms. Pepin, a Chicagoan, grew up in a non-gun-owning family. Several people in her circle of friends were in the same situation, and one night they found themselves wondering what the attraction of firearms was to those who were so enthusiastic about them. They all had open minds and decided to find out: They signed up for an introductory course in gun safety and shooting.

“Some close to the company call the G19 the ‘gateway Glock,’ because so many people who now own several Glock pistols for assorted purposes started their collection with a G19.”

Pepin was hooked. She soon bought her first firearm, a Ruger .22 pistol, and quickly after that decided it was time to upgrade to something more powerful. Her first choice, her “gateway gun” as she entered the world of serious handgunning and action shooting, was a Glock 19. With it, she took a highly rigorous training class taught by ex-Chicago cop Jack Manfre.

Soon she was competing, and early on she won a Glock 34 at a pistol match. She moved to the more gun-friendly South and went on to win the female champion titles in the Florida State IDPA Championship, the Florida/Georgia Regional Championship, and twice, the national-level Polite Society match. Today she owns an array of Glock pistols ranging from the 6-inch-barreled Glock 17L to the little Glock 26 subcompact. Still, the pistol she most often chooses for daily wear is her “gateway” Glock 19. “It’s been modified with Trijicon night sights, and has some grip stippling by Dave Maglio,” she said. “In all  these years, it has never malfunctioned. If I could only keep one of my guns, it would be this one.”

As good a beginner’s gun as it is, use of the G19 is by no means restricted to amateurs or first-time gun owners. Many professionals use the pistol as well.

Firearms instructors often teach with a Glock 19. A few years ago, I walked into an Arizona courthouse with two other instructors attending the same trial. I was there as an expert witness for the defense. Instructor James Yeager, who had taught the defendant, was there as a material witness, and highly decorated, retired combat soldier Dan Southard was there working with the defense team behind the scenes. As we secured our personal carry pistols in the courthouse lockers, I couldn’t help but notice that all three of us were carrying G19s.

When I took the Advanced Pistol course from former World IPSC Champion Frank Garcia at his Universal Shooting Academy in Frostproof, Florida, most of the students in the class were serious competitors using custom match pistols. I noticed that Garcia was shooting with an ordinary G19. He explained that he had been spending a lot of time teaching American allies over in the sandbox, and since the Glock 19 was the gun most of them used, that was what he taught with, and he had bonded with it.

“As good a beginner’s gun as it is, use of the G19 is by no means restricted to amateurs or first-time gun owners. many professionals use the pistol as well.”

For many years I shot on Team Panteao with “Super Dave” Harrington, U.S. Army, retired. When I saw Harrington teach a class, the gun on his hip and in his hand was a Glock 19.  He and I shot in the Florida State IDPA Championships one year, and Harrington competed in the Enhanced Service Pistol class against tricked-out, match-grade 1911 9x19s and such with his stock G19 carry gun. He kicked butt, too, I might add.

The G19 is popular among female trainers. Kathy Jackson of Cornered Cat often teaches with her G19, and I’ve seen Gila Hayes do the same.

Law enforcement is big on the G19, too. Dave Maglio is a career lawman in Wisconsin and Midwest Regional Champion in IDPA. He always used a Glock, and was grateful when his agency switched to the Glock 9×19 from their previous pistol for standard issue. He was noticing some lower back discomfort at work and traced it to the shape of the driver’s seat in his patrol car. The butt of his issued sidearm was making enough contact that he was unconsciously twisting his hip. He turned the pistol back in to the department and was issued a G19 Gen4. With its shorter butt, he still had 16 rounds of potent 9×19 +P+ ammo ready to go, but the back discomfort disappeared. “Going to the G19 Gen4 was like taking off boots and putting on slippers,” he said.

The New York City Police Department, the largest in the nation, authorizes three different models of double-action-only, 16-shot 9×19 pistols for its armed personnel, who choose and buy their own sidearms. The overwhelmingly most popular choice, on the order of at least two-thirds, is the Glock 19. It’s the lightest of the three approved guns, which makes a difference on the heavily encumbered duty belt of a uniformed cop. It’s also the most compact, and because it has the shortest trigger pull, many find it the easiest to shoot well.

The compactness is important for other reasons. Throughout their tenure, many cops go back and forth between uniformed and plainclothes assignments as they move up the career ladder, and they always have to consider off-duty carry. The G19 gives them a single, familiar weapon suitable for these varied duties. Of the choices authorized by the New York City Police Department for uniformed work, the Glock 19 is by far the smallest and lightest pistol.

Competitive shooting sees the G19 in play—and not just at the entry level. Garcia and Harrington aren’t the only ones who make this little pistol stand up and dance at the highest levels of competition. In Glock Sport Shooting Foundation (GSSF) matches, one of the “matchmeisters” to beat is Mike Ross. He owns all sizes of Glocks, but shoots GSSF main events with a G19, including a Glock 19C set up with all the bells and whistles for Unlimited events. He tells me that the shorter slide brings the sights back on target for him faster. Of course, Ross has also won overall GSSF matches using a subcompact Glock 26.

Several military entities have found a place for the Glock 19 as well. Gaston Glock conceived the original Glock 17 as a military service pistol, and it has been successful in that role worldwide. However, military intelligence personnel and military police with plainclothes functions analogous to the U.S. Army’s Criminal Investigative Command (CID) appreciate a slightly smaller handgun due to its greater concealability. The U.S. government has purchased G19s in significant volume to arm the police and other uniformed services of allied nations, such as the personnel Frank Garcia has trained in the Middle East.

A few years ago I had the good fortune to win the ILEETA Cup championship (with a Glock 17), and my award, in addition to the trophy, was a Glock 19. It came out of the box shooting straight to the sights, and I left it as is, right down to the white-on-black sights.

Teaching with it confirmed the lesson that you don’t need a pistol costing thousands of dollars to shoot well. My teaching gun is normally my carry gun: I’m confident with the Glock 19, comfortable with it, appreciate its low profile and its light weight for all-day concealed wear, and I don’t feel at all disadvantaged with 16 rounds of Winchester Ranger T-Series 127-grain +P+ ammunition and 17 more in a backup Glock 17 magazine.

In demonstrating the final exam for students before they shoot their qualification score, my Glock 19 has never failed to produce a score other than 300 out of 300. It’s really hard to ask more than that from a pistol. Its universal appeal has made the Glock 19 the most popular among private-sector U.S. buyers. It deserves its reputation as the “gateway Glock,” and it has also earned its large and loyal following among professionals.

For more information on the Glock 19, please visit US.Glock.com. 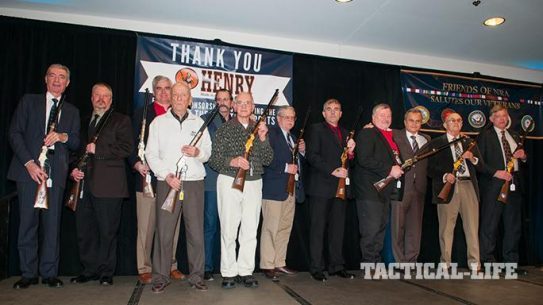