by Bob Pilgrim
in Uncategorized
0 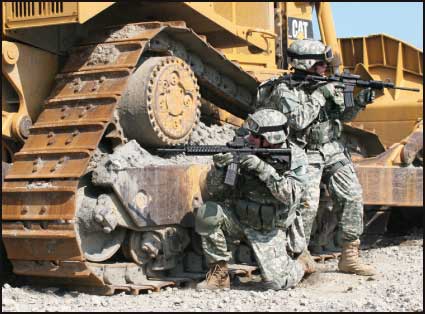 While strapping in and cranking up the engine, the inescapable sound of a particular AC/DC song “Dirty deeds done dirt cheap,” runs through my head. One of the most indispensable, but unheralded, warriors in urban combat is the cat-skinner on a converted Caterpillar D9 Bulldozer. This 54-ton behemoth is the bane of an enemy who chooses to fortify himself in buildings and houses, waiting to ambush and snipe. The defender of these fortifications usually enjoys a significant tactical advantage over those who must enter and clear these enemy lairs. To them I say, “Dirty deeds, done dirt cheap.” 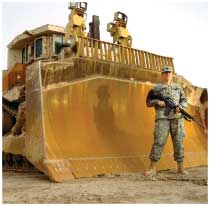 Relatively blind to the defender’s presence and location, significant friendly casualties were taken during the battle of Fallujah. Enemy insurgents were ready and waiting when Marines and soldiers executed forced entries into structures. Even with pre-entry preparation by small arms, grenades, tank and artillery fire, the Hajji often survived and fought to the death. When resistance was too formidable, troops would pull back and employ some type of supporting arm to destroy the entire building.

Air strikes with expensive laser-guided bombs definitely do the job, but one of the most cost-effective pieces of combat engineering is the armored D9. It’s one piece that is deeply feared by the enemy because it can crush them in place. There is nothing more terrifying than to have a building disintegrate around you with Marines outside. Add to that the D9’s seeming invincibility. This armored “Cat” has been known to take numerous hits from RPGs and other anti-armor weapons, but it keeps on coming. On top of its rugged superstructure, this beast is simply scary as it bears down on your side of a building. They are so tough that in combat, they have actually been used to clear routes for tanks.

In Use Since Normandy Invasion
The use of reinforced earthmovers dates back to World War II when they were modified by the British, in preparation for the invasion of Normandy. Called “Hobart’s Funnies,” the CAT D8s, along with other unconventional armored vehicles, were operated by the United Kingdom’s 79th Armored Division. Their missions were to clear beach obstacles, cut through berms and hedgerows, make roads off the beach and fill in bomb craters. Although very effective in this role, they were slow and ponderous and could not keep up with faster tank formations. For this inland role they were replaced by the Centaur bulldozer, which was a turret-less Cromwell tank fitted with a blade. The Centaur survived and eventually saw further British service in the Korean War.

Added Firepower Extends Missions
Prior to Operation Iraqi Freedom, the “Doobi,” literally “Teddy bear” in Hebrew, saw extensive use in many Israeli conflicts. Again, a CAT D9 was given a steel-and-ballistic-glass facelift, so it could withstand heavy attacks and thereby survive in hostile environments. IDF (Israeli Defense Force) developed and installed an Israeli-manufactured armor kit that protects operating systems and the operator’s compartment. The armor will defeat typical military small-arms fire, explosives attacks and in some cases, has withstood RPG assaults. Add-on stand-off armor has been fitted to prematurely detonate or deflect “shaped charge” armor-penetrating munitions, and the protective package adds an additional 30,000 pounds for a gross total of nearly138,000 concrete-and-steel-crushing pounds.

Some D9s have been further upgraded to carry machineguns and grenade launchers that can be fired from a crewmember’s hatch, a means of active defense. The IDF relies heavily upon their Doobies for digging protective moats, clearing land mines, surmounting sand barriers, building fortifications, clearing terrain obstacles, demolishing enemy strongholds and opening routes of egress for vehicles and infantry. In many situations, they will actually proceed ahead of armor to create breaches in enemy obstacles.

Counter Terrorist Operations
The armored dozer has proven so effective that during the entire three-year struggle with the al Aqsa intifada, not one D9 operator was killed. In an effort not to put Israeli soldiers at unnecessary risk, armored D9s were used to “shake” buildings occupied by Palestinian guerrillas, forcing them to surrender. Once the houses were vacated they were demolished by the same dozers so that explosives and booby traps were either detonated or buried. After 13 Israeli soldiers were ambushed and killed in Jenin and in Hebron, where a Hamas leader was barricaded, the D9s were used successfully to resolve both situations.

One Man Wrecking Crew
It was almost out of a movie script like the Dirty Dozen. An Israeli reservist soldier, a trouble maker and boozer who was constantly on the verge of disciplinary action, in and out of military stockades and generally an anti-authority figure, was charged with bribery and arrested. But he became one of the heroes, or depending on your perspective, a bloodthirsty villain, of the Jenin Battle with his armored Cat. With “nothing to lose,” he bid his wife a fatalistic good-bye and was given a couple of short hours training in the operation of the Doobi. He was incensed over the ambush and killing of his fellow soldiers, which made him highly motivated to avenge their deaths. Call sign “Kurdi Bear,” he drove the D9, “with charges exploding around him,” 75 hours non-stop. Taking swigs of “whiskey and snacks,” he leveled, or as he stated to the press, “erased” nearly 100 houses in the refugee camp. As he put it, “I made them a stadium in the middle of the camp.” An ardent soccer fan, he attached the Beitar team’s flag to his armored dozer and proceeded to drive through all resistance to deliver food to soldiers who had not eaten in two days.

As far as threats to his dreaded treaded machine he related, “Even 80 kilos of explosives only rattled the bulldozer’s blade… It’s a monster. A tank can get hit in the belly. With the D9 you should only look for RPGs or 50 kilos of explosives on the roof. But I didn’t think about it then. The only thing that mattered was that those soldiers should not risk themselves just to eat or drink something.”

Iraqi Operations
The U.S. military purchased TPK (Tractor Protection Kits) from Israel for the D7 CAT for use in mine-clearing and earth-moving missions during Operation Desert Storm.

Currently in Iraq, our forces have acquired these TPKs for their D9 versions, now extensively used to remove IED-destroyed vehicles from roads and missions similar to those conducted by the Israelis such as the destruction of enemy bunkers and fortified houses.

When Marine infantry encountered stiff resistance from an enemy-occupied building during Operation Phantom Fury, they not only collapsed buildings with its 14-foot-long and seven-foot-high-blade, they also pushed destroyed tanks and other derelict Iraqi armor, preventing the enemy from employing them as obstacles, cover or concealment.

D9s, like other armored vehicles, were “bullet magnets,” especially for the dreaded RPG, and Marines assigned to escort them invariably got lots of trigger time. But, because of the D9s huge profile it made an exceptional piece of mobile cover for the troops who surrounded and followed it. When the two merged into an offensive unit they made a combat team that was difficult to defeat.

The “Delta Niners” were also prized by the bone-weary troops when it came to building hasty fortifications for satellite bases and FOBs (forward operating bases). If open areas were chosen to “go firm” or establish an artillery position, a CAT could tear through the earth with its giant, claw-like “ripper” and quickly doze up a formidable barrier that would protect the troops from direct fire weapons and physical assaults.

When man and weapons of war fail, Mother Nature can get her licks in. With a high berm separating First Battalion, Eighth Marines’ Charlie Company, the order to attack was given. A D9 loaded with mortar ammunition led the grunts by punching through the 30-foot tall barrier. However “Murphy” intervened and the dozer got hopelessly stuck in the mud. The number two CAT could not maneuver around the bogged-down machine and as one participant related, “The whole plan began to go to shit in a heartbeat.” Ammunition was transferred to the second D9 and the Marines continued to march. Iraqi mud proved to be a formidable foe and on a number of occasions what appeared to be solid ground gave way, holding tracked vehicles when needed in the viscous and fetid mass.

Frustrating Terrorist Infiltration
Terrorist and insurgent infiltration has been a chronic problem along the border of Iraq and Syria. D9s were deployed to the border of Husaybah to “improve the international border” between the two countries. An infiltration and ex-filtration route for personnel, weapons and equipment, the border control point was ordered closed by the Iraqi government. Two D9s, building a quarter-mile of border a day attacked the mission in three phases. Initially, a five mile long, 6’ deep trench was dug by one machine. The dirt removed was used by the other to build a 10’ berm. On top of the earthen barrier, combat engineers strung layers of concertina wire. The project took nearly 5 days and the opposition expressed their discontent daily. Neither D9 nor their operators were dissuaded by hostile activity.

Tomorrow’s Battlefields
In the future, we will see the air-transportable and low-profile M9 ACE (armored combat earthmover) streaking along roads at 30 mph. Its unique suspension allows the front to be raised, lowered or tilted for dozing, excavating, rough-road grading and ditching.

When one thinks of war and ground combat, the rifleman comes immediately to mind. Then, one is likely to think of tanks, artillery and close-air-support. Combat engineers play an enormous role and can effectively influence the outcome long before a battle is joined. They may not get the credit due to them, but rest assured the troops whose mission they support know who and how effective they really are.