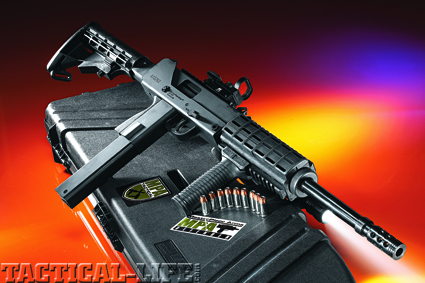 The MPA1-SST-XX from MasterPiece Arms is a MAC-10-inspired .45 ACP carbine that features a full complement of tactical enhancements including a Holosight, collapsible AR-style buttstock, rail-equipped forend with light and foregrip, and threaded-on muzzle brake.

The MAC-10 or M10 (its actual designation) as originally manufactured by Military Armament Corporation in 1964 has become almost iconic in its appearance. Seen in service beginning in the 1970s, it was and still is one of the most prolific weapons seen in many movies today. Being the old guy I am, the movie that comes immediately to mind is one of John Wayne’s last, Mc Q. He uses an M10 to great effect at the end against the bad guys. It can’t get any better than a hard-charging police lieutenant that drives a 1973 Trans Am and shoots a suppressed MAC-10.

Originally designed to be a machine pistol in .45 ACP, it has been manufactured by many others in its original fully automatic form. John Ingram’s design was simple, reliable and rugged. It clearly fit into that category of firearm that could be used as a deadly weapon whether operational or not (as a bludgeon).

This was rugged simplicity at its best. A precision weapon it was not. Although this weapon system was also chambered in the .380 ACP, the original was the venerable .45 ACP — a machine pistol firing from an open bolt at a pretty significant rate of fire. The .45 ACP variant could reach close to 1,200 rounds a minute depending on ammunition, and the M11 (.380) was well over that. I remember being able to empty the magazine of that weapon before the first piece of fired brass hit the deck!

It was this rate of fire that made it very difficult to handle. In the wrong hands, or hands not strong enough, it was not uncommon to scribe a line on the ceiling as the weapon rose. The solution to that was either a suppressor or fake suppressor that screwed on to the barrel allowing for two-hand control. Due to this and some other factors it did not see a huge amount of use in the military, just some use by Special Forces units in Vietnam.

It was seen at the occasional police department, but once again not with any regularity. It mostly became a truly affordable machine pistol of the masses, and prior to the 1986 ban they were one of the most prolific. With the ban, the weapon’s manufacture was all but discontinued in 1986, but it remains a popular weapon in the transferable market. Even today they are typically under $4,000, and that is towards the bottom of the price scale for transferable machineguns today. What was needed to keep this popular design going was a semi-automatic variant, and MasterPiece Arms (MPA) has stepped in and done a really good job. 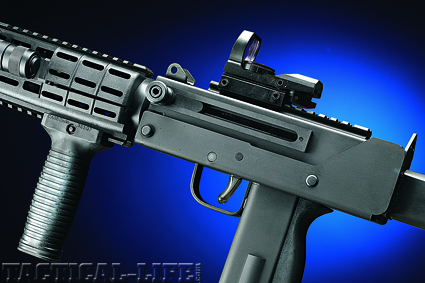 The carbine employs a side-charging handle to allow the use of a top-mounted optic rail.

Although the original, fully automatic design was quite effective in highly specialized military applications, it was not really suited to LE work due to its high rate of fire combined with its compact size and commensurate controllability issues.

On the other had, in a semi-automatic-only form it can be a totally different animal. In fact, semi-auto variants of the design became quite popular on the civilian market after the 1986 ban. However, in order to make this system legal for sale as a semi-automatic firearm, the first thing that had to go was the open bolt.

While a moderately effective means for use on a machinegun, open-bolt operation has some accuracy issues, not to mention they are no longer allowed by the BATFE on a semi-automatic gun as they are just too easy to convert to full-auto and have been banned since the 1980s. MPA has filled that bill, and done so with some other features. These are American-made firearms manufactured in a state-of-the-art plant that carry a lifetime guarantee.

Like many, if not all of the newer firearms manufacturers today, MPA uses CNC (Computer Numerical Control) machinery. This is essentially machining that is under the control or mapped out by computers and is incredibly accurate and precise. It is one of the most significant contributions to the increase in quality-made firearms and parts today. It allows for consistent quality production and lower costs. MPA utilizes these machines to build this weapon in two different calibers, and in a number of variants.

The MPA-10 is the .45 ACP version, and the MPA-30 is the 9mm variant. These weapons come with barrel lengths of 3.5, 6, 10 and 16 inches in 9mm and 6, 10 and 16 inches in .45 ACP. They can be ordered with “safety extensions” that simulate the suppressors of old, as well as rifle stocks, forends, other muzzle brakes, and even a flashlight rail and barrel extension for the 3.5-inch 9mm pistol.  The 9mm version utilizes 32-round Sten gun magazines and the .45 ACP models utilize 30-round M3 “Grease Gun” magazines.

Although Masterpiece manufactures pistol versions of these classic designs that are very reminiscent of the original machine pistols, it also has developed some really innovative carbine variants that really push the performance levels of these semi-automatic guns to the next level. I recently had an opportunity to try out one of these for myself.

The weapon provided for testing is listed as the company’s “Tactical Rifle.” It is a MPA-10 in .45 ACP fitted with a ton of tactical accessories, a 16-inch barrel and an AR-15-type buttstock that has multiple adjustments. Dubbed the MPA1-SST-XX, the carbine has an Intrafuse Foregrip that utilizes quad rails with covers. This allows for attachment of the included 120-lumen tactical light as well as the pistol grip. The receiver has a Picatinny rail attached that allows for the use of the also-included multi-reticle Holosight. This necessitates the need for a side bolt conversion.

The basic pistol comes with the bolt on top as on the original design. The side-cocking handle allows for a left-side charging handle that is so familiar on many other systems. The system comes with one 30-round magazine, but more can be ordered on their website. 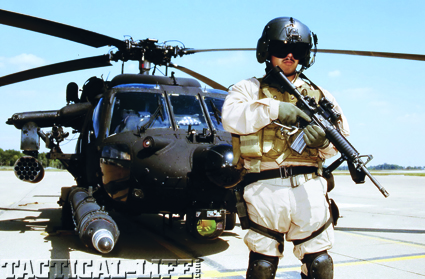 The MPA1-SST-XX from MasterPiece Arms is a MAC-10-inspired .45 ACP carbine that features a…