I remember my first contact with an RPB MAC-10. It was produced shortly before they were forced to redesign it to fire from a closed-bolt.

Despite what many think, open-bolts have several negatives. The first, according to several sources, is that the firearm can be converted to full-auto more easily, which is something Uncle Sam doesn’t like too much. Another problem is accuracy is compromised when a massive bolt slams forward each time you pull the trigger, driving the muzzle off target—not that anyone ever thought the MACs were going to win an accuracy competition. With less than stellar accuracy, after I got past the ‘cool’ appearance, I decided the MAC open bolt models were “ho-hum” handguns. A decade later I had several opportunities to work with a suppressed, full-auto, open-bolt MAC,
and discovered what the mystique of the MAC-10 was all about! It still was lacking in the ac-curacy department, but could it shoot. After a few more closed-bolt MACs passed through my hands, I decided semi-auto closed-bolt models were capable of decent accu-racy and seemed more fun to work with than open bolt models.

I suppose others felt the same attraction, because after RPB closed their doors several folks tried unsuccessfully to make a go of offering their “MAC-10s.” Then in 1992 MasterPiece Arms sprang into being. Well, not really “sprang,” con-sidering Gary Poole, MPA’s founder, was a machinist whose shop had manufactured parts for RPB and their successor SWD. This definitely gave him a leg up when it came to re-establishing MAC pistols. 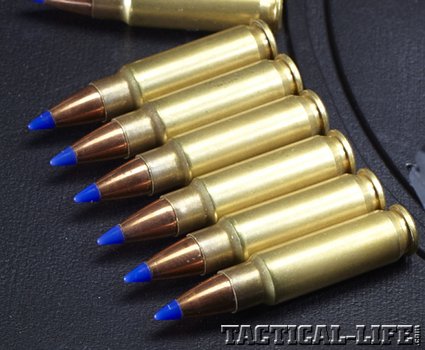 The 5.7x28mm round is high in velocity but low in recoil, mitigating some concerns with the platform.

MPA’s goal was to improve the pistols (and car-bines) using modern manufacturing technology such
as CNC lasers, lathes and machining centers as well as extensive quality control for the parts production, while maintaining the blowback system. Design improvements of the bolt and extractor were incorporated, along with the option of a side or top cocking handle model.

In 2008, Poole sold the company but remains active in it. Their Protector series contains their new .380 subcompact pocket guns and new pistol, the MAC-like MPA57 SST (SST stands for Side cocker, Scope mount, Threaded barrel), chambered solely for 5.7x28mm.

The 5.7x28mm round was designed in the early 1990s for use by military and LEOs in a Personal Defense Weapon (PDW). Its main traits are low recoil, high velocity, and penetrating body armor with the right bullet. Eventually, with the advent of commercial ammuni-tion loaded with bullets appropriate for recreational use, and no fear of armor penetration, the round found its way into the general public, chambered in a few firearms, including at least one pistol. 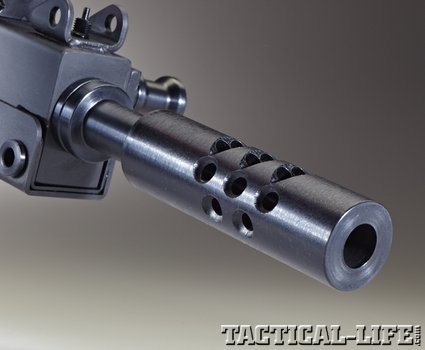 A 3-inch long muzzle break is integral to the barrel, easing the impact of the weapon’s recoil. 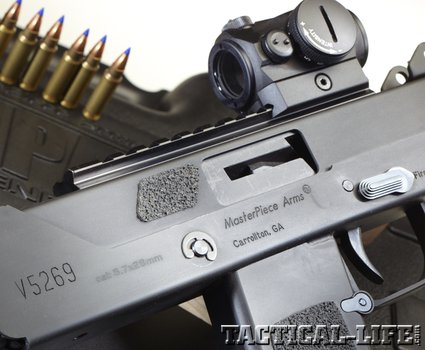 Introduced earlier in 2012, the MPA57 SST 5.7x28mm Pistol definitely shows its heritage. The lines, while somewhat different, remind me of the MPA’s Defender line. The finishes used remained the same—upper and lower receivers receive a black phosphate, while the barrel, muzzle brake, bolt and other internals have black oxide. One of the first things I noticed was the angle of the grip welded to the lower receiver. Defenders have a polymer insert on the grip to provide an ergonomic back-strap. The MPA57 SST does not, and the grip is pretty much straight up.

It is a tad boxy feeling, but balanced nicely in the hand and had nice friction tape panels for enhanced control. I also noticed the equipment rail, requisite side-cocking handle, and a 3-inch long brake on the 5-inch barrel.

The MPA57 SST looks like it is trimmer top to bottom than the standard Defender, imparting a “skinny” look, perhaps accentuated because of the straight grip. The height of the pistol with a magazine inserted is about 6.5 inches, with about 0.5 inches of the magazine and base plate protruding from the grip. Overall length is just shy of 12 inches. The weight of the MPA57 SST (3.8 pounds) is about 0.5 pounds heavier than MPA’s MPA30 9mm pistol, and about 1.5 pounds lighter than their MPA10 .45 ACP version. Essentially, the MPA57 SST appears to compare well dimensionally to a 9mm Defender. 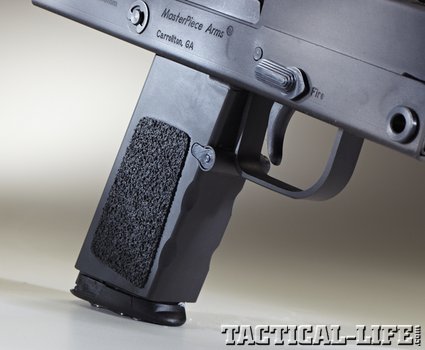 The MPA57 SST’s grips are textured with friction tape panels to increase purchase.

The smooth trigger is inside a gen-erous triggerguard. I was able to reach the grip mounted magazine release easily with my trigger finger without shifting my hand. A rotating safety selector is on the lower receiver’s side above the forward portion of the trig-gerguard. The horizontally grooved safety elector rotates forward for “safe,” rearward for “fire.” Even my average hands could manipulate the safety, but only with concentration.

The cocking handle is on the left side of the upper receiver and is nice sized. It moved smoothly until the recoil spring began to stack. The 20-round polymer magazine is by Pro-Mag, but those for FN’s Five-seveN pistol will also work. 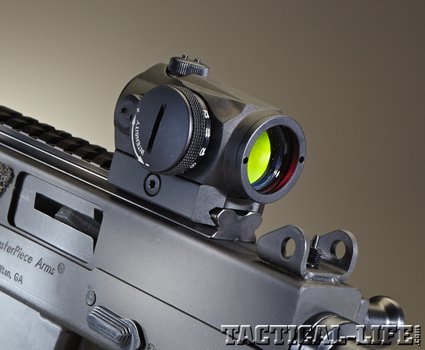 Law enforcement and military end-users have embraced the Aimpoint Micro T-1 2MOA for its size, durability and battery life. 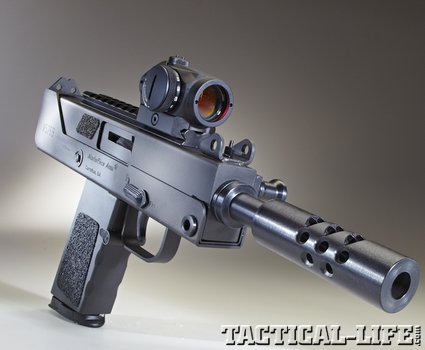 My range trip was actually my first use of a weapon chambered for 5.7x28mm, other than two shots (they ran out of ammunition) at a media gathering years ago. I remembered low recoil and the first shot verified my memory. Recoil of the 5.7x28mm falls nicely just below that of a full-size, steel, 9mm pistol yet above a .22 LR pistol. Double taps were a snap, as the red dot seemed to barely move from the target.

The ammunition on hand had a 40-grain V-Max bullet, FNH’s SS197SR Sporting Cartridge. Its velocity averaged 1,828 feet per second (fps) with an average group size of 0.83 inches. This is especially impressive considering the stagey, gritty long trigger pull that needed 6.75 pounds of pressure to break.

I moved to the 50-yard line for a quick informal test. With a target stapled in place, I tossed a bag on the table and propped across it. Five shots later I loaded everything up and then retrieved my target. The MPA57 SST and the 5.7x28mm round made me look good. Four shots were clustered into 1.63 inches, with the fifth opening the group to 1.79 inches. Not bad at all! 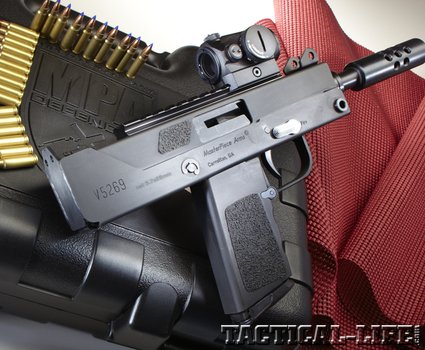 Even though calculations indicate the 9mm and 5.7x28mm to be similar in energy, they differ in other ways. The 5.7x28mm is flatter shooting, which is important if an atypical long distance shot shows its ugly head. For LEO/military folks, who can legally access the AP load, the 5.7x28mm will be superior in defeating ballistic armor.

Of equal importance to both groups is the weight of the MPA57 SST’s rounds. There is a noticeable difference, with the 9mm weighing noticeably more. Lastly, the MPA57 SST holds 20 rounds in its polymer magazine. While there are 9mm pistols that hold quite a few rounds, none equal it, except, of course, MPA’s MPA30 pistol.

It was quite a shooter, and fun to boot. The low recoil should make it pop-ular with those preferring not to deal with rounds packing more thump or just look-ing for a handgun with added benefits. To add to the attraction, MasterPiece Arms has a number of accessories for the MPA57 SST, including a flashlight. MPA’s efforts to modernize the MAC-10 design, culminating in the MPA57 SST Pistol were quite successful. They have made an accurate and reliable pistol that shoots an interesting round capable of taking game and self-defense. If that’s what you are looking for, you’ll do no better than MasterPiece’s MPA57 SST Pistol, Find out more by calling 866-803-0000 or by visiting masterpiecearms.com.