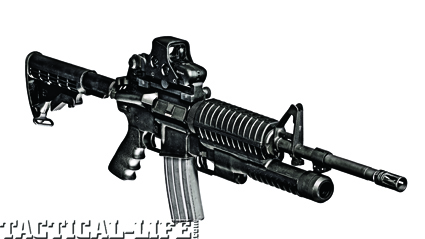 The MAUL resembles the standard M203 40mm grenade launcher when mounted under an M16 or M4 barrel, but it can fire three to five 18mm (12-gauge) explosive rounds in quick succession.

As the art and science of auto­­­­­matic weapons has pro­­­­­­­­gressed over the last century, those on the receiving end find themselves in an increasingly untenable position. The M240 machine gun, in standard use in the U.S. armed forces, can fire up to 950 rounds per minute. That’s nearly 16 .30-caliber bullets every second. If that’s not intimidating enough, consider the Navy’s Phalanx gun designed to defend ships against high-speed missiles, which fires up to 4,500 rounds per minute. Other Gatling guns, mounted on vehicles and aircraft, fire at similar rates and have the capability literally to obliterate all but the hardest targets.

Most of these advanced weapons, however, share a common characteristic with nearly all low-tech firearms produced in the 20th century, utilizing discrete cartridge ammunition that must be fed into the weapon’s receiver and fired in series. The mechanical process of loading and firing can occur with amazing rapidity, but its very nature limits projectile cycling speed and in turns affects accuracy, since weapons tend to move even in the apparently infinitesimal intervals between discharges.

Several innovators have tried to develop weapon systems that do not rely on ammunition, most notably directed energy devices. Unfortunately, the technology needed to create man-portable mechanisms that can generate the amount of energy required quickly to kill or incapacitate large numbers of adversaries if necessary has yet to be developed.

Another approach to hyper-rapid fire involves elimination of cartridges containing a single projectile. This is nothing new; shotgun loads and artillery case shot are centuries old. The key is to blend high accuracy with simultaneous or near-simultaneous discharges that do not create a catastrophic chain of propellant detonations of gunpowder or another inflammable compound. 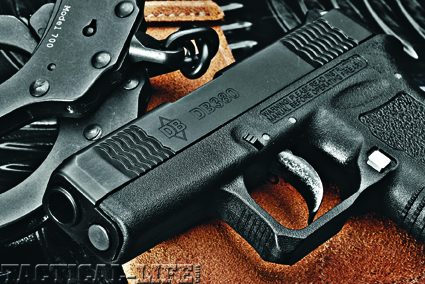