The tactical or sharpshooter rifle continues to be a powerful tool in the law enforcement arsenal. It is not just a force multiplier, but also a tool we can use to eliminate threats from a distance. In all, I do not see it as solely a SWAT weapon anymore, but another tool in our toolbox. Where some agencies balk at the idea of a military-type weapon for its officers, they may welcome the tactical rifle as a more politically correct long-distance option.

Most of the tactical rifles I see are high-end, well-crafted machines. They will put all your rounds into a single hole at 100 yards, as long as the operator is up to the task. These guns have custom barrels, stocks and optics of which most of us working stiffs can only dream. Most, if not all, are built on the venerable Remington 700 or Winchester 70 actions, which are usually the only stock part of the gun, and they can range from $2000 to $4000. Then again, when you’re a big agency and you want the absolute best, you make room for these tools in your budget.

Let’s say you’re a smaller agency, or you’re forced to build the weapon yourself out of your own pocket. Whatever the reason, money quickly becomes an issue when you’re footing the bill.

What do you do? Is it possible to make one of these precision rifles on a budget? The answer is a resounding yes! I recently went through piecing together a tactical rifle, whose final cost came in at about $1200. When you realize this was a weapon I put together over some months, it becomes almost reasonable.

When I started out, I only knew I wanted a tactical rifle in .308. Looking for a weapon out there as a starting point, I browsed everywhere for the better part of a year. Eventually I found a gently used Savage Model 110 Tactical .308 on an online listing, which looked promising. It was a left-hand model, which made it even sweeter, since I am a southpaw. So, after some appropriate paperwork and fees, I was the proud owner of my starting point rifle. 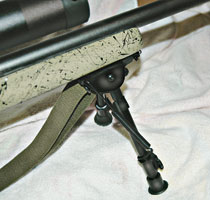 The usual rule is that you get what you pay for. If you pay $700 to $1000 for a tactical rifle as a starting point, it’s usually a good bargain. Then, people get into custom barrels and so on, and the price moves somewhere into the mid-to-upper stratosphere.

Apparently, Savage has broken the rules as far as price to quality ratio. Their tactical rifles are every bit as good out of the box as their counterparts. The barrel mounting or head spacing methods allow for outstanding accuracy without making it pricey.

Your rifle should achieve sub-MOA accuracy. My Savage groups at about 0.75 of an inch to even a 0.50 of an inch group at 100 yards, so it’s definitely in the ballpark. The rifling is clean and has no rough spots to collect copper. Now I had the rifle, what next?

Everyone knows that a rifle is only as good as the combination of the action, barrel and optics working together. If the first two are great but your optics aren’t so great, then it’s not worth much. It’s just an expensive hunting-grade rifle at best. So do you still need to fork out $800 to $1000 on a scope? Thankfully, the answer is no.

I started looking for something in my price range. Enter the “Super Sniper” scope. The scope I used was made by Tasco and the sole distributor is SWFA. In fact, SWFA’s Super Sniper won a contract from the US Navy as a scope for their forces, something proudly bragged about. For a new list price of $299, the scope was in my target price range, so off I went. With the scope, lens shade extension, Butler Creek flip-up lens caps and delivery, I was out just a little over $350.

The 10x scope has a mil-dot reticle, a 30mm tube for better light transmission and large turret knobs for adjustment that will work well even with gloved hands. Overall, the sight picture is clear and near perfect for shots out to at least 300 yards. That’s as far as I have been able to test it. It should perform admirably out much farther; I just don’t have the facilities to prove it.

To mount the scope, I went to Brownells and picked up a Warne tactical base and a pair of the Night Force tactical rings, which added up to a little over $200. I was almost done.

While the Savage stock is pillar bedded and very utilitarian, I wanted something with a little more weight, rigidity and strength. So I searched and searched and searched. Finding a tactical stock for a left-handed Savage was frustrating, until I stumbled upon Sharps Shooter’s Supply. They produce quite a selection of accessories for Savage rifles. A search of their website provided me with several stock styles, and being a cheapskate, I found a tactical stock, unfinished, listed for $160. The staff there was extremely helpful; they spent a lot of time with me over the phone as we looked for the stock and picked out options, such as a second sling swivel. They answered all my questions, especially on how to finish the stock, which they also send with a handy set of directions. A little Dremel work to free-float the barrel, general sanding and a good painting with Rustoleum gave me a stock I am now proud of. Plus, it’s rock solid to boot.

Finally, I needed a bipod and found a Shooter’s Ridge online at a reasonable price. This completed my purchasing and pretty much maxed out my budget. If you really want to go with something like a Harris bipod, these are excellent systems, but cost about double what I paid.

If I plan to use this as a tactical rifle, the one place I don’t skimp is on ammunition. Ammunition is as crucial to accuracy as all the parts of a rifle combined. If you don’t take care to pick the right ammunition then accuracy will always be lackluster. A sloppy ammo maker can have inconsistent powder loads; their cases may not be sized consistently, or some part of their production run will have an element of inconsistency that will keep a good grouping elusive, despite all your best efforts. 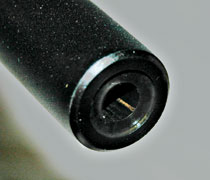 As a result, I chose to go with the Federal Gold Medal Match 168-grain round. It has consistently given me outstanding results. Other loads you may consider could be the Hornady TAP loads or some other match load. Test your ammunition, research it, and pick carefully if this is for a working tactical weapon in the field. An inappropriate choice can prove disastrous in the wrong situation.

Rifle and ammo in hand, I was off to the range. After the first set of rounds to sight the gun, I was able to produce sub-MOA groups consistently. The weapon is definitely up to the task of making the shot.

I later moved the target out to the 200- and 300-yard line. I was right on target with 20 clicks up on the elevation knob. However, my range day was spoiled by 30-mph crosswinds with 40-mph gusts that killed any chance of a true gauge of the rifle’s accuracy. Still I managed a 3-inch group at 300 yards, despite the wind.

My scope was back at zero 20 clicks down and still gave me sub-MOA groups. The best part was not needing to re-zero the gun again.

Final Notes
This is a truly outstanding weapon out of the box and, despite my humble efforts, it shoots even better now. It will consistently be sub-MOA, with the right load.

If you want a tack driver, but get discouraged by the price, look for a Savage out there. This process was easy and definitely user friendly. 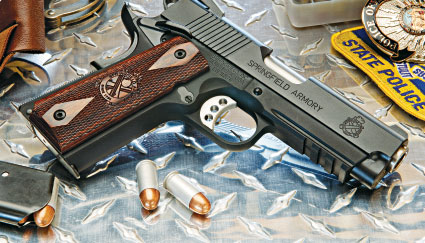