0
SHARES
1
VIEWS
Share on FacebookShare on Twitter
By handloading your own ammo, you can change both the external and terminal ballistics of your cartridge.

Rifle shooters handload ammunition for different reasons. It could be to save money or just because it’s fun. It’s more likely that they’re looking to improve either their external or terminal ballistics, or maybe even both. External ballistics deal with everything that happens between the muzzle and target. Terminal ballistics is associated with the bullet and the target after impact.

When I wrote the book Rifle Bullets for Hunters, I broke down the terminal performance of bullets into three categories: fragmenting, expanding and penetrating. These categories are based on the condition of the recovered bullet and depend on the bullet’s retained weight and expanded diameter. With this method, a bullet’s terminal performance classification is represented by a number from 1 to 100. You must have a recovered bullet from an animal or some sort of testing medium like ordnance gelatin, wet or dry paper, or even water to establish which category a bullet is in. First, determine the bullet’s expansion factor by dividing the expanded diameter by the unfired diameter and then divide the percentage of the weight the bullet retained by the quotient of the first calculation.

For example, the formula would look like this: RW% / (RD/UD) where “RW%” equals the retained weight percentage, “RD” equals the recovered diameter and “UD” equals the unfired diameter. For a 150-grain .308-caliber Barnes Triple-Shock, which expands to 0.616 inches in diameter and retains 100 percent of its weight, the calculation would look like this: 100/(616/308) = 50. The 50 places this particular Barnes Triple-Shock bullet dead in the middle of the Bullet Behavior Classification system as a balanced, expanding bullet.

Understanding the various classifications of terminal bullet performance is critical when it comes to selecting the proper bullet for the task at hand. Why? Because you need to select a bullet that will deliver the best terminal performance based on the velocity at which it will impact the animal you intend to shoot and the type of shot angle you are willing to take. The cartridge you’re using also comes into play because that will determine the velocity at which the bullet will be launched. It gets a bit more complicated because external ballistics will determine the ability of the bullet to retain velocity as it travels toward your target.

Maybe the best way to demonstrate this is to look at the hunting I did in 2010 with the .30 Remington AR cartridge. I used that cartridge to take a pronghorn, mule deer, whitetail and black bear, and I tried to use bullets that offered the best external and terminal ballistics based on what and where I was hunting.

PRAIRIE POWER: The first hunt was in Wyoming for pronghorn. I wanted a flat-shooting bullet for long shots. I went with a 110-grain Barnes Tipped Triple-Shock at 3,010 FPS (feet per second). Sighted in 2.5 inches high at 100 yards, I could hold dead-on out to 300 yards. At 350 yards, I’d need to hold on the antelope’s back, and at 400 yards, 8 inches above the back or a half-a-chest high. The shot came at 407 yards and the hit was good, but I’d not considered the terminal performance of the bullet at that range and velocity.
Barnes Tipped Triple-Shock bullets need to impact in excess of 2,000 FPS to show any meaningful expansion. At 407 yards, my bullet impacted the antelope buck at something shy of 1,900 FPS. The buck dropped but regained his feet before we reached him and a finishing shot was required. This was not bullet failure—it was hunter/handloader failure. I asked the bullet to do something outside its design parameter.

TEXAS COMBO: The next hunt was a combination whitetail/mule deer hunt in West Texas. Again, I expected the ranges to be long, but I was not going to make the same mistake. I chose a 125-grain Remington AccuTip bullet handloaded to 2,800 FPS. Ironically, due to this bullet’s high ballistic coefficient, it only dropped an additional 1.5 inches with the same zero used for the Tipped Triple-Shock load. This bullet worked great on both deer, which were taken inside 100 yards.

BEAR MEDICINE: My last hunt was at home in West Virginia for deer and black bear. I wanted a bullet with violent expansion similar to the AccuTip for deer, but I also wanted a bullet tough enough to poke through a black bear’s shoulder, where I like to shoot them. I chose a 150-grain Nosler AccuBond loaded to 2,550 FPS. I’ve seen this bullet work when fired from a .308 Winchester out to 300 yards. With the .30 Remington AR I could achieve .308 Winchester, 300-yard impact velocities at 200 yards and did not expect to shoot any further.

I shot my black bear through the shoulders at 130 yards and the 150-grain AccuBond broke the femur, drove through both lungs and out the other side. The 230-pound bruin dropped in his tracks and rolled to the bottom of the hill. 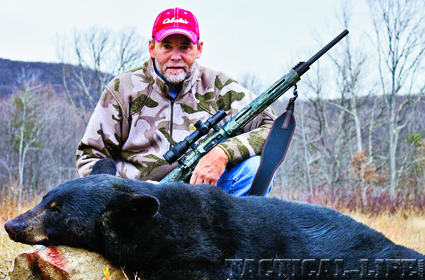 You can use the same bullet for various species of big game by choosing a bullet that is tough but will also expand widely and damage a lot of internal tissue.

Here’s the thing: It’s tempting to handload ammunition that will shoot the fastest and flattest for your rifle/cartridge combination. But, you must keep terminal performance in mind. I chose a flat-shooting load for my antelope hunt but would have been better off with the slightly slower-moving AccuTip, which would have expanded at velocities much less than the Triple-Shock.

Ballistic programs will let you compute the external ballistics of your cartridge/bullet combination. There is, however, no resource to predict a bullet’s terminal performance. The easiest solution is to contact manufacturers and discuss the minimum expansion velocity, weight retention and expansion of the bullets they offer. This can help you match the bullet’s performance to the game and the conditions you will be hunting in.

The best solution is to conduct some testing on your own to actually determine a bullet’s behavior classification. You can use ordnance gelatin to do this, but it’s expensive and problematic to work with. Wet phonebooks, on the other hand, are free. And they’ll allow you to classify the terminal performance of your bullet. You can also create reduced-velocity handloads to simulate shots at longer distances.

What type of terminal performance do you need for a particular animal? This is and always will be debatable, but as a general guide, you’ll need 6 to 8 inches of penetration in wet phonebooks for deer, bear and large hogs. Eight to 10 inches would be advisable for elk. Double these penetration depths if using 10 percent ordnance gelatin. Additionally, the more weight a bullet loses, the more tissue it will damage. So, when comparing two bullets that penetrate to near the same depth, keep that in mind.

When you find a bullet that offers the external and terminal ballistics you desire, remember: accuracy enters into the equation, too. No matter how well a bullet flies or kills, if you can’t hit them, you’ll not be eating them or hanging their heads on your wall.