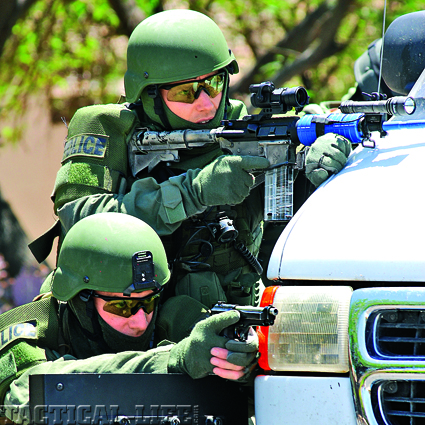 Some economists say that the U.S. is currently in the grip of the worst economic crisis since The Great Depression. Few occupations have been hit harder than law enforcement.

Training without live ammo can still be highly useful, helping officers work on coordination and movement in realistic tactical settings.

Local police departments have been completely disbanded due to funding crises, with communities hoping that the local sheriff’s office can take up the slack. There have been massive layoffs in department after department—local,county and even state. We are seeing hiring freezes in departments where there is no money to hire people to replace retiring officers, resulting in a severe shortage of sworn personnel working the street. In an economic atmosphere where all this is happening, can anyone be surprised that training budgets have suffered?

What Trainers Can Do

On the firearms training side, many departments have had to make do with less ammunition. One solution for that is to change the training curriculum slightly to include more dry-fire practice. Drawing the pistol. Magazine exchanges. Movement patterns that include scanning for additional threats and getting to cover. Wounded-officer gun manipulation and return-fire techniques. And simply pressing the trigger of an empty gun at a safe backstop, under the watchful, diagnostic eye of a skilled instructor. These can all be effectively experienced without firing a shot, and some techniques are actually safer to practice with unloaded guns.

Reduced round-count courses are another option. Set up a challenging scenario course. Let’s say an officer has to bail from his patrol car, fire two shots at a target, run to another cover point and engage that with two hits, too. Throw in some cornering, some “pie cutting,” and some shoot/don’t shoot judgment targets. Horizontal cover, vertical cover, strong hand only and weak hand only. A speed reload here, and a tactical reload there. In as little as 18 rounds, the officer has refreshed and proven his skills—more than at many 60-shot qualification courses. And he has done so in a course that cuts costly ammunition consumption by more than two-thirds.

If such a course is implemented, the instructor has to take into account the time involved. In a huge department such as the NYPD, with a count of sworn officers in the mid-30,000 range, it would take forever to run each officer one at a time through a live-fire scenario. A department with 10, 20 or 50 sworn personnel would have more leeway with that. From a budgetary point of view, the salaries of the officers being trained, and their time spent on the firing line, constitute a huge part of the costs involved in firearms training.

Some years ago in New England, a small-town police instructor came up with a novel idea. The state’s Police Officer Standards and Training (POST) Council allowed departments to craft their own qualification courses so long as they were submitted for approval. The innovative instructor in question developed a one-shot course of fire.

Consider this Case One. It worked like this: The officer, while on patrol in full uniform, would be dispatched to the range in his department vehicle. When he arrived, the instructor provided ear and eye protection and gave a quick briefing. Then, on signal, the officer had to exit his vehicle, take cover, and nail one steel target—placed in such a way as to create a challenging “marksmanship problem”—downrange. The officer would then reload, sign his paperwork and return to duty. 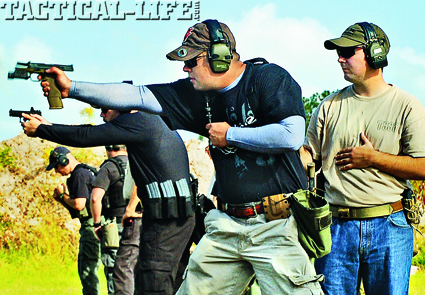 Set up challenging, low-round-count courses of fire to train more skills at once. This is a cost-effective measure for smaller agencies.

I knew several officers of that department. Without exception, every one of them told me it was the most stressful qualification they’d ever shot, and one of the most instructive in terms of showing them their own ability to use their service pistol when least expected. Not all of them hit the target with their first round, but for many it literally was a one-shot qualification. And from the bookkeeping side, of course, those responsible for the budget were delighted with the tally of ammunition expenditure.

Sometimes, training time can be folded into patrol time. It may require meticulous scheduling, but if the department has enough instructors, those trainers (or a Field Training Officer approved for the task) can spend one-on-one time with officers during the latter’s regular patrol tours, and work in training during slow periods and down times. While it would probably not be feasible for the largest departments, small departments have found it useful.

Because the individual trainee (and theoretically at least, his instructor) are on duty and on patrol, and subject to calls for service at a moment’s notice, particular care has to be taken in regard to safety. If any of the training involves firearms, it is imperative that the instructor has all necessary safety equipment with him or her during this assignment. That equipment should not only include dummy guns, but some container in which all live firearms can be secured yet quickly accessed if there is an emergency call for service.

When that protocol has not been followed, terribly painful lessons have been learned. In Case Two, a city police sergeant who was a highly competent firearms instructor responded with members of his patrol platoon to a business site that had been found unlocked. After clearing the building for real, since it was otherwise a slow night for service calls, he had his shift patrol officers unload their SIG P229s for some impromptu building search training. All went well until the session was complete and everyone carefully “reloaded for the street.” Then, one officer said something like, “Show me that one particular maneuver again.”

Another incident came to a much sadder end. In Case Three, The FTO decided to role-play traffic stops with his trainee. Both were carrying 9mm pistols, but the FTO did not realize that his trainee’s pistol did not have a magazine disconnector safety that made it impossible to fire with a chambered round if the magazine was removed, like the FTO’s own pistol at the scene with which he was more familiar. So, perhaps for expedience, only the magazines were removed. 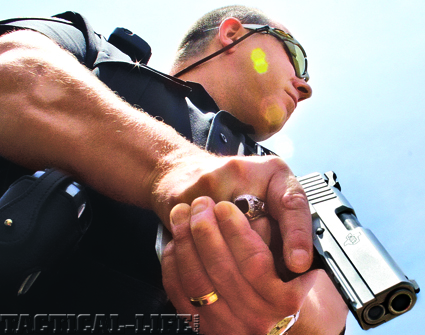 You guessed it again: A live round was fired. But this time it hit a part of a policeman’s body that was not protected by body armor. The result was a tragic and lasting lesson. Such training must be done, not merely with “unloaded” guns, but with training simulation guns that cannot be discharged under any circumstances.

When time is tight and someone upstairs determines that dedicated training time must be cut, one option is for instructors and supervisors to assign their personnel to view webinars and webcasts dedicated to the topic the department feels needs to be covered. It is a perfect way to more efficiently utilize the time an officer is already being paid for when he or she is working a slow shift. Just make sure that each officer has a wide window of time in which to accomplish the assigned viewing.

This training time obviously has to be documented. This can be accomplished by the officer signing a log to that effect. Or the department and the instructor can simply test the officer on the content of the training webinar. The webinar providers may have their own written exam on that particular module, which can be downloaded. If that is not the case, the instructor who has already reviewed the webinar segment can create his own exam for it and collect, correct, and file it appropriately.

Though firearms and use-of-force training are imperative to officer survival and public safety, it is one of the first areas to feel the budget-slashing knife in times of economic distress. Budget shortcuts are obviously not the ideal, but ingenuity on the part of the training staff and the command staff can go far to fill the gap. 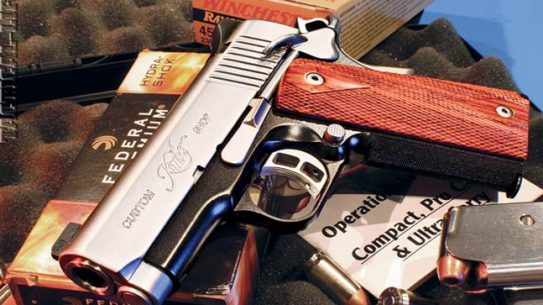