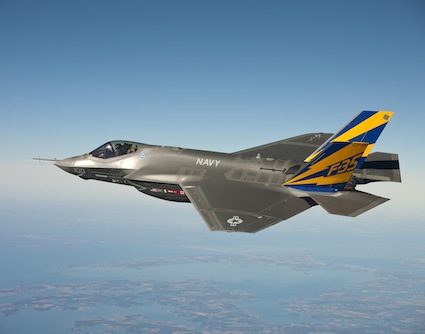 The U.S. Navy variant of the F-35 Joint Strike Fighter aircraft, the F-35C, conducts a test flight over the Chesapeake Bay near Naval Air Station Patuxent River in Maryland Feb. 11, 2011. Lt. Cmdr. Eric “Magic” Buus flew the F-35C for two hours, checking instruments that will measure structural loads on the airframe during flight maneuvers. The F-35C is distinct from the F-35A and F-35B variants with larger wing surfaces and reinforced landing gear for greater control when operating in the demanding carrier take-off and landing environment. (U.S. Navy photo by Lockheed Martin Corp./Released)

McCain, the top Republican on the Senate Armed Services Committee, referred to the program as “incredibly troubled” and a “train wreck.” He said Lockheed has done an “abysmal job” at containing cost overruns and urged that the company absorb at least some of them. ‘

China calls on U.S. to cease weapon sales to Taiwan.