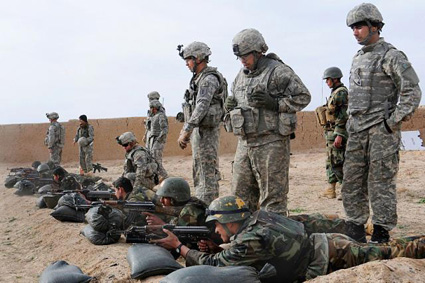 WASHINGTON (Dec. 9, 2009) — The training of tens of thousands of additional, capable Afghan soldiers and police is among the crucial tasks necessary to achieving success in Afghanistan, the commander of U.S. and international forces in Afghanistan told Capitol Hill legislators here today.

“To pursue our core goal of defeating al-Qaida and preventing their return to Afghanistan, we must disrupt and degrade the Taliban’s capacity, deny their access to the Afghan population and strengthen the Afghan security forces,” Gen. Stanley A. McChrystal told members of the Senate Armed Services Committee.

This strategy, he said, requires reversing the current momentum of the Taliban, while creating “the time and space to develop Afghan security and governance capacity.”

Many of the 30,000 U.S. forces deployed to Afghanistan in coming months will be employed to combat the Taliban, McChrystal said, while others will assist NATO troops in training up new Afghan soldiers and police.

“We need to significantly increase the Afghan national security forces,” he said.

The surge of U.S. forces to Afghanistan will result in a total of about 100,000 troops in country by the end of summer. About 68,000 U.S. troops are now in Afghanistan.

President Barack Obama’s revised Afghanistan strategy calls for July 2011 as the start date of a thinning out of U.S. forces in Afghanistan.

That date, McChrystal said, serves as “a positive forcing function on our Afghan partners, in reminding them that although we have a long-term commitment, we also have shared responsibility” for maintaining security.

“We are flowing, everything we can build in the Afghan army, into that area,” he said.

And, by July 2011, he said, there should be about 300,000 Afghan security forces divided between soldiers and police.

Afghan President Hamid Karzai recognizes the importance of bolstering his country’s security forces as well as refining his country’s strategic partnership with the United States, said U.S. Ambassador to Iraq Karl W. Eikenberry, who accompanied McChrystal at the Senate hearing.

A strategic partnership with Afghanistan, Eikenberry explained, would, among other things, be reflective and cognizant of Afghanistan’s long-term security needs.