President Barack Obama sacked his loose-lipped Afghanistan commander Wednesday, a seismic shift for the military order in wartime, and chose the familiar, admired — and tightly disciplined — Gen. David Petraeus to replace him. Petraeus, architect of the Iraq war turnaround, was once again to take hands-on leadership of a troubled war effort.

Obama said bluntly that Gen. Stanley McChrystal’s scornful remarks about administration officials represent conduct that “undermines the civilian control of the military that is at the core of our democratic system.”

He fired the commander after summoning him from Afghanistan for a face to face meeting in the Oval Office and named Petraeus, the Central Command chief who was McChrystal’s direct boss, to step in. Obama had offered the job to Petraeus during a private White House meeting earlier Wednesday, said a senior military official.

In a statement expressing praise for McChrystal yet certainty he had to go, Obama said he did not make the decision over any disagreement in policy or “out of any sense of personal insult.” Flanked by Vice President Joe Biden, Defense Secretary Robert Gates and Adm. Mike Mullen, chairman of the Joint Chiefs of Staff, in the Rose Garden, he said: “War is bigger than any one man or woman, whether a private, a general, or a president.”

He urged the Senate to confirm Petraeus swiftly and emphasized the Afghanistan strategy he announced in December was not shifting with McChrystal’s departure.

Indeed, as Obama was speaking, McChrystal released a statement saying that he resigned out of “a desire to see the mission succeed.”
“I strongly support the president’s strategy in Afghanistan,” McChrystal said.

Obama hit several grace notes about McChrystal and his service after their Oval Office meeting, saying that he made the decision to sack him “with considerable regret.” And yet, he said the job in Afghanistan cannot be done now under McChrystal’s leadership, asserting that the critical remarks from the general and his inner circle in the Rolling Stone magazine article displayed conduct that doesn’t live up to the standards for a command-level officer.

“I welcome debate among my team, but I won’t tolerate division,” Obama said. 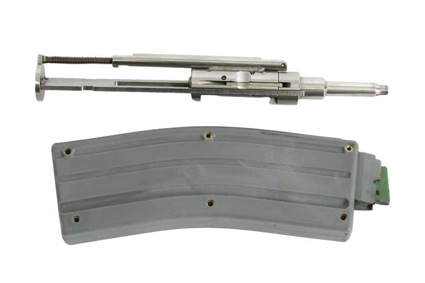