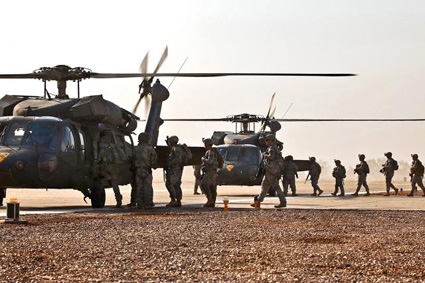 WASHINGTON– The way ahead in Iraq and Afghanistan will be tough, but America’s Soldiers can handle it, said Secretary of the Army John McHugh.

During the Oct. 5 opening of the Association of the United States Army 2009 Annual Meeting, which runs through Oct. 7 in Washington, D.C., the new Army secretary spoke to an auditorium of thousands of Soldiers, saying he believes they can meet the challenges that face them.

“The days ahead are of great challenge,” he said. “But I can tell you this as well: failure is not an option. We will, we can, we must succeed, and as more than 230 years of the history of this great U.S. Army has shown you, the men and women who put that uniform on will be equal to this challenge as long as we stand by them.”

McHugh then introduced the event’s keynote speaker, Secretary of Defense Robert M. Gates. The defense secretary spoke about what DoD is doing for Soldiers, what it needs to do in the future, and where the Army needs to go in the future.

First, he spoke about the wars in Iraq and Afghanistan, mentioning first the recent changes in Iraq, where responsibility for security in cities was handed over to host nation forces.

“That was a significant step,” Gates said, saying that the U.S. will continue to reduce its presence leading up to elections next year — as it shifts to an advisory role.

The secretary also noted successes in Iraq, notably the reduction of violence there.

“General Odierno said last week violence is down 85 percent over the past two years, an accomplishment made possible by the hard work and sacrifices of many thousands of Soldiers,” Gates said.

At the same time, Gates said, Afghanistan has been on a “different and worrisome trajectory,” with violence up 60 percent from last year. The secretary said he believes the changes President Obama makes regarding Afghanistan will be some of the most “important of his presidency.”

He also said that as the military considers the future, he is prepared to continue to get Soldiers what they need.

“IEDs remain the number one cause of casualties in Afghanistan,” Gates said. “Let there be no doubt, as long as our troops are in harm’s way, the DoD will do everything it can to destroy the IED networks and protect those heroes in the fight.”

To that end, Gates said he’s sent additional intelligence, surveillance and reconnaissance capabilities to Afghanistan, including advanced drones and new platforms, such as the MC-12. Additionally, he said, more explosive ordnance disposal teams are on their way to Afghanistan, and MRAPs designed for Afghanistan were delivered to theater last week.

“In the next year we will field thousands of these lifesaving vehicles,” Gates said.

The secretary said that the Army has surpassed its recruiting goal, but that he has authorized additional force strength, temporarily, for an increase of some 22,000 Soldiers to get though the current “high demand period.” He said the new Soldiers will not add additional force structure, but will fill out units the Army already has.

“The goal is to end stop-loss and increase dwell time,” he said.

In recent history, Gates said, the Army has seen new concepts in theater. In particular, he said, there’s the “Advise and Assist Brigade,” whose functions include a traditional strike role, as well as an advisory role, and command and control.

“By the end of next year we plan for the Iraq mission to be composed almost entirely of AABs, and the expectation is that sometime down the road the same will be true in Afghanistan,” he said.

The secretary also said he noticed a shift in the kinds of military leaders in theater — those that now must play multiple roles outside traditional military roles.

“They are playing the roles of warrior, diplomat, mayor, economist, city engineer, and tribal liaison — often at the same time,” Gates said. “(We) must ensure that that kind of mental agility, entrepreneurial spirit and independent judgment required to be effective downrange, carries over to future assignments.”

The secretary said those Soldiers must be allowed to play a role in the larger Army to prepare it for wars of the future.

During his address, the secretary also mentioned changes to the GI Bill, efforts to curb suicide, continued efforts to help those Soldiers who have been injured in combat, and his commitment to the ground combat vehicle program.

Prior to remarks by the secretary of Defense and the secretary of the Army, the AUSA 2009 opening ceremony featured a presentation of the colors by the 3rd U.S. Infantry (the Old Guard), and an invocation by the chaplain from the Military District of Washington.

The event also featured a multi-media and live-action presentation of the history of the noncommissioned officer, beginning with the role of the NCO in the Revolutionary War. The historical presentation featured Soldiers from the Old Guard and was part of recognition of the Year of the Noncommissioned Officer, which kicked off at last year’s AUSA conference.
Bookmark & Share 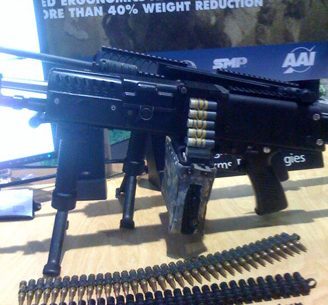 WASHINGTON-- The way ahead in Iraq and Afghanistan will be tough, but America's Soldiers…