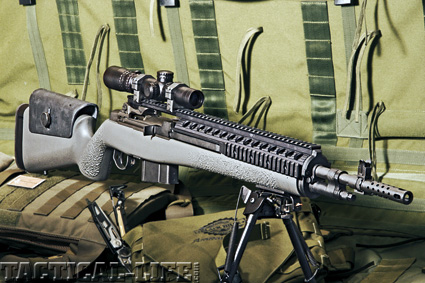 The McMillan stock and Troy M14 Modular Battle Rail sporting a Nightforce 2.5-10×24 scope transform the M1A Squad Scout into a modern rifle ready for use against threats hiding behind barriers or at ranges beyond those where the AR-15 is effective.

Some shooters have a spiritual attachment to the M14, the battle rifle that followed the M1 Garand and had a short-lived run as the U.S. infantry’s small arm. It was replaced by the M16 to the dismay of many and the delight of others, but even some of those who eschewed the M14 and its 7.62mm round have now recognized their value because of the battle needs in Afghanistan, where killing power at longer distances is often needed to defeat the enemy. Consequently, the military has dusted off many old armory M14s and pressed them into service once again. 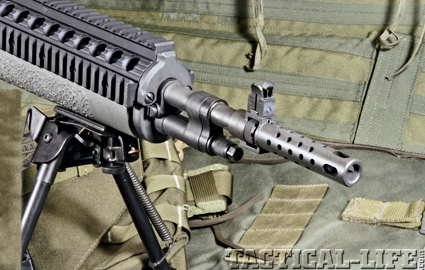 Often law enforcement is influenced by small arms trends in the military and it would not be surprising to see certain agencies express interest in fielding the M14 or the civilian equivalent M1A for special applications. The threat of a terrorist attack is ever-present and could involve targets hiding behind barriers or at longer ranges where the power and reach of the 7.62mm cartridge has an advantage over the M16’s smaller 5.56mm round. In those cases, a weapon that has more power to penetrate vehicles or cover, is effective at 800 yards or more, can fire semi-automatic and handles well in enclosed areas under close combat conditions could be a very valuable addition to the law enforcement arsenal. 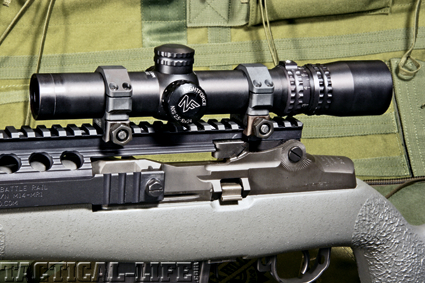 The McMillan M3A was equipped with a Nightforce NXS 2.5-10x24mm scope, but the rail will accept about any aiming device. Note that the rail eliminates the rear aperture sight that is standard on M1As.

There is no doubt that the M14 is dated, at least in its ability to serve as a platform for accessories such as optics, laser aiming devices and illumination tools. There just isn’t any place to mount them. When the receiver was designed so many years ago, the average infantryman for whom the gun was created used iron sights, and no consideration was given to supplying him with an optic. Such devices were reserved for snipers, who of course used bolt actions. Therefore, little or no thought was given to building a receiver that could readily accept a scope. 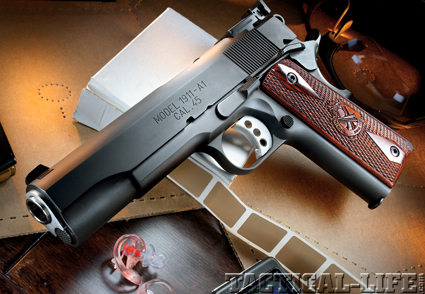