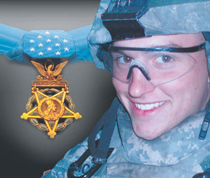 FORT BENNING, Ga. — Medal of Honor recipient Spc. Ross McGinnis, who was killed Dec. 4, 2006, in Iraq, when he covered a grenade with his body to save the lives of four others, will be honored at a ceremony at 5 p.m. June 12 at the National Infantry Museum here.

McGinnis, posthumously promoted to specialist, will be the first infantryman honored with a plaque on the outside wall of the museum, to be unveiled at the ceremony.

Guests will include McGinnis’ family, friends and members of his unit.

“Fort Benning’s commanding general wanted to ensure this young infantry Soldier is properly honored and remembered by the infantry branch for his service to this nation,” said Frank Hanner, director of the museum division.

A private first class assigned to 1st Platoon, C Company, 1st Battalion, 26th Infantry Regiment, 2nd Brigade, 1st Infantry Division, McGinnis was providing rear security with an M-2, .50-caliber machine gun in the turret of a humvee during a combat patrol in the Adhamiyah neighborhood of northeast Baghdad. When an insurgent threw a grenade into the hatch, he threw himself onto the grenade, pinning it against his body and absorbing the blast, rather than jumping out of the hatch to escape. He is credited with saving the lives of Sgt. 1st Class Cedric Thomas, Staff Sgt. Ian Newland, Sgt. Lyle Buehler and Pfc. Sean Lawson.

“The lives of four men who were his Army brothers outweighed the value of his one life,” said McGinnis’ parents, Tom and Romayne, in a statement shortly after his death. “It didn’t matter to Ross that he could have escaped the situation without a scratch. Nobody would have questioned such a reflex reaction. What mattered to him were the four men placed in his care on a moment’s notice. One moment he was responsible for defending the rear of the convoy from enemy fire; the next moment he held the lives of four of his friends in his hands. The choice for Ross was simple, but simple does not mean easy. His answer to a simple but difficult choice should stand as a shining example for the rest of us.”

McGinnis, a Knox, Penn., native, enlisted in the Army’s delayed entry program June 14, 2004, his 17th birthday. He graduated from Keystone Junior-Senior High School in 2005 and completed initial entry training at Fort Benning with the 1st Battalion, 19th Infantry Regiment. He was later assigned to 1st Bn., 26th Inf. Regt., in Schweinfurt, Germany and deployed to Operation Iraqi Freedom in July 2006.

“The day will come when the mission he served has been completed and the fighting is over, and freedom and security have prevailed,” Bush said. “America will never forget those who came forward to bear the battle. America will always honor the name of this brave Soldier who gave all for his country, and was taken to rest at age 19.”

A cake-cutting ceremony will celebrate the Army’s Birthday after the plaque’s unveiling.

SWAT TALK: After The Entry