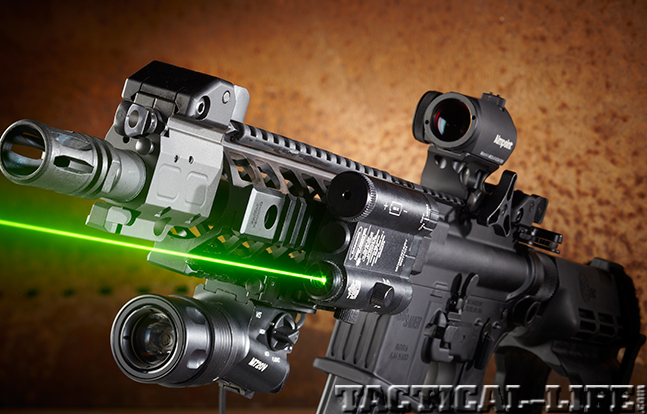 Once a curiosity, the hybrid species known as the megapistol is becoming something of a staple in the collections of serious firearms enthusiasts. And it’s no wonder: Big, accurate and powerful, megapistols offer everyday handgunners SBR-style handling and firepower without the requisite hassle of one’s having to acquire a Class 3 ATF license.

While perhaps not as “practical” as a standard-sized pistol, especially if the idea is to carry concealed, a megapistol is unquestionably a serious home defender (if you like .45 ACP combat round, try .223 Remington). And with Sig Sauer’s introduction of the SB15 Pistol Brace, megapistols are no longer quite so cumbersome to handle.

No, don’t ditch your standard-sized handgun; but, do consider giving at least one of the seven super-cool megapistol options outlined ahead a serious look. Because, whatever else a megapistol might be, it is, without a doubt, a fun kind of gun to shoot.

The CzechPoint SA Vz. 58 looks a great deal like an AK-47, but a look under the hood reveals important differences. Never wholly in agreement with their Moscow overlords, the Czechs took several liberties when designing and manufacturing their version of the Warsaw Pact’s standard-issue battle rifle, installing a two-piece gas piston/bolt carrier group whose bolt locks into battery via a camming block (rather than an AK’s locking lugs), and swapping out the AK’s hammer-and-firing-pin fire-control system with a striker. The result was a gun not necessarily more efficient or reliable than an AK-47 (which is perhaps the most reliable rifle ever designed), but one with a distinctly nationalized stamp. It was a beacon of independent thinking in a grim, totalitarian world.

With the SA Vz. 58 5.56mm, CzechPoint offers shooters a near exact facsimile of the Czechoslovakian battle, save for the fact that it’s chambered in 5.56mm (rather than 7.62mm), is semi-automatic, has a 12-inch barrel (rather than 16) and is shorn of a buttstock. Offering users 30+1 rounds of rifle-caliber firepower in pistol configuration, the SA Vz. 58, Combat Handguns reviewer Doug Larson writes, “is much easier to carry than a rifle or carbine, has more firepower than a pistol-caliber handgun and is more maneuverable than a long gun.”

It’s also highly accurate, delivering in Larson’s hands groups measuring 0.43 inches center to center from 25 yards. And like its AK-based forebears, it’s highly reliable; it never once failed to feed during the entirety of Larson’s several-hundred-round range test. For more on the CzechPoint SA Vz. 58, please visit CzechPoint-usa.com.

Long known for its compact pistols, Diamondback has recently entered the full-size market, releasing the DB FS Nine, a striker-fired 9mm, and, fullest of all, the DB15 Pistol, a 5.56mm-chambered megapistol measuring 23 inches end to end. Designed in the AR-15 mold, the DB15 features standard AR controls, located in the expected places, an aluminum modified four-rail handguard, forged aircraft-grade alyminum receivers, A2-style pistol grip, and a 30+1 5.56mm payload. Picatinny rail along the upper receiver, and on the top and bottom of the handguard offer users plenty of space for the attachment of lights and/or lasers. Meanwhile the DB15’s ferociously edged flash suppressor, apt for glass breaking, gives the gun a great look. For more information on the Diamondback DB15 5.56mm, please visit DiamondbackFirearms.com or call 877-997-6774.

Anyone’s who’s had the slightest exposure to American popular culture is surely familiar with the MAC-10. It’s the compact, Uzi-derivative submachine gun utilized throughout modern movie and TV history by a cast of characters ranging from combat heroes to underworld villains. Though Ingram, the original maker of the MAC-10, long ago went out of business, shooters have ample opportunity to reenact (safely, on the range, of course) their favorite big-screen scenes, thanks to MasterPiece Arms, whose MPA930 9mm is a solid, semi-auto facsimile of the original MAC.

Unlike most “megapistols,” the MPA930 is fairly compact. It measures 7.88 inches overall. It also features a 3.5-inch barrel (which is threaded to accept a suppressor-esque barrel compensator). Small, it nevertheless boasts an outsized amount of firepower, coming equipped with a 30-round polymer magazine. For more information on the Masterpiece Arms MPA930 9mm, please visit MasterpieceArms.com or call 770-832-9430.

The argument over the superiority of direct gas impingement versus piston-driven operation, or vice versa, is longstanding; and we have no wish to rehash it here. We merely venture to note that, in an AR pistol, where barrels are usually shorter than 10 inches, and where acquiring the correct degree of gas pressure can be tricky, a piston system may be preferred, at least in respect to reliability. It’s a hypothesis well borne out by Primary Weapon Systems’s MK107, a no-nonsense megapistol based on PWS’s MK107 Diablo, it’s ultra-reliable, 7.75-inch-barreled, piston-driven SBR. Chambered in .223 Wylde, the MK107 pistol shoots reliably, accurately and with minimal recoil.

“This,” wrote reviewer David Bahde in the August, 2013, issue of Combat Handguns, “is another place where the PWS piston system shines. Expecting recoil to be rather harsh, it simply wasn’t … I could shoot the MK107 pistol all day without issue.” As indeed Bahde did, testing the MK107 at 25, 50, 100 and 200 yards and taking it through the shoot house, bringing it’s .223 payload to bear on a variety of CQB targets. For more information on the Primary Weapons Systems MK107 .223 Wylde, please visit PrimaryWeapons.com or call 208-344-5217.

Like the aforementioned Diamondback DB15 and PWS MK107, the Rock River Arms LAR-15 A4 is a true AR pistol, featuring standard AR-style controls and mechanics, lack of a buttstock aside. Available with either a 10.5- or 7-inch barrel, the A4 has an upper and lower receiver manufactured from black hardcoat anodized 7075-T6 aluminum, T-marked Picatinny rail running along the upper receiver, a two-piece polymer handguard, an A2-style flash suppressor (with customers having the option of adding a Smith Cortex flash hider or RRA’s Military Style or Tactical brake), M4 feed ramp cuts and a bolt forward assist. Built to near-exact AR specs, the LAR-15 A4 shoots like a well-built AR should, delivering malfunction-free, sub-MOA performance at 25 yards and beyond. For more information on the Rock River Arms LAR-15 A4 5.56mm, please visit RockRiverArms.com or call 866-980-7625.

We don’t have the sales figures in front of us. However we have reason to believe that the most popular accessory of 2013 (and maybe 2014) was the Sig Sauer SB15 Pistol Stabilizing Brace. Attaching to the buffer tube that adorns all AR-15-style megapistols and wrapping around the user’s forearm, the elasto-polymer SB15 gives shooters an “arm up” while handling otherwise sometimes awkward stock-free megapistols.

Customers can (and, in large numbers, do) purchase the SB15 alone; but Sig, masters of the AR-15 format, also packages the brace with several of its AR megapistol options, including the P516, a stock-less version of the vaunted SIG516 rifle. A piston-driven design, the P516 features a four-position gas regulator for situation-specific shooting, a nitride-treated, chrome-lined, 1-in-7-inch twist-rate barrel, Picatinny top rail and a free-floating aluminum handguard chock full of accessorizable rail. All that, plus the SB15 brace, makes for a highly accurate, reliable, and shootable megapistol. For more information on the Sig Sauer P516 Pistol, please visit SigSauer.com or call 603-772-2302. 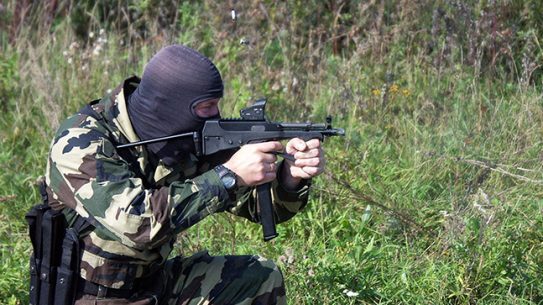 Compact pistol-caliber SMG warriors rose from the ashes after the collapse of the Soviet...