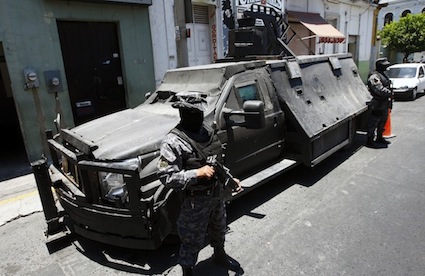 Mexican policemen stand guard next to an armoured car seized to alleged members of the Mexican drug cartel “Los Zetas” and presented to the press on May 23, 2011 in Guadalajara, Jalisco State. The armoured car called “The Z Monster” has a capacity to transport about 20 men and has a turret to place a heavy machine gun. AFP PHOTO/HECTOR GUERRERO (Photo credit should read HECTOR GUERRERO/AFP/Getty Images)

If this information is confirmed, it would represent a significant blow for the Zetas, a group considered to be the most powerful, and ruthless of Mexico’s drug cartels.

The navy said it is still waiting for forensic evidence that would confirm that one of two men killed in the firefight was indeed Lazcano. But it says that there are “strong signs” that one of the corpses in their possesion is that of the legendary drug trafficker.

According to the Navy’s statement, which was published Monday night, an exchange of fire took place on Sunday afternoon in the municipality of Progreso, as Mexican Marines patrolled the area. The Marines were attacked with grenades but managed to kill two criminals, including a man who they believe to be Lazcano, the leader of the Zetas organization.