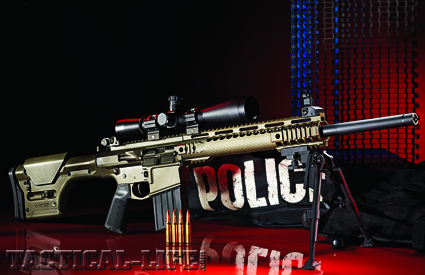 The designated marksman’s role has always been somewhat of a point of argument amongst law enforcement marksman. Although a mainstay over the years in many military organizations, it is not something that has been widespread amongst most police agencies. That is changing to a certain degree and if done correctly is a positive move.

So, what is a designated marksman? Traditionally a designated marksman is a supporting partner of the sniper on a typical two-man sniper team. I realize some military units have more than two on a sniper team, but to keep it simple, I will use the two-man model. They may be referred to as an observer as well. Often this “observer” is equipped with a semi-automatic rifle with slightly less accuracy but increased firepower — often referred to as a designated marksman’s rifle. They are generally in the same caliber as their partner’s rifle. Not always as precise as a bolt gun, but they are magazine fed with greater capacity to be faster on multiple targets. Accuracy is generally around an inch at 100 yards. The designated marksman acts as the sniper’s observer and provides cover either during approach or upon departure.

The latest conflicts have changed doctrine for sure, but it is still not unheard of. I still hear of military personnel in various units being issued old rifles with little more than a scope and being assigned as the unit “sniper” or “designated marksman.” It may most of us, there is simply a need to have both officers on the marksman team be able to fulfill the marksman’s role. Typically they will trade off responsibilities in order to stay fresh over a long period of time. Depending on the size of the team and the area of operation, a marksman team may be in place for several hours before they are relieved. I tried and was generally successful in getting teams switched out in about 4 hours, but longer deployments are certainly not out of the norm. It is simply not prudent for a number of reasons to place that burden on one marksman while the other party “observes.” For the most part, marksman teams in this day and age go through the same training and field the same equipment. The primary equipment is generally a bolt-action marksman rifle of some sort. Some certainly field semi-auto platforms, but it is pretty rare. So how does this rifle fit into the mix?

Many SWAT teams have started having their marksman units deploy with their precision rifle in a pack of some sort with a semi-auto platform in hand. This has a ton of advantages. If there is a need to perform any problem solving while en-route to a final firing position, they can do so immediately. If it does turn into World War III, the marksman has the ability to return fire quickly with the needed accuracy and capacity.