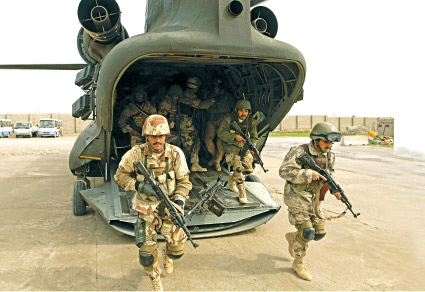 Among these changes is growing reliance on special operations forces, amply demonstrated in Afghanistan and Iraq. A major element in SOF’s growing capability is mobility. They need to be able to rapidly move to critical locations—literally around the world in a few hours. Quick movement, however, only partially defines special operations mobility. Stealth—ability to avoid detection—is an equally vital SOF attribute.

Birth of a Unit
In the early 1980s, the Army’s best aviators volunteered for rigorous training in nap-of-the-earth flights at night and in adverse weather, using night vision goggles and other special equipment. Organized in 1981 as the 160th Aviation Battalion and popularly known as Task Force 160, the unit focused on secret infiltration and exfiltration of special operations units.

In 1990, the battalion reorganized as the 160th Special Operations Aviation Regiment (Airborne), based at Fort Campbell, Kentucky. In addition to their recent ventures, Night Stalkers figured heavily in Operations Urgent Fury in Grenada, Prime Chance in the Persian Gulf, Just Cause in Panama, Desert Shield/Desert Storm in the Gulf, and Task Force Ranger in Somalia, as well as other unnamed ventures. Although the 160th is best known for action in Afghanistan and Iraq, most of its missions will remain classified for years to come.

A Role for the Chinook
SOF teams use several aircraft depending on mission distance, but helicopters handle medium-range flights since they can land and take off just about anywhere.

No helicopter is better for this mission than the MH-47 Special Operations Chinook. For 25 years, since the failed Iranian hostage rescue in 1980, the “Night Stalkers” of the U.S. Army’s 160th SOAR(A) and its predecessor unit, Task Force 160, have flown AH/MH-6 Little Birds, MH-60 Blackhawks and MH-47 Chinooks configured for missions whose success depends on their secrecy.

Growing SOF requirements worldwide have led to the 160th’s expansion, adding a second MH-47 battalion to the regiment to meet a demanding operational tempo in support of the global campaign against terrorism.

To meet this demand, Boeing Rotorcraft Systems in Philadelphia, PA, has upgraded more than 30 U.S. Army CH-47Ds, used for transport and combat support, into MH-47G Special Operations Chinooks capable of heavy assault and other SOF missions. Boeing also will convert MH-47D and MH-47E Chinooks, modernizing these helicopters to the G-model standard. By 2011, the 160th will effectively double its Chinook operational capability to at least 61 helicopters containing fully integrated cockpit management systems to perform at the forefront of special operations.

The Chinook’s 52-foot fuselage is large enough to accommodate a Humvee or up to 33 combat-equipped troops inside, or massive sling loads. Honeywell 714 engines generate more than 8,000 shaft horsepower, permitting the Chinook to lift up to 28,000 pounds—more than its 25,000-pound empty weight—and cruise at nearly 150 mph.

Tandem rotors make the Chinook very maneuverable and impervious to most cross winds. Sixty-foot diameter rotors with three composite blades overlap, so the CH-47 has a surprisingly small footprint and can take off and land more steeply than conventional helicopters.

High-tech improvements ensure that the Chinook keeps pace with military strategy and tactical changes and enhance CH-47 efficiency and capability. The CH-47’s remarkable capabilities almost guaranteed it would move beyond the limits of conventional warfare.

Generations of Helicopters
MH-47D Chinooks were the first models adapted for Task Force 160’s use in the 1980s and will phase out of service in a few years. These aircraft contain an adverse-weather cockpit with weather-avoidance and search radar and utilize an aerial refueling probe (the most obvious Special Operations feature) for inflight refueling. D-models also use forward-looking infrared, a personnel locator system for finding downed aircrew, secure voice communications, a fast rope insertion/extraction system and an internal rescue hoist. Most CH-47s are unarmed, but MH-47Ds carry machine guns and mini-guns.

The 160th lost three E-models in a mid-1990s training mishap, in Afghanistan, and in the Philippines. Deliveries of G-models will provide sorely needed new resources for the unit.

A Record of Service
The MH-47’s public record provides ample proof of its capabilities. In the early months of Operation Enduring Freedom, Night Stalker Chinooks flew more than 200 combat missions totaling about 2,000 flight hours. More than 70 missions placed special operations troops behind enemy lines. The Night Stalkers kept up a brisk pace with a 99-percent mission readiness rate. In Iraq, the 160th accumulated nearly 1,000 flight hours while carrying SOF troops across the battlefront.

How Chinooks Go Where Others Can’t
Tandem rotors feature several operational advantages, especially for heavy-lift helicopters. Without tail rotors, which typically drain at least 15 percent of propulsion power, conventional helicopters, subject to Newton’s Third Law of Mechanics, would spin uncontrollably equal and opposite to their main rotors. Two counter-rotating main rotors, linked to turn synchronously while overlapped, cancel this torque effect and convert all power to lift, making tandem rotors more efficient than single-rotor platforms, even in high, hot and humid conditions. Other bullets to consider:
– Differential collective pitch control changes blade pitch on one hub relative to the other, so pilots can move the Chinook in any direction with coordinated turns left or right, or pivot the helicopter on its center of gravity or either hub.
– Chinooks can land and take off regardless of wind direction, even with 45-knot crosswinds.  Single-rotor helicopters typically take off and land into the wind like fixed wing aircraft.
– Tandem rotors are safer in loading operations, since no tail rotor is spinning just above a rear cargo ramp.

Will V-22 Ospreys Kill The Chinooks?
All helicopters share speed and range limitations. The V-22 Osprey tiltrotor design eliminates these limits by converting from helicopter to airplane mode, rotating its engine nacelles from vertical to horizontal position so that rotors become propellers. Once converted, the V-22 can fly twice as fast and several times farther than helicopters. Ospreys will begin combat service in September 2007 with the U.S. Marine Corps. But will the success of tiltrotors and other hybrid designs curtail use of military helicopters? Not likely. Military aircraft must be optimized for specific, diverse missions. There is simply no way to adapt a fighter for bomber, transport or utility roles. The same axiom applies to rotorcraft.
Tiltrotor technology is complex and costly. It is too muscle bound for many missions that simpler platforms can perform adequately. A case in point—the Chinook is designed to move an M-198 howitzer and crew over relatively short distances in a battle theater. The V-22 has less load capacity than the Chinook, and its speed would hardly matter for a 30-mile flight. Nor is tiltrotor technology readily adaptable to small platforms V-22s undoubtedly will enjoy increased missions as users realize the breadth of their capabilities, but the range of military mission simply is too large and varied for any single platform to dominate the field. 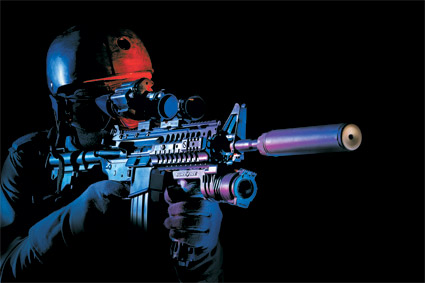