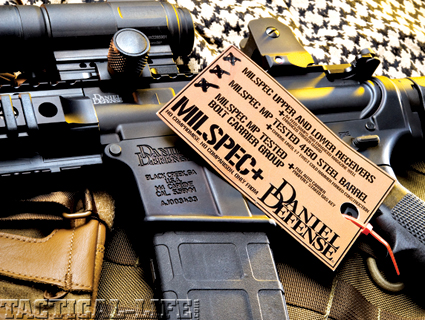 The DDM4v2 LW tested for this article features a lightweight contour barrel for lively handling characteristics. It is shown equipped with an Aimpoint CompM4.
Comment(s)

For a company with a sterling reputation for quality, a respected line of AR carbines, lucrative contracts with the U.S. military and a business model that has resulted in 200- to 300-percent growth each year since its inception, the origins of Daniel Defense may come as a bit of a surprise.

“Why did I start Daniel Defense?” asked Marty Daniel, owner and president of Daniel Defense during a recent conversation that TW had with him. “Because I had a lousy golf game.” Caught off guard, “Pardon?” was my perplexed response. With a laugh, Marty explained that back in the late 1990s he recognized that his poor golf game was causing him nothing but sheer frustration. As luck would have it, a good friend invited him to the shooting range to see if he liked that pastime any better.

“He let me try out an early Colt M16, and I fell in love,” Marty explained. The light weight, excellent ergonomics, good power, low recoil and all-around shootability of the platform wowed Marty, who had previously only fired more traditional guns like bolt-action rifles and semi-auto shotguns. Marty immediately dived headlong into the sport of shooting as an unabashed devotee of the AR-style platform. “I was relaxed when I came home from the shooting range instead of the golf range,” he told me.

His Own OEM
In devouring everything AR as part of his new pastime, Marty soon realized that, unlike the market today, the options for upgrading and enhancing AR rifles was pretty lean at that time. This came to a head for him when he began searching for a big-hole flat-topped upper receiver for his Colt SPI. He discovered that for consumers they were extremely difficult to obtain.

After coming to this conclusion, he decided to simply contract with someone to build some for him. He soon struck up a deal with Les Baer to make 100. “I only needed four, so I decided just to sell the rest,” he told me. “This is how my business that you see today started,” Marty said.

From that upper receiver, Marty went on to develop more and more accessories that he wanted, and suspected the rest of the market wanted as well. Working with that friend from the range (who just happened to be Ashley Burnsed, owner of Blue Force Gear), Ashley and Marty developed a clever sling loop attachment that proved to be just as popular.

As the company grew, Marty recognized that he needed to bring on some extra help to keep up with demand. His first employee, who is currently vice president of sales and marketing, was Jay Duncan. And it has been nothing but onward and upward for the company ever since. “Since Daniel Defense’s start in 2000, the size of the company has doubled and sometimes tripled every year,” Jay told me. He went on to tell me that as the company stands currently, it has 86 employees and is located in a 37,000 sq. ft. manufacturing facility in Black Creek, GA.

Having approached the market at the beginning as a consumer, Marty told me that it gave him a clear perspective on how he wanted to run his business. “Every time we would interact with a customer, we would ask ourselves ‘What would Brownells do?’” Marty explained. Recognizing that company’s rock-solid reputation for top-notch customer service, Daniel Defense certainly set the bar high—and has striven to maintain it ever since. “Don’t be an $%^hole is my business model for the company,” Marty told me with a laugh.

For a company with a sterling reputation for quality, a respected line of AR…