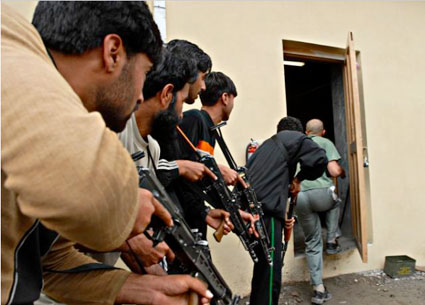 BAGRAM AIRFIELD, Afghanistan – Being one of the only three military police officers tasked with mentoring Afghan national police in an area larger than the state of Delaware means being creative.

“We were on a soft-knock in Nishagam, and we noticed that it might be good to have a specially trained team,” remembers Army Sgt. Nathan Byrd, the team’s leader “Well a couple of days later we were watching the movie ‘S.W.A.T’.”

For the three Grafenwoehr, Germany, based Soldiers from the 527th Military Police Company, the idea of establishing the first SWAT-like team made up of Afghan police in Regional Command-East, was too appealing to pass up.

Modeling the program off the Army’s own Special Response Teams, which Byrd was a former member, the three Soldiers developed a comprehensive 15-day program called Special Tactics and Training, aimed at turning an ordinary ANP officer into an expert tactical responder.

After getting permission to run the program on Forward Operating Base Bostick, the team turned to the ANP station in the nearby town of Nari for their first recruits.

“We basically went to this one police station and said, give us your best, and we’ll make them better,” one of the team’s members, Army Spc. W. Eric Mraz said.

The six selected by the ANP for the first class varied in age from 20 to 35, and the only English any of the recruits spoke was ‘yes’ or ‘thank you’.

Moving past language barriers with the help of interpreters and hand gestures, the three MPs soon realized how serious the recruits were about training.

According to Byrd, the recruits started every day with physical training so intense it was leaving their instructors tired. After that, they began their lessons for the day, covering everything from escalation of force, room clearing, hostage rescue procedures and hand to hand combat.

During the training, the MPs discovered that the men they were instructing shared many of the same qualities as themselves.

“I don’t know how these guys were picked,” Mraz said smiling. “I know we said we want the best of the best to be in this team, but it’s like they picked six guys who had our personalities.”

According to Byrd, the MPs even gave the ANP trainees nicknames similar to their own Afghan names. “There’s Jimmy, Dean, Snake, Goolie, Lizard and Rock,” he said. “Now they call each other by their nicknames, they won’t answer to anything else.”

Jimmy is the class clown and the team’s favorite recruit. The seven-year veteran of the ANP stated through an interpreter that he joined the program to better defend his country by learning anti-terrorist techniques.

“I like training for myself and for others defense,” Jimmy said. If a success, the three MPs hope their ambitious idea will be implemented in stations across Afghanistan.

“Right now this is just our trial period, our test baby basically,” Mraz said. “Once we have fined tuned all the training, that’s when we hope to propose it to other MPs who are working in other [areas of operation].

The ANP officers have decided to call themselves the Special Tactics Team, in order to differentiate themselves from other SWAT-style teams across the world.

“If I could turn on the T.V. in ten years and hear something about the STT in Afghanistan, and know I had a part in that,” Mraz said. “Well that would be pretty cool.” 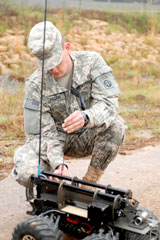 BAGRAM AIRFIELD, Afghanistan - Being one of the only three military police officers tasked…