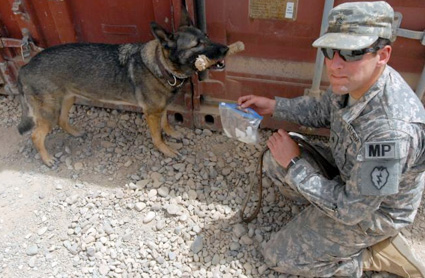 IRKUK, Iraq — Four legs are better than two when trying to evade a military working dog.

No matter how fast the dozen or so Soldiers from 15th Brigade Support Battalion, 2nd Brigade Combat Team, 1st Cavalry Division, ran, they couldn’t outrun Buli and Capka, a pair of German Sheppard military working dogs, during a demonstration on Forward Operating Base Warrior, Aug. 1.

Soldiers volunteered to don bite suits and were given a head start before the dogs were released.

Spc. Corey Jones, a Baltimore, Md., native and a water purification specialist with 15th BSB, sprinted with all his might, and although he made it farther than most, his run ended with him in the dirt and the dog still tugging on his arm.

“It was pretty rough,” said Jones. “That dog’s got a little bit of power.”

“The suit helps neutralize it, but if you weren’t wearing it [bite suit] that would be a wrap,” he joked.

“I was surprised by the amount of power,” said Spc. Stephen Price, a Spokane, Wash., native and a petroleum supply specialist with 15th BSB who observed the demonstration.

“They may look light,” he said about the dogs. “But they will take you down.”

Although watching Soldiers getting taken out by the dogs was probably the most entertaining part, it was not the sole goal of the demonstration.

“The goal of these demonstrations is to inform commanders and leaders about the type of support military working dogs can provide,” said Tech. Sgt. Matt Troiano, a Dublin, Calif., native and Buli’s handler. Troiano is a military policeman assigned to 3rd BCT, 25th Infantry Division, and attached to FOB Warrior.

The handlers started the demonstration by giving the Soldiers a class about the capabilities of the dogs, emphasizing their ability to find narcotics and explosives.

The Soldiers then followed the dogs through an area where the handlers had hidden narcotics and explosives and watched as the dogs sniffed them out one by one.

“We just hope to educate units, so when we go out with them they know what we can and can’t do,” said Sgt. Henry Rabs, a Mendon, Mass., native and Capka’s handler. “It makes running missions with them a lot easier.”

“To be able to say that a dog sniffed out an IED that could have killed 10 Soldiers is a great feeling,” he said.

Buli and Capka are just two of six military working dogs assigned to this specific team at FOB Warrior, and regularly assist the units here.

“We go on quite an array of missions,” said Rabs.

According to Troiano, when they are not on missions, the dogs and their handlers train most of the week and give demonstrations to Soldiers around the FOB.

“By educating leaders today on the capabilities of the dogs, they will be able to call on them for future deployments,” said Troiano.

IRKUK, Iraq -- Four legs are better than two when trying to evade a…