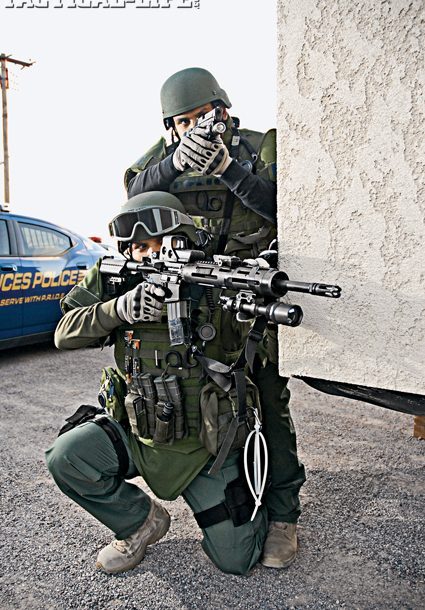 Top gunners from Las Cruces, New Mexico PD S.W.A.T. are putting their JPE rifles to use on duty and in skill-sharpening 3-Gun matches.

TW writer Dave Spaulding calls it “dropping the hammer.” It’s the Moment of Truth, when you find out how well your weapon works. Or, indeed, as sometimes may be the case, if it works at all. You should know before the fight begins, because when you’re a professional, if your gear is wrong, you’re dead. Dave and other contributors are “dropping the hammer” a lot in this issue, as TW wrings out a lineup of new firepower guaranteed to raise the eyebrows of military and law enforcement men and women.
We also have an array of features and department articles showing how training in today’s elite units is melding with the new firepower to make every mission achieve rapid, on-target results.

Moving back from close-quarters combat firepower, back to say 2,000 yards—no, further back, try 3,000 or even more—we have the Barrett M107A1. We let Marine Corps sure-shots wring out this new downrange dominator. It’s now lighter by six pounds, suppressed, and has reduced recoil. All that promises more mobility in the thick of the fight now matter how quickly the battlefield changes.

What we’re calling “a designated marksman’s dream machine,” the Centurion Arms’ MK 12 Mod 1 SPR is a 5.56mm tack driver developed from programs for Navy SEALs and Army and Marine Special Operations. Speaking of Spec Ops, the Italian Army’s extremely rare Franchi dual-action and double-duty 12-gauge is another fight equalizer of the first-rank that we put through its paces in this issue.

For a new weapon delivering a knock-out punch, check out the frontline feedback we’re hearing on the Army’s air-burst XM25 “Punisher,” which fires an assortment of 25mm loads that put the enemy in the dirt.

Optics are alongside the firearms in this issue’s coverage, including “Battle Reflexes,” a roundup of new holographic and red-dot sights that have the enemy covered. There’s also a report on how Leupold’s elite training course for lawmen is turning those behind the badge into crack sharpshooters.

Articles on superior training with today’s new arsenal of guns and loads give our TW readers an inside look at top military and LE operators in action. Don’t miss “Combat Rescue,” which focuses on the U.S. Air Force pararescuemen who do all they can to save their brothers in arms. Two S.W.A.T. features detail dynamic vs. covert entry and the weapons and training of the elite Las Cruces PD unit on the frontlines of the drug war.
If you’ve been wondering what can be done about the Somali pirates and those who aspire to imitate them, check out our two articles on the subject, in “Under Fire” and “Maritime Ops.”

There’s a full board of other new gear featured as well. Check out the first-looks from AUSA Winter Expo 2011. And don’t miss the UK’s desert Jackal APC as well as DARPA’s TIGR intelligence-gathering super system that shows commanders what the enemy is up to at any time. Without further ado, let’s get locked and loaded!